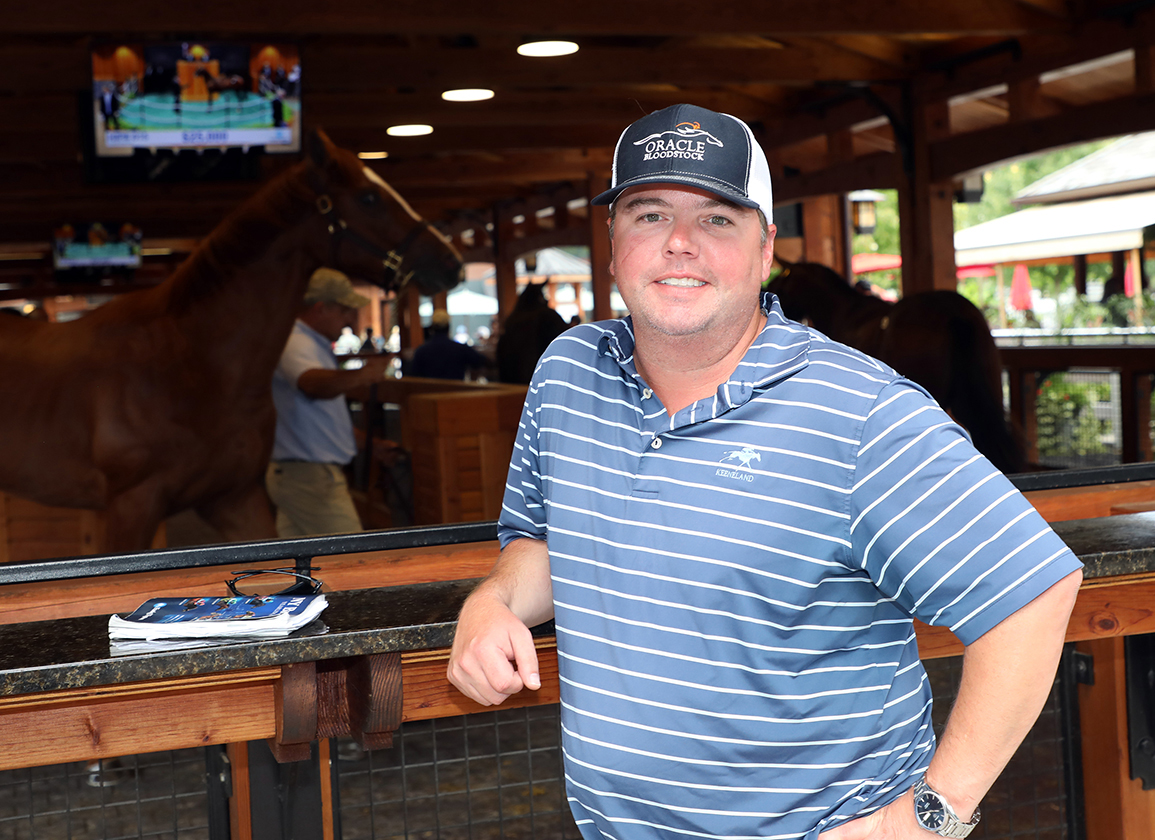 With thousands of horses on offer from the top of the market and on down, Keeneland September is unlike any other yearling sale and requires serious hard work and focus to shop effectively. We've caught up with several prominent buyers to find out how they attack the auction from pre-sale preparations and into the two weeks of selling.

This installment features Conor Foley, whose Oracle Bloodstock is active in all segments of the yearling market acquiring horses for both domestic and foreign clients. At last year's September sale, Oracle was listed agent on 24 acquisitions totaling $3,673,500. Those purchases ranged from a $1.1-million Medaglia d'Oro filly now named Hodl to a $1,500 daughter of Mizzen Mast purchased in Book 6.

This year's sale will be held from Sept. 13 to Sept. 24. Visit theworldsyearlingsale.com for more information.

TDN: How much pedigree work do you do before the sale?

CF: I don't really look at all through the catalog beforehand. The only part that matters to me as a bloodstock agent is the physical part. I think your brain can play tricks on you. It's very hard to buy good racehorses, so I just try to protect myself from making any assumptions or things like that by looking too closely at the pedigree first. So, I go backwards and look at their pedigrees last after they've passed [physical inspection]. I don't want anything in their pedigree to trigger something in my mind that makes me want to like the horse more than I should.

For a lot of mares, they only ever have one good foal, so to me, if you throw out a pedigree because the mare's never produced anything, you may end up never looking at her best horse.

TDN: Do you do many pre-sale farm visits?

CF: Rarely. I'll do that if I'm out checking on another horse that we manage and the farm would like to show us their yearlings. The horses change so much over the last 60-90 days before the sale. What do you do if you liked a horse on the farm but not so much on the sales grounds? That's tough.

Our team makes sure we look at every horse at the sale, and because we're able to do that, we can work backwards.

TDN: Talk a bit more about your buying team.

CF: I work with Jim Hatchett and [more recently] Scotty Everett. Scotty's worked on the track his whole life–the first horse he ever hotwalked was Danzig. He's a really great guy and everybody who sees him has a smile on their face. He's a super person and a very good horseman who worked for a lot of great trainers. He's retired from the track in the last couple years and he's a super addition to Oracle for the sales. Megan Jones also joined our team this year. She's fantastic and helps with a number of things.

TDN: You usually have a flock of trainers in tow at the sales, including Danny Gargan, Tom Morley, Dan Blacker, Ray Handal and Jordan Blair. What's the dynamic like there?

CF: Among others, I've also helped Rob Falcone and sometimes Doug Watson–we'll buy some of his clients a yearling with the plan of it going to Dubai as a 2-year-old.

I love it. You have all these great horsemen that I'm getting to spend time with looking at horses. We're able to accomplish other things while we're together as far as talking about horses currently in training and stuff like that.

Everybody gets along. This is pro sports, and I treat it like that. There's a level of professionalism.

As far as who ends up on which horses, things tend to work themselves out given what surface we think they'll excel on; what type of horse we think they'll be in terms of when they'll mature; what part of the country or the world we think they might fit in best. So those things whittle it down along with budgets, and I've never really had an issue [with multiple trainers wanting to go for the same horse].

It's also like a workshop for them, because they end up talking about the struggles and the things that are going well or not well in their barns. Plus we just have a lot of fun.

TDN: What's the first thing you look for when inspecting a horse?

CF: Definitely the way it moves. The walk is so important. The conformation is so critical, and our horses, for the most part, make a lot of starts. So I'm kind of looking at a horse and asking myself, “Could you ride this horse from here to Los Angeles?” Because that's how many miles it's going to take to get him fit for a race. What problems are we going to run into based on how the horse is physically made? If the horse grows or changes in this way, what impact will that have given how it's made here or there? I try to ask myself about 100 questions once a horse comes out, and when you start coming up with negative answers, you start moving on to the next horse.

TDN: Any there any mistakes you think other buyers make or things they focus on that you don't find as important?

CF: I've seen a lot of people try to embrace new technologies, and I don't think any of them really work. Somebody would've figured it out by now. This is a sport that many people have been passionate about for hundreds of years.

TDN: How do you stay organized and focused when trying to get through so many horses and make decisions about them?

CF: Luckily, in the first couple books you can pretty much see every horse on your own. As the sale gets into the later books, we have to take the team approach where I'm looking at the horses who made the cut the day before. This is the sale where you get to look at a horse the fewest times [before they sell].

The other thing about Keeneland is that the grounds are physically demanding–it's not flat. It demands the most out of you, and you just have to stick to your good decision making. I try to stay conscious of it and just keep a level mind. If you get tired, it affects the way your brain makes decisions. The September sale tests that.

TDN: You bought horses from $1.1 million to $1500 at last year's September sale. Is it tough to adjust your eyes, so to speak, when going from the top end to the lower end?

CF: I think towards the end, the good ones stand out much easier. If you're buying a horse to go to Saudi Arabia or Russia, you're probably buying a different type of horse than if you're buying a cheaper horse to stay in America. For me, you're just trying to buy the best possible athlete every day. Nothing really changes in the process–it's just as hard to buy a horse for $5,000 as it is $500,000.

TDN: Anything among your purchases last year at September that you're particularly excited about?

CF: Probably the Medaglia d'Oro filly who cost all the money. She was always going to be a 3-year-old type, and we weren't really going to tighten the screws too early on an expensive filly with that kind of pedigree, but she's coming along nicely at her own pace with Dan Blacker and doing well.

TDN: Any past KEESEP successes you're especially proud of?

CF: One horse who puts a big smile on my face is a horse called Tuz (Oxbow). We bought him for $7,000 [on the second-to-last day of the 2018 sale]. He went to Russia and won his first three starts [by a combined 64 lengths]. Then he ran in Dubai and nearly won the prep for the UAE Derby last year [when second in the Al Bastakiya]… He finished third in this year's G3 Burj Nahaar. He provided a lot of excitement for $7,000.

TDN: Any trends you're looking for or market expectations heading into September?

CF: I think this sale will be very strong–they have been for the most part all year. It's always a shock to the system at first when there are horses you think you can buy for $200,000 or $250,000–which is an enormous amount of money–and they go for $700,000, $800,000, $1 million. So, you get outbid a lot, but you have to not get upset about it. It's tough when you barely lose, but you just have to move on to the next thing until it's over. Last year was not a great year, and all the breeders deserve to get rewarded. Things haven't been easy for anybody.