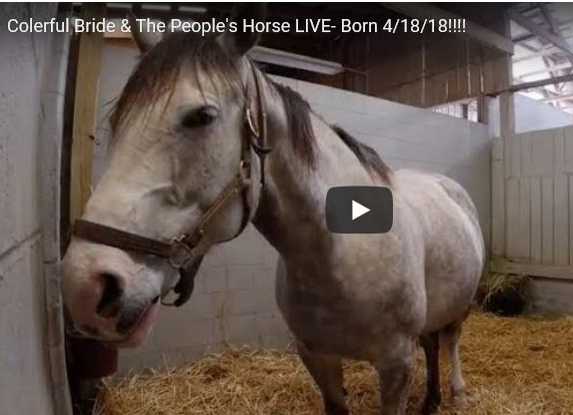 The “people's horse” is no longer just a concept.

A filly by California Chrome (Lucky Pulpit) out of Colerful Bride (Munnings) was born Wednesday evening at Taylor Made Farm, the biggest step to date in bringing journalist Geoffrey Gray's innovative concept to life.

Gray is the founder of True.Ink, an interactive magazine devoted to adventure stories. True doesn't want its readers to simply read the story but to experience it. True's readers, or members, as Gray calls them, get to go well beyond the traditional printed page. When the on-line, interactive magazine covers something like a search for buried treasure in Mexico, the readers are invited to physically come along on the treasure hunt.

Gray got the idea to involve horse racing as part of True's menu after a chance encounter with handicapper Michael (The Wizard) Kipness at a grocery store checkout line in 2015 in Saratoga. Kipness told Gray the story of a claimer he owned and the journalist was immediately captured by the colorful, suspenseful, roller-coaster ride that is racing and breeding.

So, through crowdfounding, he started raising money and began the “people's horse” project. The idea was that anyone who got involved would experience virtually everything there is to experience when it comes to ownership, breeding and racing.

All Gray needed was a horse.

Gray partnered with the team at Taylor Made, where California Chrome stands at stud, and they agreed to go in with him and his readers on a foal by the two-time Horse of the Year. The birth of the foal was broadcast live on a “horsecam” that streams the view from Colerful Bride's stall 24-7. Gray said “at least” 1,000 people watched the horse being born. He was there in person to witness the birth.

“Many people in the horse world have had that experience before, but not me,” he said. “To be able to be there and share it with our members was so once-in-a-lifetime. I'll never forget that. I'll never forget that feeling of the foal's slobber on my fingers. We have a baby girl now to look after. Oh, my God.

“I was floored and really a bit chilled by the sincerity of emotion coming from our members and our team. Literally, one night there was one horse in the stall and today there are two. One of them is ours and now we have a new member of the family to look after.”

Because True does not accept advertising, in order for the readers to share in any of the stories they must pay a membership fee. About 600 people are currently members of the “the people's horse” and memberships are still available. Prices range from $99 to $500 and additional privileges come with the pricier levels. Beyond being able to read about the foal and to watch her progress on various streaming outlets, the members were able to vote on which mare among a handful made available by Taylor Made they would breed to and they will be allowed to vote on what the horse will be named. (According to The Jockey Club records, the name The People's Horse is available). Additional benefits include tours of Taylor Made, where they can visit California Chrome, Colerful Bride and their weanling baby.

“Our challenge is to share the emotional thrill, and the ups and downs, the rawness, to share the emotions that horses can naturally bring,” Gray said. “We're not interested in it just for ourselves, we're interested in sharing it with as many people and as many members as we can. The horse is not just something that will give us personal pleasure, but can unite our community.”

Members may not be entitled to any of the earnings of the horse, which is usually the case when people pay small fees to join fan club-style setups that purchase horses. Several racetracks have opened similar stables. Rather, people are paying for the experience, one that is otherwise beyond the financial means of many.

“There's a little bit of a proletariat class element to this,” Gray said. “This is a statement where we are saying you don't need to be super wealthy to have all the fun.”

Taylor Made's involvement is part of the farm's commitment to bringing owners into the sport and Gray said none of this would have been possible without the backing and support of the farm. Will someone who went in on the “people's horse” as a bit of a lark become a more traditional owner? Gray believes they will.

“It's bound to happen,” he said. “When you put people and horses together there are marriages that happen there. Horses are addictive; the dream, the gambling, the high stakes. Those are real intoxicants. That's one drug. The other drug is the chance to be around them. Horses are such special animals.”