The Pat Smullen Column: The Time Has Come To Retire 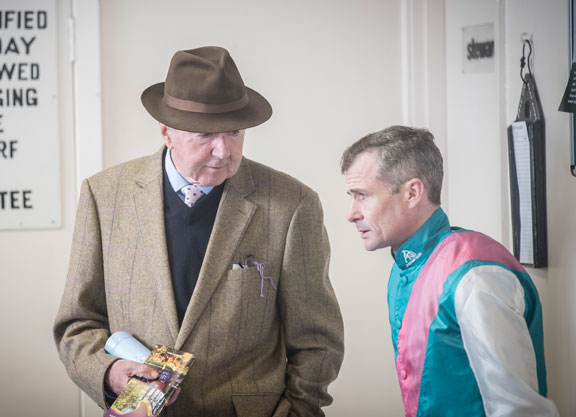 TDN's weekly columnist, the nine-time Irish champion jockey Pat Smullen, reflects on his career in the saddle as he makes an important announcement.

I am using this week's column to let everyone know that I have made the decision to retire.

I have had a frank discussion with my doctors and I gave them the full details of the way of life of a jockey, and what I'd have to go through to get back to full fitness, to get back to the weight that I need to be, and to compete at the level I want to compete at. They advised me that I should not compromise my immune system in any way. So, taking that into account, the right thing for me to do is to call it a day. I'm sure everyone will understand that while it's sad and difficult for me, it's not as difficult as I thought it might be because I see the bigger picture. My health has to come first now, and I can't compromise that.

It was always going to be a hard road to get back to race riding, and there was nobody more aware of that than myself. But, when you're faced with what I was faced with over the last 14 months, you come to realise what's most important in life, and I'm very fortunate that I'm in a position, hopefully, to live a full and healthy life from here onwards. I'm so grateful to be in that position now. Race riding was everything to me through my life and, obviously, it was always in the back of my mind that I'd make a return, but I made the promise to myself at the beginning that if everything went well health-wise, that if I wasn't able to get back to the level that I was at when I stopped, I wouldn't come back at all.

I don't want to make a huge deal of it but it's been a tough year and it has taken its toll on my body. I had two surgeries and when I recovered from that I had to then face another round of chemotherapy treatment. It was tough going but it has all been worthwhile and thankfully it has gone very well. Whatever has gone in the past in my career, and I like to think I achieved a little bit, this was the biggest achievement of all, getting through this, and I definitely now see life from a different perspective. I can never be thankful enough to the medical people who have given me a second chance at life.

I've been very fortunate through my career to meet some great people and to ride some very good horses. I have a lot of cherished memories of a great career, and I'm very thankful for that. Now it's the second chapter of my life. I think everyone has gathered by now that horses are everything in my life. I know nothing else and I'm determined that I'll still work within the industry and, hopefully, I can be of some benefit.

So Many People To Thank
I wouldn't have got through this without my wife Frances being by my side. She's an amazing woman and we've had great days together on the track as well. Our best day as a family was when she won the 1000 Guineas with Saoire (GB) and I won the Tattersalls Gold Cup on Grey Swallow (Ire) on the same day for Dermot Weld. She was a great rider herself and an exceptionally good trainer, and she gave it up to support me in my career and to raise our family. You can't ask for more from one person than what she has given me.

I have to thank my parents who allowed me to go on and pursue my dream by letting me leave school at 15, and my agent Kevin O'Ryan, who is also my brother-in-law. We've had a great relationship and he helped me to be champion jockey on nine occasions. I am also hugely appreciative of the sponsorship of Malih Al Basti through his Al Basti Equiworld.

Along with my friends and my family, I also want to thank the people that I don't even know who have got in touch with me over the last couple of months. The support I've had from the wider public has been overwhelming. I'd like to think that I treated people with respect throughout my career and I think that all came back to me in a time of need.

I served my apprenticeship with Tom Lacy only two miles away from where I'm living now. His family were so supportive, they took me in and treated me like one of their own. They gave me an opportunity to ride and one of the achievements that I'm most proud of was being champion apprentice two years running while I with Tom. That was something very special.

Joanna Morgan also gave me a great opportunity by introducing me to racehorses and she played a big part as well. As things were starting to go very well, I got the opportunity to ride as second jockey for John Oxx when Johnny Murtagh was there, and that just brought me to another level. He introduced me to big owners and better-class horses. As we all know, John Oxx is a gentleman of the sport and they were two very good years of my career working for him. While I was riding for John, I also got the opportunity to ride good horses for Tommy Stack, who was very supportive at that time as well. They were all influential people who gave me an opportunity which I'd like to think I took with both hands.

When Michael Kinane moved to Ballydoyle, Dermot Weld was looking for a stable jockey and, thankfully, he took a chance on me. His main owner at the time, who is still there, was Moyglare Stud. I have to thank Stan Cosgrove, who was the manager of Moyglare at the time, for being supportive of taking on a young rider that was inexperienced and give him an opportunity and obviously that was backed up by Mr Haefner. Eva Bucher Haefner took over the running of Moyglare Stud from her father and both she and Fiona Craig have continued to be a great support, never more so than over the last 14 months, for which I am greatly appreciative.

We all know that these jobs don't come around too often and there was an element of being in the right place at the right time for me, but those people took a chance on me, and gave me that opportunity to ride at the highest level and I'll never be able to thank them enough. I'm sure I frustrated Dermot for the first couple of years, trying to filly Mick Kinane's boots was never going to be an easy task. I made mistakes but, thankfully, we got through that and we had a very fruitful partnership for the next 15 years after that.

It's the stuff of dreams to get the opportunity to ride for the likes of Dermot Weld and while I've had the last year out and have been thinking about things, I have realised how fortunate I was that those people let me live out my dream of being a top jockey. I feel my biggest achievement was the fact that I was able to hold down the job with Dermot for the amount of years that I did. That's something I'm very proud of. I'd like to think I was consistent throughout my career. I might not have done anything brilliant, but I think I was consistent, the whole way through. I think that's very important in a stable jockey's job, and that's what I loved being, the stable jockey.

It's All About The Horses
I'm not prepared to stop riding horses, and I want to get my body back in shape to be able to ride out in the mornings, and hopefully that will happen in the very near future. As a rider I always loved the mornings. I loved getting the feel of a good horse and I think my feedback in the mornings was pretty good as well. I'm looking forward to getting back to riding work. It will give me that buzz that I need.

That's what strengthens me, the excitement of getting back on a horse and the sooner that happens, the better. I've been fortunate to have ridden so many good horses over the years. Vinne Roe (Ire) came along early in my career at a time when I needed a good horse. He just cemented the relationship with Dermot and allowed me to prove I was able to ride a horse at the highest level. He came back year after year in the St Leger and we ran second in the Melbourne Cup to Makybe Diva, and fourth in the Melbourne Cup as well. To win five Classics on one horse is just something quite special. He's the one horse I have a real soft spot for and always will have.

Dress to Thrill (Ire) is probably the most unfortunate horse that I've ever ridden in that she won the Matriarch and the Sun Chariot, and the following year those races were upgraded from Group 2 to Group 1, so she should have been a three-time Group 1 winner. She was an amazing filly and she showed that when she beat Golden Apples (Ire) and Banks Hill (GB) in the GI Matriarch in Hollywood Park. That was a great day.

Another very important filly in my life was Covert Love (Ire). The first time I saw her was in the paddock before she won the Irish Oaks and I am very grateful to Mark McStay, her co-breeder, for asking me to ride her.

I was very fortunate to ride a lot of good horses for Moyglare, such as Refuse To Bend (Ire), and also Sheikh Hamdan and Juddmonte, and then His Highness the Aga Khan came on board. The best day of my career was winning the Epsom Derby on Harzand (Ire). That was just a huge, huge day for me. I know it's a bit of a cliche, but it is a childhood dream to win the Epsom Derby if you want to be a Flat jockey. To achieve that, and at a time in my career where I actually appreciated it and took it all in on the day, was fantastic. He was a great horse, and to end my career after winning an Epsom Derby, I think it's a fulfilled career.