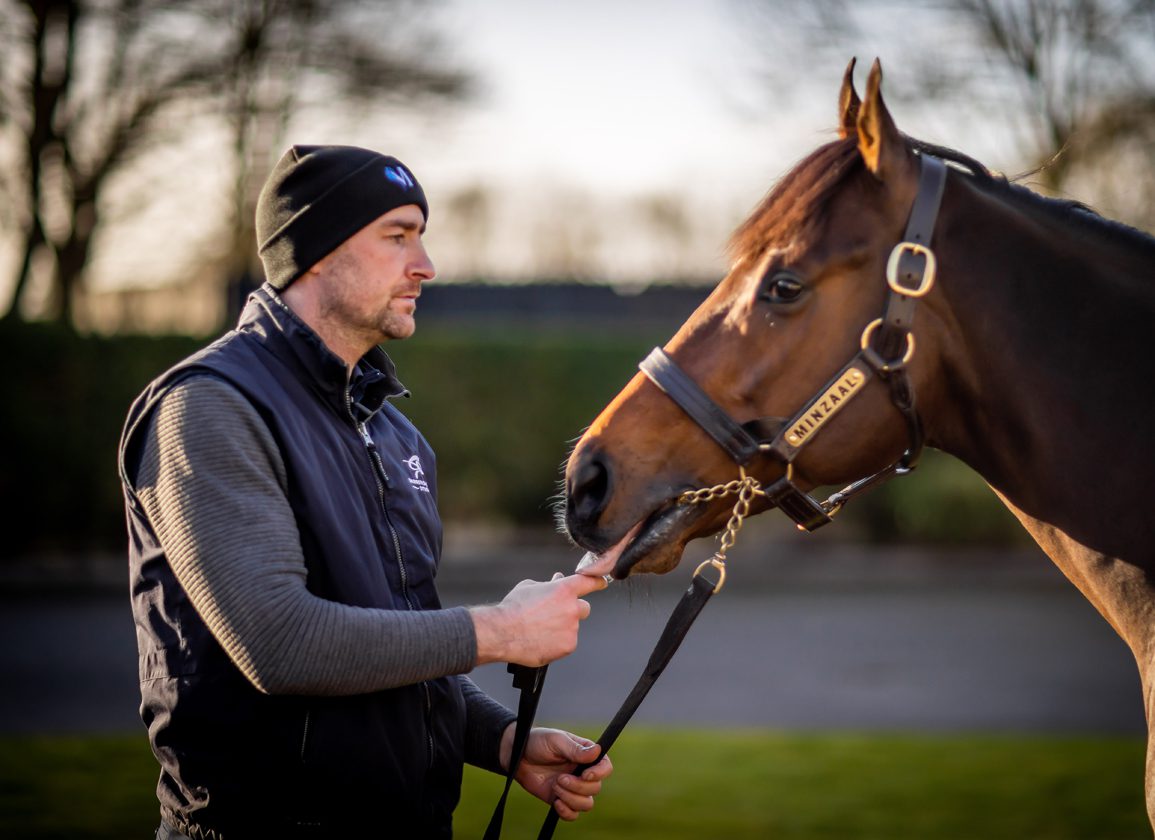 Minzaal: has provided a buzz at Derrinstown Stud | INPHO/Morgan Treacy

One of the early highlights of the year for pedigree buffs and casual observers, the Irish Thoroughbred Stallion Trail, got underway with a bang on Friday with heavy footfall reported at over 30 of the stallion farms taking part in the two-day extravaganza.

The TDN Europe team were out and about in the Kildare area on Friday and visited Kildangan Stud, The Irish National Stud, Yeomanstown Stud and Derrinstown Stud before venturing further south on Saturday.

Don't let the sunny snaps fool you, Friday was another bitterly cold day, but Night Of Thunder (Ire) warmed the cockles followed by emerging forces Earthlight (Ire) and Ghaiyyath (Ire) at Kildangan Stud.

In fact, such was the quality on show at Kildangan Stud, nominations manager Eamon Moloney described the current collection of stallions on offer at the Irish arm of the hugely-powerful Darley operation as the best he's seen during his time at the helm.

Moloney said, “We've had good horses here in the past but we have a mix of stallions who are operating at the top of their game, like Teofilo (Ire) and now Night Thunder climbing his way to the top-and you don't know how far he might go-right through to Ghaiyyath, Earthlight and Blue Point (Ire) with his first runners this year. I don't think we've ever had a more exciting roster. “

It was not just the seasoned breeders who turned out in their droves, either, on Friday. Moloney reported a good mixture of industry stakeholders and families searching for an alternative day out to be coming through the gates at Kildangan and predicted Saturday to be even busier.

He said, “The Thoroughbred Stallion Trail is a very important initiative. It provides you with an opportunity to showcase your new horses and gives everyone a chance to see them in the flesh. A lot of breeders have been here already but they love coming back to see the stallions a second time. There's also a social aspect to the whole thing and the amount of new people who come through the gates for the Thoroughbred Trail-we've even attracted clients who had never been involved in this industry prior to the initiative, so it's very important. “

It won't take a genius to sell Ghaiyyath to breeders. He may be a Dubawi (Ire) and his dam was no giant, but this boy commands attention wherever he goes, with his giant stride and powerful makeup clearly capturing the attention of those in attendance on Friday.

Moloney commented, “I don't think we had one negative comment on a Ghaiyyath or Earthlight foals. Not one. The Earthlights are just so sharp and strong. I really think they have a huge chance. With Ghaiyyath, people seem to stop and stare at him in silence. His foals are the same-they are very athletic. I think we are in very good shape, to the point that Ghaiyyath will cover his biggest book of mares in his third season, which isn't the normal trend. He's not your typical Dubawi-he has this big walk and has great presence. Those great horses seem to have presence.”

He added, “We've had a good mixture of breeders who are going to be sending us mares and families who are making a day of it viewing the stallions. There are plenty of racing enthusiasts as well, and they love coming to see the horses up close in the flesh, so there's a great mix. It's brilliant.”

“We're very pleased and it has provided us all with a lift here at Derrinstown. He's a Group 1-winning sprinter and was an absolute flying machine as a racehorse so we're all very excited about him,” – Joe Behan.

Geographically, Kildangan is just over 10 minutes from the Irish National Stud, and many of the same faces made the short journey to see Invincible Spirit (Ire), Lucky Vega (Ire), Phoenix Of Spain (Ire) and more. 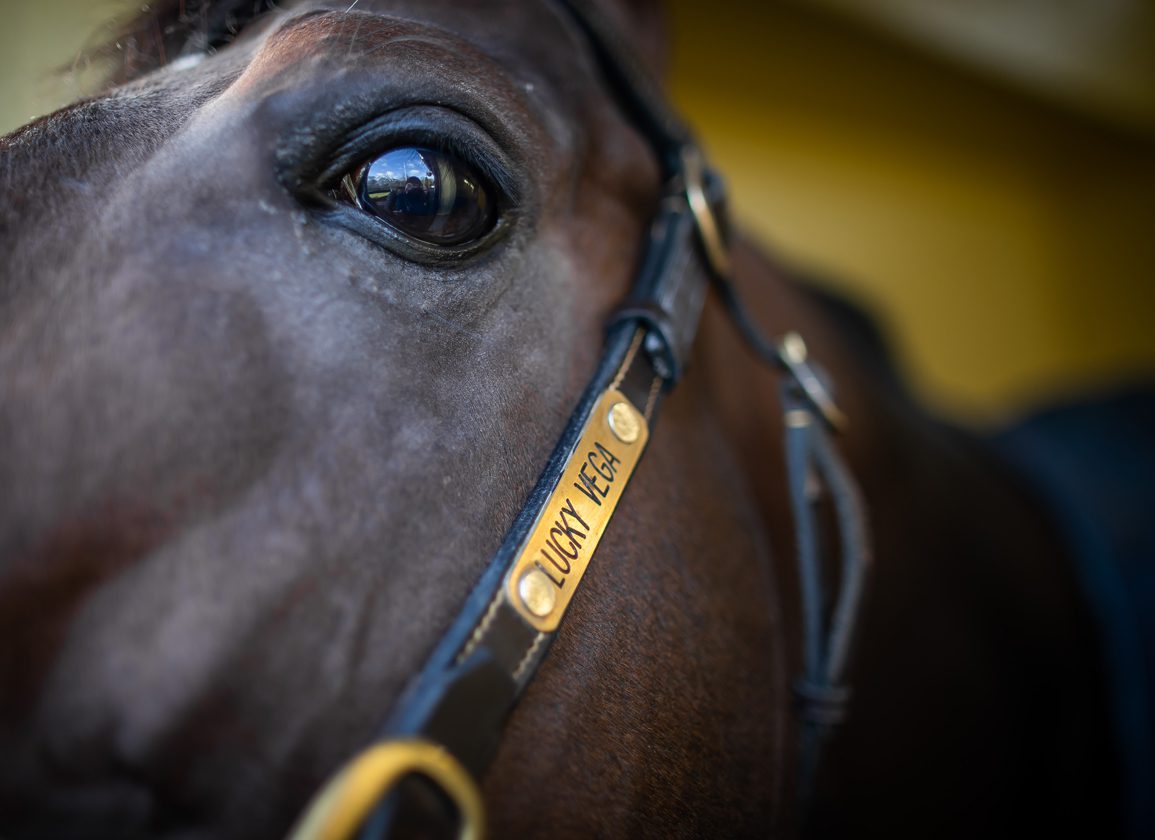 At 26 years young, Invincible Spirit has been there and done that and is widely recognised as one of the best producers this country has to offer. But standing on the opposite side of the long row of boxes at the beautiful Irish National Stud could be the heir to Invincible Spirit's throne, the powerhouse that is Lucky Vega, who has done extremely well since he retired from racing and is letting down into a bull of a stallion.

Lucky Vega showed top-class form at two, including when carrying the colours of Yuesheng Zhang to victory in the G1 Phoenix S., and his owner's pursuit of top-class broodmares to support the young stallion was one of the major stories to emerge from 2022. He certainly won't lack for support.

Nor will Minzaal (Ire). Derrinstown Stud manager Joe Behan admits that the past 12 months have not been easy for anyone working with the operation after the man he affectionately refers to as 'the boss,' Sheikh Hamdan Al Maktoum, passed away.

However, Group 1-winning sprinter Minzaal is proving a beacon of hope at Derrinstown and is understood to be oversubscribed already such is his popularity among breeders.

Behan explained, “Minzaal is going down very well with all the breeders. There has been nothing but positive comments on him today and he's taking everything in his stride. He's a good model, very correct and makes great use of himself. He has a great walk and has a nice bit of length and scope to him as well.

“We're very pleased and it has provided us all with a lift here at Derrinstown. He's a Group 1-winning sprinter and was an absolute flying machine as a racehorse so we're all very excited about him.”

He added, “There is a buzz around the place. The past 12 months have not been easy since the boss passed away so, to get that buzz back and have everyone rowing in behind Minzaal now, it means an awful lot. It's great.”

Great, too, is the confidence behind Invincible Army (Ire) at Yeomanstown Stud. Dark Angel (Ire) is still very much the daddy of them all at Yeomanstown but, despite the fact they are facing into one of the hottest years one can remember in terms of the fight for first-season sire honours, the O'Callaghans are predicting big things from Invincible Army this year.

Rob O'Callaghan said, “We're very confident with Invincible Army. He's got great stock coming through and has a lot going for him with over 130 2-year-olds this year. They are well-bred horses and they've got the strength, the action and they have gone to the right homes as well. Karl Burke, Richard Hannon, Ger Lyons, Richard Fahey and Clive Cox have all bought yearlings by him and he's got as good a chance of any of the first-season sires to make a big impression this year. You've got to remember that he was a top-class racehorse and was a Group winner at two, three and four.”

Friday was the only day that Yeomanstown opened their doors to the public and O'Callaghan labelled the initiative as a success before pointing to the fact that many breeders visited with a view towards getting a glimpse at some of the younger sires the stud has to offer.

He added, “Technically, this is our only day on the Thoroughbred Stallion Trail but we are open every day of the year. We've plenty of shows booked in for tomorrow [Saturday] and the past few weeks have been very busy with showing. We'd a busy morning today with a lot of people starting the Trail here and working their way on to other studs.

“It's been a good day and we've had a good mixture between breeders and casual visitors. We're glad to have them and it's good to see people enjoying their day. When you have a new stallion it's always busier. Also, a lot of people like to come and see a stallion in his second year at stud to see how they have progressed during the summer.

“These stallions change so much from year one to year two. It's amazing and I think it's important for breeders to come back to see a horse in his second year at stud to get a proper viewing. It's hard to judge a horse straight out of training because they are fit and go to stud off the back of a hard two or three years galloping. When they have had that first year's covering and a summer of grass under their belt, they change a lot.”