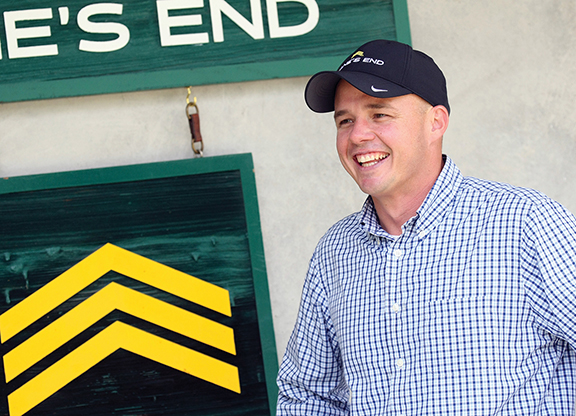 Implementing The Jockey Club’s proposed cap on numbers of mares bred would most certainly boost demand for unproven and moderately priced proven stallions. The overarching problem is the commercialization of breeding thoroughbreds, but one way to mitigate that would be to implement the cap.

Stallions’ ability to breed large numbers of mares has distorted their stud fee values. Horses that breed extraordinarily large books are either underpriced intentionally or perceived in the market as a stallion on the way up that may stand for significantly more in years to come. It’s hard for me to speculate on other stallion farms, but more than likely this is not done by accident–it’s intentional, either to eat up market share of the mare population, perception in the market, or a philosophy that the quality of mare doesn’t really matter and there are just more ‘boots on the ground’ for the stallion. Either way, such practices only contribute further to an already extremely volatile stallion, yearling and foal market.

Implementing the cap would correct the stud fee market by forcing stallion owners to be very precise on pricing their stallions in order to maximize their revenue. Doing this would also force mare owners to consider other maybe not-so-commercial, but certainly viable, proven and unproven stallions. I believe most breeders are against the commerciality of the breeding industry but are forced to ‘play the game’ in order to try to be profitable. What would help them be more profitable with these types of stallions is my next point.

If the cap were implemented, yearling buyers would have to look at another stallion’s progeny much closer. They want product. If there aren’t 60-70 and sometimes more, yearlings in the September sale by each of the top few proven or first-year stallions that year to choose from, they’ll have to look elsewhere and therefore reward breeders who supported the other stallions.

The extreme up and down of number of mares bred for most stallions only exacerbates the problem. Good stallions who have shown their ability never fully reach their potential because they’re in a constant cycle of big and small crops. Young stallions that get off to a solid but not extraordinary start are never really given a chance. The market gives up on them before they’ve really matured and therefore their owners are forced to give up on them since they are deemed unmarketable. The examples of this are endless, ones that we’re all aware of. Implementing the cap would not only disperse mare numbers and reduce the volatility of numbers of mares bred but would ultimately be better for the breed, better for breeders and stallion owners.

Have an answer you’d like to submit? Email [email protected]