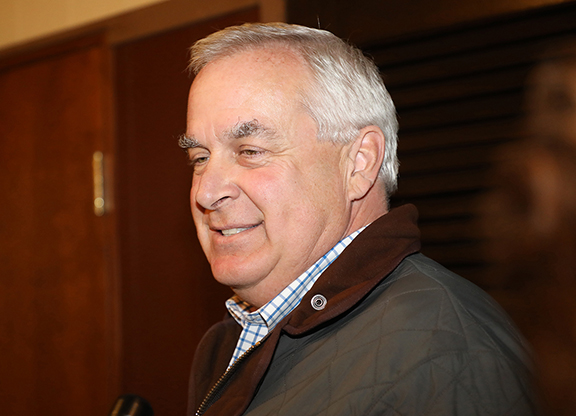 All week in this ongoing series, we have been talking to stallion managers and others about the difficulties in filling books for stallions other than first-year and premier stallions.

In terms of the difficulties of filling books for third- and fourth-year stallions, I would say that we have been lucky this hasn't really been a problem at Claiborne. However, I have seen it be tricky for some of our less-expensive stallions. The different incentive programs that other farms offer have probably hurt us because breeders can breed elsewhere for deep discounts and that's something we have tried to avoid. I think we do two things that help us fill these books.

First, we try to price them with the third and fourth year in mind when they first begin at stud. When we start the horse off, we don't set the fee to get as much as we can get the first year, just to lower it the third and fourth year. For example, Mastery and Runhappy have both been set at $25,000 all along. Many stallions have gone through our program and have had the same fee for their first four years.

My point is, when we set the fee the first year, we set it at a number that will create demand and still be able to maintain a steady book of mares for the next few years.

People hate it when a horse is set for one price the first two years and then that fee is cut in half for the third and fourth year. I get that frustration and it's not fair to our loyal customers.

Secondly, our book size is smaller than what you may see elsewhere. A big book at Claiborne would be 143 mares, which is how many Mastery had last year. Runhappy had 127. I think this also helps create demand in the first few years.

We've been lucky that the weanlings from these stallions have sold well. They've been in demand and have had good averages, which may be because there hasn't been an overabundance of them. The fact that we set the fees at reasonable prices allows us to pick and choose through the mares the first couple years. This creates a buzz so that people will breed to them in the third and fourth year.

Mastery is in his third year and he's full. Runhappy is in his fourth year, and he's also full. He may be a bit of a different beast in that Mr. Mclngvale has marketed this horse like no other stallion has been marketed before. I think another thing that helped Runhappy at the yearling sales was the $100,000 bonus for winning an open maiden race at Saratoga, Del Mar, or Kentucky Downs.

When you consider filling books for our older proven stallions, I would say it's been difficult not just this year, but that it has been this way for a few years. For the middle-range proven horses, I think that limiting book size will push breeders back into the more proven horses. The change in the book size is much needed.

If you look at the expensive stallions for this year, it's different in that we have 10 stallions in Kentucky that stand for over $100,000, and right now they're probably not all full for what their farms would like them to be. Five years ago, there were four stallions that stood for over $100,000. These 10 stallions will probably breed 1,500 mares of those stallions several will breed well in excess of 150 mares. Therefore, in a couple years several of these stallions are going to have a lot of high-dollar stud fee yearlings going through the ring that the breeders won't make money on. I just wonder if spreading those mares out would help everyone in the long run.

When you get to the sales and see an overabundance of offspring from certain expensive stallions, it certainly can't help their averages and it doesn't help whoever is trying to sell offspring by that stallion. It seems like the bottom 25% of the yearlings by those stallions sell at a loss.

Everybody in this business likes to breed to the fashionable horses, the ones that will sell well. They're looking for the stallion that they can make the biggest score with. I think some of these “middle of the road” proven horses are hurt because they're considered to be to vanilla. You can try to sell them, but you won't get people going crazy over them like you will for something by a freshman sire. You end up taking mares for these workmanlike stallions that you wouldn't normally take, and this really doesn't do anyone any good.

The book size change is a long time coming. Years ago, people would get upset when a farm would syndicate a stallion and there would be 75 to 80 mares in a book. Then when Alydar started breeding over 100 mares, people just couldn't believe it. When you think about it, even a horse like Danzig wouldn't be able to make it in today's breeding world. By not giving some of these sound, well-bred Grade III or Grade II winners a chance eliminates a horse like Danzig or others to make an impression on the breed because you can't get enough mares.

So the book size change would help certain stallions get opportunities they wouldn't get otherwise by spreading mares around. Is it going to help drastically the first year? Maybe not right at first, but it will certainly help down the road.