Home » Archive » Shared News » The Next Generation with Shayna Tiller

The Next Generation with Shayna Tiller 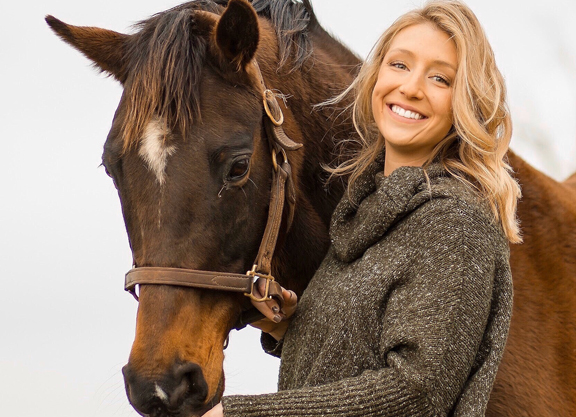 The TDN has partnered with Amplify Horse Racing to present “The Next Generation,” an ongoing video series featuring young people who were not born into the Thoroughbred business, but are now excelling within the industry.

Growing up next to Laurel Park, 24-year-old Shayna Tiller always felt a strong attraction to horse racing. But it wasn't until she was in college that she decided to pursue a career in the industry.

On a whim, she applied for an internship with the Saratoga Special. After spending one summer at the Spa, she was hooked for life. Over the past four years, Shayna has been on a whirlwind tour of the industry- doing everything from foaling out mares, chasing down a story on the Saratoga backstretch, working as an exercise rider, and interning for Fasig-Tipton.

Last year, she graduated from the Irish National Stud course. She now works as the Director of Sales for Mill Ridge Farm, and also shares her passion for promoting the stories of the people behind the sport through the 'Riders Up' Podcast she created with roommate Autry Graham.

KR: How did you get involved in horse racing?

ST: I'm originally from Laurel, Maryland and I grew up 10 minutes from the racetrack there. My mom and sister are deathly allergic to horses, ironically, so no one in my family was really into it. But my parents are from Bowie, Maryland and my dad always liked to go to the track and he took me with him a couple times. I did one Pony Pal ride there, and I was sold for life.

So I rode horses growing up, and I did a school project in high school on Lasix in horse racing and I interned with some of the state vets there at Laurel and Pimlico. I learned all about it and was kind of hooked from that point.

When I was in college at the University of Maryland, we had to apply for a fake internship as part of the general education requirements. I found an ad for the Saratoga Special, and just decided to apply. So I shipped up to Saratoga, didn't even know what a blacktype race was, and I was interviewing Todd Pletcher the next day.

They put us up in a barn apartment above the McMahon's Farm. Ann McMahon drives a car with a license plate that says 'Funny Cide One' on it. They raised Funny Cide and he was my favorite horse growing up. So I thought, “Well, I want to come back and learn more.” So I spent my winters with them, and any break I had from college, I was there.

I transferred my last year of college to a smaller agricultural school in Pennsylvania to get more hands-on experience. I galloped in the mornings and interned with the Thoroughbred Idea Foundation when it was in its beginning stages. Then I was with Fasig-Tipton for a while before going to Ireland for the Irish National Stud Program last year.

So I guess as a new person in the industry who knew that I knew nothing, I wanted to get a full perspective on the industry and I was just eating it up. I think that's what's so cool, is that people in this industry really allow you to do anything you're interested in.

KR: What was it that drew you to this industry?

ST: I think that it's all rooted in a love for the horse. I went to college to be a vet, but when I was going through it, I realized I didn't really want to do that. When you grow up as a little horse girl you think you're either going to be a barn manager or maybe manage a tack shop or be a vet. So when I found horse racing, I just saw that you can actually go and make a career for yourself and work in a dynamic industry, and that's what drew me in.

Being in Saratoga, it's the most inspiring place you can be, really. I was around the top horses in the country and the top trainers- the people you see on TV. I wanted more and more of it, and it snowballed from there.

KR: What is your favorite part about this business?

ST: I really love the sales. I think what's so cool about them is you sell horses at different stages of life and you're trying to find where they're going to peak. It's also a bit of a matchmaking project with each horse, so it's really neat seeing them grow, especially the foals to yearlings and the yearlings to 2-year-olds. You're trying to find the perfect match of who's going to purchase them and then you get to see them go on and win races and become big bad race horses that you've seen since they were babies. There's really nothing like it.

KR: Tell us about what you do now.

ST: I'm the Director of Sales at Mill Ridge Farm. Mill Ridge was founded by Alice Chandler in 1962, which is really special for me, being a woman in the industry as well. She was just inducted into the Hall of Fame this year. So it's kind of cool to be a female working here and carry on her legacy.

In my position, I oversee all of the sales operations, so that consists of recruiting, seeing the horses prep and placing them in sales, and then working in marketing to make sure they reach the right buyers and communicating with clients to help them succeed. I get to do a lot of different things, which is what's so fun. No day is the same, and obviously going to the sales is a whole other job when I do that.

Another fun thing I do with my roommate Autry Graham is we started a podcast called Riders Up. We're two young girls in racing and we like to have conversations with different people on the podcast and talk about their lives. It's not your stereotypical handicapping podcast. You don't want our picks. We tell the stories behind the business, and it's really fun. You can find us on Spotify or Apple Podcasts, and we have an Instagram that we interact with a lot too.

KR: What are your career goals?

ST: I've always wanted to have my own consignment, so that's something that I'm getting a little taste of here at Mill Ridge. I'm hoping in the next 10-plus years, I'll be able to do that on my own.

KR: If you could change one thing about this industry, what would it be?

ST: I think if I could change one thing, it would be how we interact with the public. I come from a family that knows nothing about horse racing, so every time we have our newest public scandal or whatever the situation may be, I hear it from the public's standpoint, rather than our standpoint as an industry. I think it's so important for us to educate the public and tell them what's really going on and be more transparent, because the more transparent you are, the less you have to lose.

I also think we need to work to appeal to the public. My friends all used to go to the Preakness and they wouldn't even watch a horse race during the day, but they all got hooked on it from there, and it made them want to go back for more. It was more like a sporting event for them than a serious gambling experience. So I think we need to improve our engagement with the public.

KR: What was it like being a total newcomer in the sport?

ST: I was definitely very intimidated when I first started in racing. It just seems completely isolated and you don't really know how you're going to break that barrier. I got into it pretty late. I was in college when I first started, and I was around people who have grown up in it their whole lives and knew all these things that I didn't even know were possible.

I've found though, in racing, how much people do embrace you once you actually get into it and show you want to learn. I have had so many great people who have helped me along the way. It's kind of incredible. I don't know why they've done so much for me. So I think that was the initial struggle, but now I just feel really lucky to be a part of it, and it's amazing how much people help you.