The Name You Know: Uncle Mo 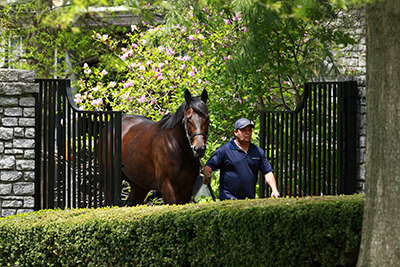 As we were discussing last week, Ashford's Uncle Mo, the 2015 Leading North American Freshman Sire by a mile heading into the Breeders' Cup, is one of nine sires with 30 or more weanlings catalogued in the upcoming November sales. But he is also the only sire with more than 40 mares catalogued in foal in the sales, in fact there are 60 mares in foal to Uncle Mo catalogued in the two sales. (See entire table here.)

Six of the nine sires with 30+ weanlings catalogued, as we said last week, are first-crop weanling sires, meaning their first foals were born this year, in 2015. The three non-F2015 sires with 30+ weanlings are F2013 (first 2-year-olds) Uncle Mo, F2014 (first yearlings) The Factor, and Scat Daddy, whose first foals were born in 2009 (oldest now 6-year-olds) but who has exploded commercially this year. Scat Daddy has 33 mares in foal catalogued at the November sales, 15 of which are in Fasig or Keeneland Book 1.

Four of the 10 sires with 30+ mares catalogued in foal stand at Ashford: Uncle Mo (60), Shanghai Bobby (37), Scat Daddy (33), and Declaration of War (30). Shanghai Bobby and Declaration of War (who stood his first season at Coolmore in Ireland, and incidentally we hear rave reviews of his foals from other sources than the farm which stands him) are two of the four sires with their first foals this year, along with WinStar's GI Haskell winner Paynter (33) and Claiborne's 2013 GI Kentucky Derby winner Orb (31).

For a table of leading sires by weanlings catalogued, click here.