Home » Archive » Shared News » The Making Of A Glamour Filly

The Making Of A Glamour Filly 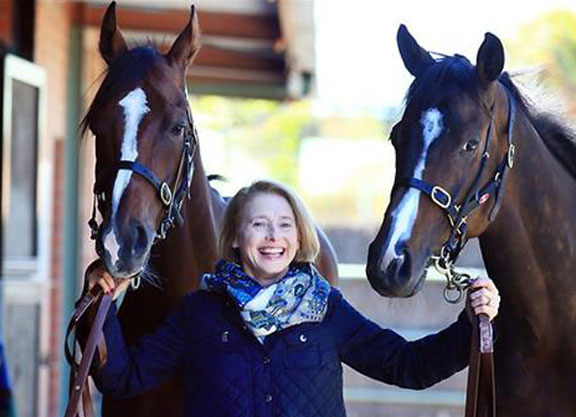 One-hundred-sixty-eight hours, 868 kilometres (540 miles), two States, two Group 1s, one filly–Global Glamour (Aus) (Star Witness {Aus}). A $A65,000 ($US46,000) purchase by bloodstock agent James Bester from Magic Millions 2015 has written her name into the history books. It was Elaine 'Legs' Lawlor and Anna Seitz who cleverly formed a group of high-profile women in racing to own this magnificent filly. Many of her lady owners have already cemented their positions as racing royalty, but Global Glamour's recent performances have given them the thrill of a lifetime that only horse racing can.

Three years and three days before the 2016 G1 Flight S., Kevin and Tanith O'Brien and their son James, who manages the family property, Lauriston Thoroughbreds, were eagerly anticipating the arrival of Testa Rossa (Aus) mare Spectacula (Aus)'s fourth foal. While horse racing is fueled by hope and passion, no one could have ever envisaged the great heights that this Star Witness filly would reach.

When people come to me enquiring about horse ownership, a common misconception is that you need hundreds of thousands of dollars, and to be male, to participate. Well, 40 women and a A$65,000 filly quashed that theory. Another common theme is that people dream of having a metropolitan winner, maybe at Randwick, which might be the equivalent of having a winner at Churchill Downs in the U.S. or Newmarket in the U.K. Now, imagine winning the Acorn and the Oaks seven days later, or the Coronation S. and the 1000 Guineas in one week. It's inconceivable.

How could this happen? I believe that there are two major contributing factors. We race drug free and our horses are raised as naturally as possible. They are not wrapped in cotton wool and therefore they are quite simply tougher. Let's take one of the more internationally controversial drugs, Lasix, a diuretic, which prevents horses from bleeding. I certainly don't want to see horses bleeding, but if used incorrectly, it can have fatal side effects, and even if it is used correctly, it is a performance- enhancing drug that prevents horses from 'backing up.' Horses excrete excessive amounts of water and electrolytes in a short period of time, therefore their recovery rate is much slower and this costs owners, and this industry itself, millions of dollars. Lasix also shortens horses' careers.

When the O'Brien family were notified of the impending birth of Spectacula's fourth foal, five people did not descend upon the mare and she was not standing in a stable. The mare would have been running around the paddock with her mates for the past 11 months before being brought into her own quarter-acre paddock ready to foal down. While the foaling manager aids the mare where required, she is in a natural environment and encouraged to give birth unassisted. This idea of allowing them to be horses flows throughout their careers. They are raised in the paddock, not a stable, and they rest, recover and strengthen at farms at regular intervals while they are in training. If a child or a teenager has been selected as a future athlete, he or she is not locked in their bedroom for 23 hours a day, 365 days of the year, before heading out onto the track for one hour of practice. They are running around with their mates being constantly physically and mentally stimulated. This is how horses Down Under are reared and it sure does produce a tough, athletic racehorse.

Adrian Bott, my co-trainer, and I inspected Global Glamour together on Sunday morning after she won her first Group 1–the Flight S. She skipped out of her stable and had a real glow about her coat. She was thriving. We knew then that she would be on the first float to Melbourne (868km, or 540 miles, away) to prepare for the Thousand Guineas, which would take place six days later. Adrian and I believed in the filly. Global Glamour's best asset is that she has a high cruising speed and she was able to use this at the notoriously tricky Caulfield track. She did all of the 'donkey work', on this track that she had never even set eyes upon, and in the opposite direction, which makes her win all the more meritorious. Her performance was scintillating. She had everyone in racing talking and tongues wagging around the world. When we girls were gathered on the podium, James 'the Lothario' Bester produced one of the all-time greatest quotes: “All my life I have wanted to satisfy 40 women at one time, and today I did so in 96 seconds.”

Global Glamour has now gone for a short rest and she will return to prepare for a Group 3 at the end of December, which leads into the $2-million Magic Millions 3 Year Old Guineas two weeks later.