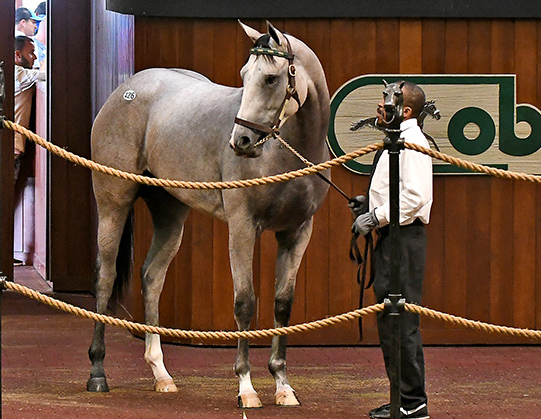 Bill Heiligbrodt's East Hickman Bloodstock took home hip 426, a daughter of The Factor for the day's top price. The juvenile was one of 13 to bring six figures during the session. The gray was consigned by Ciaran Dunne's Wavertree Stables, which also consigned the day's second-highest priced offering, a colt by Macho Uno (hip 486), who sold for $155,000 to Good Friends Stable. Wavertree was the session's leading consignor with seven sold for $551,000.

“I think everybody has been pleasantly surprised how strong the market has been, how solid it's been,” Dunne said. “I think the fact that there are people there for the bottom-end horses and those horses are selling, rather than coming up here and RNA'ing or being scratched, it gives it a bit of a buzz. It gives it the feel of a live auction. It gets everybody a little bit more upbeat. We've sold all but one to this point. We took our lumps where we needed to take them, but we've also had some bright spots. So I've been really happy with the market.”

The OBS June sale concludes with a final session, which includes a section of horses of racing age, Friday beginning at 10 a.m.

Heiligbrodt Strikes for The Factor Filly

Bill Heiligbrodt went to $180,000 to acquire a filly by The Factor during Thursday's second session of the OBS June sale. The gray (hip 426) is out of America's Friend (Unusual Heat), a full-sister to Grade I placed Bel Air Sizzle. She worked a quarter-mile last week in :20 4/5.

“The best thing I liked about her is that she's fast,” Heiligbrodt said with a laugh when asked about the filly's appeal. “She's a very good physical. All of these horses are a gamble, as you know, but she looks like she might be able to do something. She probably can run short, long, maybe on the grass.”

Bred by Madeline Auerbach and Catherine Parke, hip 426 sold for $85,000 as a Keeneland November weanling and was purchased by Ciaran Dunne's Redwings for $92,000 at last year's Keeneland September sale. She was consigned by Dunne's Wavertree Stables.

Heiligbrodt, who signed for the filly in the name of his East Hickman Bloodstock, admitted it's been challenging buying at OBS this week.

“We've shopped a lot, but we've not been able to buy anything until today,” he said. “It's competitive for the good horses.”

As the juvenile sales season concludes with the June sale, Heiligbrodt said he attended each auction on the calendar.

“It's all been competitive for the top horses,” he confirmed. “Especially this year, it's been very competitive.”

Brian Lynch, who trained Private Zone (Macho Uno) for Good Friends Stable, will now train a Macho Uno colt out of a half-sister to that multiple Grade I winner for those same owners after bloodstock agent Nick Esler signed the ticket at $155,000 on hip 486.

“He had a good outlook, a very good temperament, and he's correct,” Esler said. “He did everything right and ticked all the boxes. Obviously Brian trained Private Zone, so that is what drew his attention to him. And he's an overall, good-looking colt.”

The gray colt, who worked a furlong in :10 1/5 last week, is out of the unraced Black Lace (Afleet Alex). The $175,000 Keeneland September yearling, was bred by Adena Springs and was consigned by Wavertree Stables.

Esler, who has been training in New York since 2012, has joined forces with California-based bloodstock agent David Meah and was signing his first ticket for the partnership.

“I took a step back from training in November,” the Englishman said. “I'm working with David, trying to get his business up and running on the East Coast. He's got the West Coast covered, so I'm to get some clients buying for Christophe Clement at the sales. Brian was good enough to let us buy this horse for him.”

Of the market this week in Ocala, Esler said, “There haven't been a lot of good ones, but we have found a few. We bought an Old Fashioned colt (hip 226) [Wednesday] for cheap that we thought we got value for [at $35,000]. And I thought this horse was well bought at $155,000 today. He has a little bit of quality and we're happy to have gotten him.”

Of his transition from trainer to bloodstock agent, Esler said, “It's a different way of life, away from home a lot, but I'm enjoying it.”