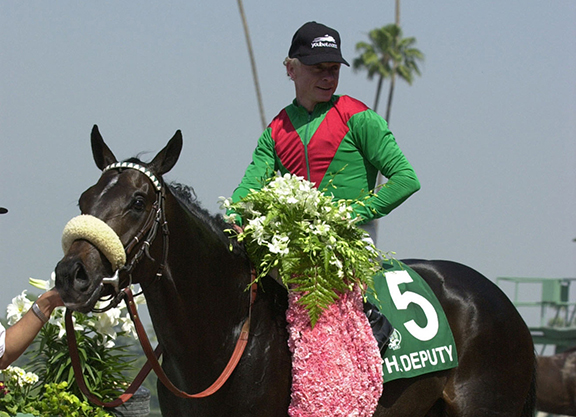 The Deputy (Ire) (Petardia {GB}), winner of the 2000 GI Santa Anita Derby and second choice in that year's GI Kentucky Derby, was rescued from a kill pen in Texas earlier this month by his old connections, Barry Irwin's Team Valor, Gary Barber and trainer Jenine Sahadi. The 24-year-old, who had stood stud in several states, was reportedly bought cheaply in Iowa and sent to a feedlot north of Dallas, at which point word quickly spread on the internet and made its way to The Deputy's past connections. By utilizing the Thoroughbred Aftercare Alliance network, Irwin, Barber and Sahadi enlisted Donna Keen to pick up and transfer The Deputy to her TAA-approved Remember Me Rescue in Burleson, TX, where he will live out his days.

“We decided to have Donna quarantine The Deputy for a while, do some diagnostic work including bloods and a fecal and not reveal anything about the rescue until we were certain that he was healthy, as Donna warned us that horses from feedlots can contract diseases quite readily,” Irwin said. “When the tests all came back negative [Wednesday] and the vet-check proved unremarkable, we decided it was time to tell the story, not to portray ourselves as heroes, but to put an end to the salacious, untrue and unfounded tales that had been circulating online. We want to thank those horse lovers who helped us in our endeavors.”

“We are thrilled to have been able to help the original connections and to be able to take care of the horse and share him with visitors to our rescue,” Keen said, “He is, as could be expected, a bit underweight at this time, but when he fills back up and once again looks the part we look forward to showing him off here in Texas. We are very honored and proud to have been selected as his forever home.”

Barber said, “I have always had a soft spot in my heart for The Deputy. He was my first Grade I winner.”

Sahadi added, “He was the easiest horse to be around. All class. He meant a lot to me and my barn.”