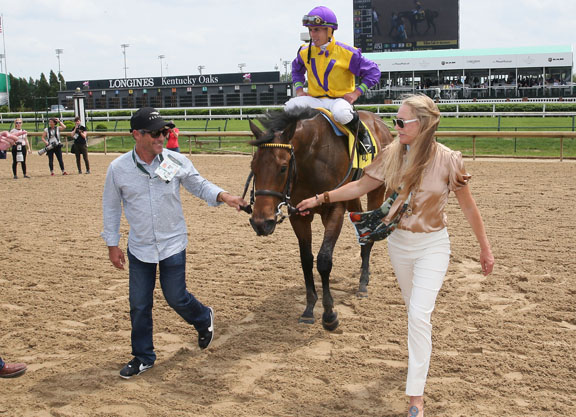 Christina Jelm was already fielding phone calls from prospective buyers just minutes after Ms Headley (The Big Beast) crossed the wire first in her debut at Churchill Downs Wednesday, with one particularly memorable text exclaiming, “The Beast has been Unleashed!”

Jelm, more often buying horses for clients than herself, and Washington-based trainer Mike Puhich teamed up to buy the filly from the first crop of 2014 GI King's Bishop S. winner The Big Beast for $20,000 at the OBS March sale.

“There was a group of us shopping around and I had a short list put together that I had given to some of my clients, including Mike and [trainer] Tom VanBerg,” Jelm said. “They loved her. She went up to the ring and we couldn't believe we got her. I expected her to cost a lot more money, but I think a lot of horses flew under the radar at that sale.”

The speedy filly was expected to transition swiftly from sales horse to racehorse, according to Jelm.

“We thought she was the type of filly that would be able to move right on,” Jelm said. “Our original plan was to go to Keeneland and break her maiden there. It took us just one extra work longer and so we ended up here at Churchill.”

The filly is a celebration of old friends and colleagues. She was named after trainer Karen Headley and entrusted to trainer Wesley Ward.

“Mike Puhich and Wesley and Karen and Tom and that whole crew, we've all grown up together and have been in the business a long time,” Jelm said. “And they are wonderful horsemen. So we just thought it would be special to name a horse after Karen and we thought Wesley would be the perfect trainer to get her out early. And that's what we expected this filly to do based on what she showed us at the sale.”

Watching a filly she owns race was a different experience for Jelm.

“I was a nervous wreck,” Jelm admitted. “I've owned horses, but it was back in the day. But for the price she was purchased for, I didn't think I could go wrong just going for the ride myself.”

As for expectations for Ms Headley's debut, Jelm said, “I expected her to put in a good run. I know she is fast, her pedigree is all speed. Hopefully she'll show us she can stretch out as we move on. She is very level-headed and she is very professional.”

Ms Headley debuted in the silks of the late Hall of Fame trainer Jack VanBerg, a mentor to Jelm, but it may be the only start she makes in those colors.

“Money talks and cash screams,” Jelm said with a laugh. “Wesley has done a wonderful job with her and we are so thankful and we would love to her stay with Wesley no matter what happens. But right now, we are just enjoying the day with a whole collection of old friends and great horsemen. It was fun and amazing.”T