The Best Kentucky Derby Field Ever? 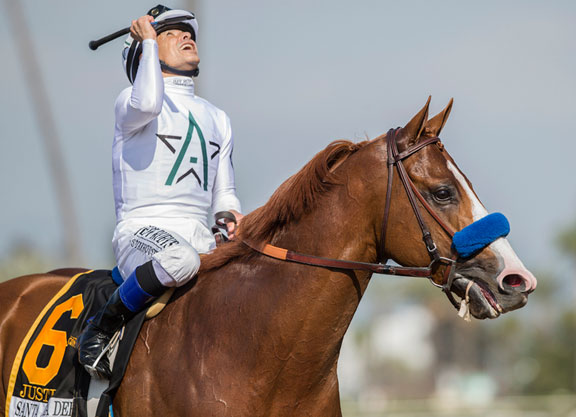 You had an Eclipse Award winner redeem himself and score a decisive win in the GII Toyota Blue Grass S., and even he couldn't hold center stage for more than 50 minutes or so. Good Magic (Curlin) had barely cooled out from his win at Keeneland when along came the freakishly talented 'TDN Rising Star' Justify (Scat Daddy), who won the GI Santa Anita Derby with aplomb and likely cemented the role of GI Kentucky Derby favorite. Good who?

That's the kind of day it was and the kind of prep season it has been. These 3-year-old monsters keep coming, one after another, strutting their stuff and pumping their chests and racing like they are in a hurry to get to the Hall of Fame.

Audible (Into Mischief), Mendelssohn (Scat Daddy), Good Magic, Justify, Magnum Moon (Malibu Moon), even Bolt d'Oro (Medaglia d'Oro), who hardly disgraced himself when second in the Santa Anita Derby. The next level down, which includes horses like GII Tampa Bay Derby winner Quip (Distorted Humor), GII Louisiana Derby hero Noble Indy (Take Charge Indy) and Solomini (Culrin), is also loaded with good colts. This is as deep and as talented a group of Kentucky Derby contenders as most of us have seen in our lifetimes, and it very well could be the best group to ever converge on Churchill Downs for America's favorite horse race.

Derby experts will tell you that the 1957 Kentucky Derby may have been the best ever when it came to the quality of the field. The second, third and fourth-place finishers (Gallant Man, Round Table and Bold Ruler) all made it to the Hall of Fame and the race winner Iron Liege might deserve to be in there, as well.

Claiming that the 2018 group is the best ever might be a bit of hype and it's certainly speculation, but it's undeniable that this crop of Derby-bound 3-year-olds is spectacular, and that point was again driven home Saturday.

The festivities started with the GII Wood Memorial S., which was just a nice race. That's not going to cut it in this year. Trainer Todd Pletcher, who is loaded, won the race with Vino Rosso (Curlin). It was a good showing after he was flat when fourth in the Tampa Bay Derby and kicked off a huge day for John Gunther's small breeding operation. Gunther is also the breeder of Justify.

The Wood featured some pretty healthy bumping between Vino Rosso and runner-up Enticed (Medaglia d'Oro), but the stewards made the right call by not taking Vino Rosso down. A Wood winner has not come back to win the Kentucky Derby since Fusaichi Pegasus in 2000, a streak that appears certain to continue.

Good Magic hadn't embarrassed himself when third in the GII Xpressbet Fountain of Youth S., but it was not the type of performance most expected from a horse that had won the GI Breeders' Cup Juvenile in his prior start. That's why, for him, the Blue Grass represented a fork in the road. Would he be the horse who had won the Breeders' Cup or the horse who had little kick in the Fountain of Youth. If the result were the latter, he was not going to be a factor in the Kentucky Derby.

Whatever happened in the Fountain of Youth happened. Good Magic was back on his game Saturday, winning by 1 1/2 lengths. It was not an explosive performance, but it was more than good enough. In most any other year, with his credentials, he would be a solid Derby favorite. This year, he could be third of fourth choice.

Then came the main event.

Justify has been the talk of the sport since his electrifying maiden win Feb. 18 at Santa Anita. From that day on, no one has doubted his talent, but he didn't exactly fit the profile of a Kentucky Derby winner. He did not race at two, did not race around two turns until March, winning an allowance, and the Santa Anita Derby was his stakes debut. He presented trainer Bob Baffert with a challenging situation, but Baffert has managed it marvelously.

None of which meant he had to win the Santa Anita Derby. The opposition included Bolt d'Oro, a two-time Grade I winner as a 2-year-old, the winner of the GII San Felipe S. (via disqualification) and a horse that might have come into yesterday's race undefeated had he not had a terrible trip in the Juvenile. Justify was done facing tomato cans. He was stepping into the ring with a heavyweight who packed a knockout punch. And Justify, a winner by three lengths, had no problem beating him. What he has accomplished in the span of 48 days…horses just don't do that.

Yet…I still must point out that he had a dream trip in the Santa Anita Derby. After competing in two five-horse races, he lined up against just six opponents and the crafty big-race rider Mike Smith undressed his rival jockeys. Justify was left alone on the lead through fractions of :23.96 and :47.85 and the only horse who presented even the slightest challenge at any point in the race was Bolt d'Oro. There will not be seven horses in the Kentucky Derby and he will not get to an uncontested lead through fractions more befitting a $12,500 claiming race somewhere.

Justify deserves to be the Derby favorite, no matter what happens in the one remaining prep, the GI Arkansas Derby, which figures to be another very good race. But that doesn't mean he has to win and it doesn't mean he is the best horse. We are just eight days removed from an afternoon when Audible looked very good winning the GI Florida Derby and Mendelssohn left us breathless in his win in the G2 UAE Derby.

I can't tell you who will win the Kentucky Derby. I can tell you it will be a horse who will go down as one of the best in modern times. Of that, I am sure. You beat this bunch and you are something extra special.