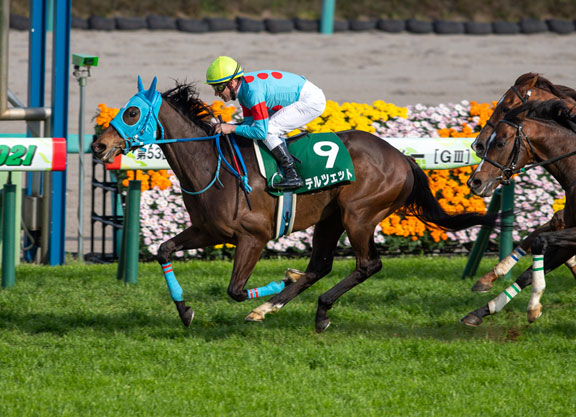 Deep Impact (Jpn)'s Terzetto (Jpn) closed from off the pace to win the G3 Lord Derby Challenge Trophy at Nakayama on Saturday. The 4-year-old filly brought her record to five-for-six with the score.

Third choice at 5-1, Terzetto raced well off the pace set by My Style (Jpn) (Heart's Cry {Jpn}). The field was well strung out due to a demanding pace, with the first half-mile covered in :45.60. She began to edge closer nearing the far turn and swung out four deep to challenge with a quarter mile remaining. Rallying widest of all, Terzetto sped past My Style inside the final 100 metres to win by a length. Catedral (Jpn) (Heart's Cry {Jpn}) was second, a neck to the good of Bom Servico (Jpn) (Daiwa Major {Jpn}). My Style held fourth another three-quarters of a length back.

A Nakayama debut winner in December of 2019, Terzetto was third there last March stepped up to 2000 metres, but returned to winning ways cut back to a mile at Niigata in August of 2020. Two more victories at that trip in Tokyo followed-on Nov. 1 and on Jan. 31. The Lord Derby Challenge Trophy was her first time trying black-type.

After Terzetto's victory, the late Deep Impact is now the sire of 172 black-type winners, 138 at group level. The 4-year-old filly is the first instance of a stakes winner by the former Shadai resident out of a Danehill Dancer mare. That past Coolmore Stud sire is responsible for 73 group winners and 133 black-type winners overall.

A winner of an 1200-metre sloppy dirt affair as a 3-year-old, Raddolcendo has three winners from four to race, with the Lord Derby Challenge Trophy heroine her best to date. She has a 2-year-old colt by Orfevre (Jpn), a yearling colt by Daiwa Major (Jpn) and was bred to Duramente (Jpn) last spring.