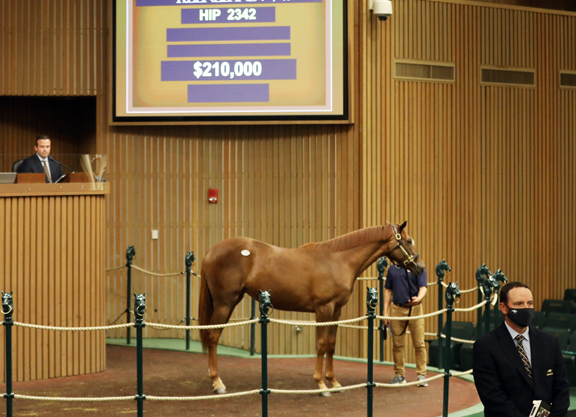 The Keeneland September Yearling Sale opened its first of two Book 4 sessions with a workmanlike day of trade in Lexington Sunday. C.J. Johnsen made the day's highest bid, going to $210,000 to acquire a filly by Ghostzapper (hip 2342) for his CJ Thoroughbreds. Three yearlings tied for the day's second highest price of $190,000: a colt by Maclean's Music and a pair of colts by first-crop sire Unified. A total of 31 yearlings brought six figures on the day.

Corey and C. J. Johnsen's CJ Thoroughbreds struck late to secure a filly by Ghostzapper (hip 2342) for a session-topping $210,000 Sunday at Keeneland. Consigned by Peter O'Callaghan's Woods Edge Farm, the yearling is out of multiple stakes winner Saxet Heights (Outflanker). Bred by SF Bloodstock, she was purchased by O'Callaghan for $130,000 at the 2019 Keeneland November sale.

“We've been on her since yesterday and she's kind of one of those I kept falling in love more and more with her. So I'm glad it worked out,” said C. J. Johnsen.

Of the filly's appeal, Johnsen said, “You can't go wrong with Ghostzapper. And then the pedigree, the first three dams are very strong. When I first saw it, I thought, 'An Outflanker mare?' And I thought I had to do some research on Outflanker, but it turns out that, even though the sample size for the cross is small, it has produced two 2-year-old winners out of the three that have been on that cross. So the pedigree was just enough for us to go for it because physically, she is absolutely gorgeous.”

The filly will be trained by Wesley Ward.

CJ Thoroughbreds has purchased six yearlings-all fillies–at the September sale, led by a $335,000 daughter of War Front (hip 5) during the auction's first session.

Johnsen said he has found the Keeneland marketplace this week to be unpredictable.

“It's been strange. When we've thought we wouldn't be able to afford a horse, we have been able to and then when we thought we could afford a horse, we were blown out of the water,” he said. “Day one, we bought three horses and didn't think we'd be able to afford any of them. And we came away with all of them for much less than we thought. And then on day two, I don't think we bought anything because we'd think, 'Oh, this one is going to go for $250,000,' and it goes for $450,000. So it's been really unpredictable.”

When Jackie's Warrior (Maclean's Music) romped home in the Sept. 7 GI Runhappy Hopeful S. at Saratoga, he gave owners Kirk and Judy Robison their first Grade I winner in over two decades in the sport. The Robisons, who purchased the colt for $95,000 at last year's Keeneland September sale, added another colt by Maclean's Music to their roster when trainer Steve Asmussen signed the ticket on their behalf at $190,000 to acquire hip 2038 Sunday at Keeneland.

“Steve Asmussen is at the sale buying for me and he trains for me in the East,” Kirk Robison said from his home in El Paso Sunday afternoon. “He loves Maclean's Music and we have the really good 2-year-old colt. Sometimes buyers go back to what horses worked for them before; the same stud, the same family and they have confidence. I think they also know what a certain stud should look like. And if they look like that horse, I think they like them even more.”

Hip 2038 is out of stakes-placed Yes Liz (Yes It's True) and was consigned by the Vanlangendonck's Summerfield on behalf of Barbara Banke's Stonestreet Thoroughbred Holdings.

“We are pretty picky on the vetting. We don't have to have a perfect vet, but we've got to have something that works,” Robison said of his buying goals. “The ones that have to have a chip removed right off the bat are not the kind I want. I want a horse that can get to the races early and show us what they can do.”

Robison, who owns a string of pizza restaurants in Texas, continued, “We are still shopping. We want horses who are going to be early and who are sound. Steve is a pretty good judge of that and he doesn't get too carried away because he knows what price point I'm comfortable with. If he has to stretch a little bit, I let him do that. I don't try to micromanage him because he has such a good track record.”

Asmussen is signing tickets for Robison in the name of Downstream Racing, a tribute to the next generation of racing fans in the family.

“Those are my grandchildren-they are getting old enough now I got a license for all of them in California this summer to go to the races at Del Mar, and then of course COVID hit and it's limited,” Robison explained. “So Downstream Racing is our grandchildren and their ownership in horses now.”

“He looks fantastic, he's happy and I trust [assistant trainer] Scott [Blasi] and Steve get him to race on time and I think he'll run well,” Robison said

Of his colt's impressive Hopeful victory, Robison said, “I had never had a Grade I winner until him. I've only been in a handful of Grade I races and never been lucky enough to win one, so I know how hard it is. I don't care how much money you're spending or what kind of mares you're breeding, it's hard to get a Grade I winner. So when you get one and they win so easily and he runs a faster seven-eighths than any other Hopeful has been run, well you get all of that wrapped together and he's so sound, it's amazing. He won at Churchill and he won twice at Saratoga, we think he'll run well anywhere. Hopefully he'll run well at Belmont.”