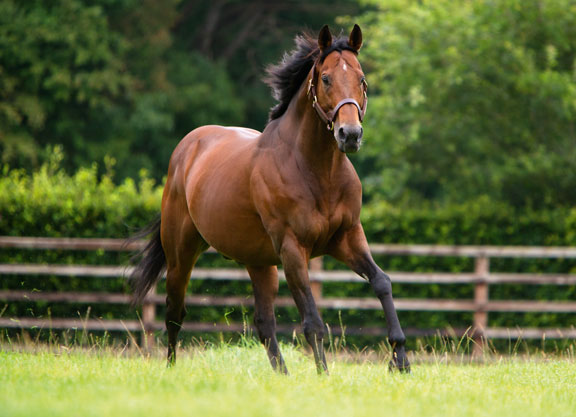 Going four-for-four when plundering June's G1 Prix Saint-Alary over 10 furlongs at Chantilly, Sheikh Hamdan bin Rashid Al Maktoum's Tawkeel (GB) (Teofilo {Ire}) maintained her unblemished record with a battling success tackling the same trip in Saturday's G2 Shadwell Prix de la Nontette at Deauville. The 1-2 favourite was positioned second as British raider Frankel's Storm (GB) (Frankel {GB}) established a clear lead through halfway. Easing closer rounding the home turn, she was confronted by Tickle Me Green (Ger) (Sea The Moon {Ger}) soon after cruising to front on the bridle with 300 metres remaining and kept on resolutely under late rousting to deny that tenacious rival by a half-length. Godolphin's Alkandora (GB) (Nathaniel {Ire}) was best of the rest and finished a further 3/4-of-a-length back in third.

“Turning for home, it looked to me as though she was going to win as easily as she did in the Saint-Alary, but she had to fight,” admitted Jean-Claude Rouget. “I felt it was the combination of two factors as she definitely needed the race and the ground was too soft for her. I didn't want to be too hard on her in morning work at home and, anyway, at the end she won safely and the essential has been done.” Looking ahead to a return to elite-level company, the trainer continued, “The target has always been the [Oct. 4 G1] Prix de l'Opera [at Parislongcamp] and she should be at her best for that race although I hope that the ground will not be too soft come the day.”

Winning jockey Cristian Demuro added, “I remained in the centre of the course in the backstraight and didn't go after the pacemaker [Frankel's Storm] because I didn't want to do too much too early. When the other filly [Tickle Me Green] came head to head in the straight, I knew my filly would give me more. She responded well and is all class, but the [very soft] ground was definitely against her. She is very strong, mentally, and that is one of her main qualities. Nothing bothers her and, looking at her right after the race, she behaves like she has not made any effort. That is the sign of a good horse.”