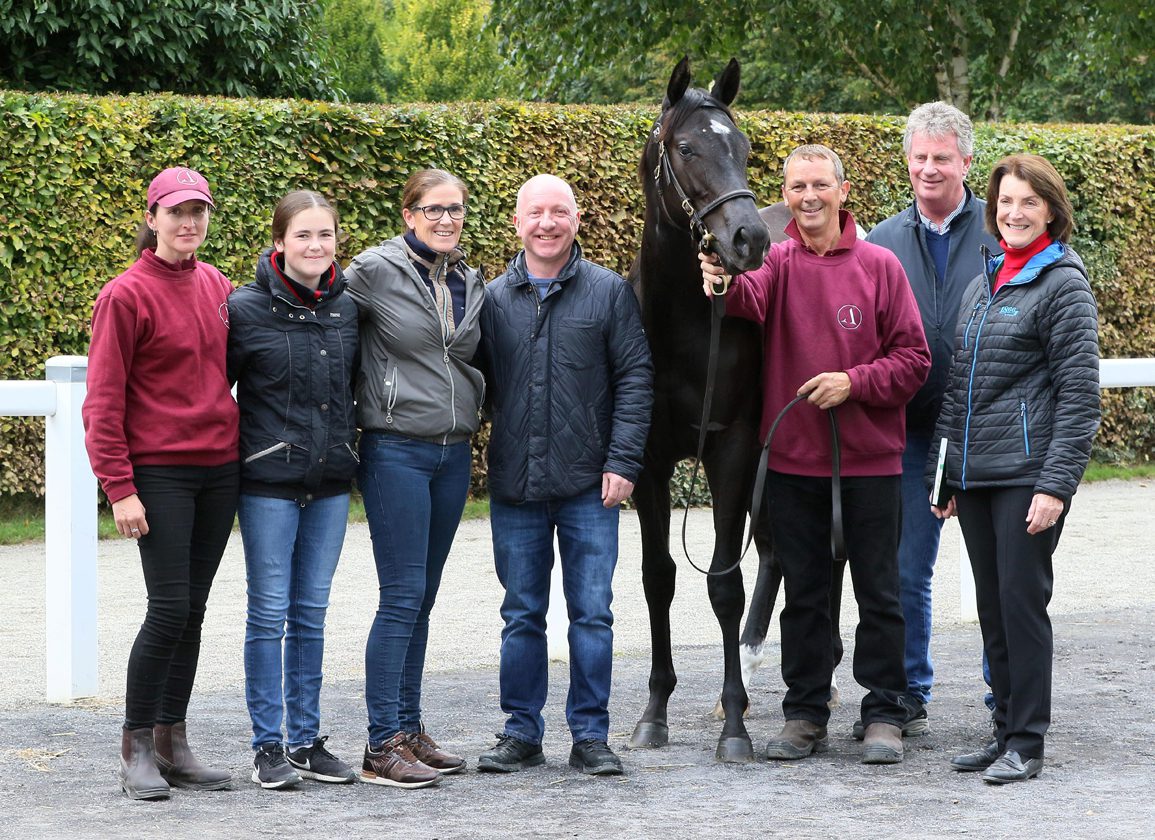 Lot 713: with connections from Abbeville Stud after selling for a record price | Peter Mooney/Goffs

More records were broken at the Goffs Sportsman's Sale on Thursday as David Ryan went to €300,000, the highest price ever paid for a yearling at this sale, to secure a Ten Sovereigns (Ire) filly (lot 713) on behalf of Rabbah Bloodstock from Abbeville Stud.

Trade sky-rocketed at the Orby Sale on Tuesday and Wednesday and the opening session of the two-day Sportsman's Sale at Goffs was much the same.

Of the 245 yearlings offered, 217 found new homes, representing a clearance rate of 89%. However, what was most impressive was the amount traded, with the €6,094,500 that exchanged hands through the ring representing a 54% increase on last year's turnover.

Despite having to pay a record price for the Ten Sovereigns filly, Ryan, manager at Kilfrush Stud, revealed the sum was pretty much where he expected to go.

He said, “She's for Rabbah Bloodstock and will come back to the farm in Kilfrush before we decide who trains.”

Ryan added, “She really should have been in the Orby as she was a standout on the day. Especially the way the fillies were selling in the Orby.

“I know that Ten Sovereigns is a first-season sire and is unproven but it has worked before with No Nay Never. She was always going to make good money.”

The Sportsman's picked up pretty much where the Orby left off when Joe Foley went to €62,000 to bag the first horse through the ring, the Newlands House Stud-drafted Bungle Inthejungle (GB) brother (lot 521) to black-type performer Funny Money Honey (Ire), on behalf of The Bronte Collection.

Foley, who has been one of the biggest players on the European yearling sale circuit so far this season and spent over €1 million on eight horses at the Orby, also revealed the colt would be trained by Karl Burke.

Foley said, “He has been bought for the Bronte Collection. I bought the Lowther S. winner Living In The Past (Ire) (Bungle Inthejungle {GB}) off Paddy Burns and I'm delighted to be able to go back to him. I liked the cross and he looks fast. He'll be trained by Karl Burke, who also trained Living In The Past.”

The proud Carlow man went on to snap up a Le Brivido (Fr) filly (lot 633) from Churchtown House Stud for €42,000 later in the afternoon.

Those hoping to make hay while the Americans were away suffered something of a blow when Torie Gladwell, who picked up two yearlings at the Orby, remained for the long haul and added a colt by Invincible Army (Ire) (lot 535) and a filly by Ten Sovereigns (lot 653) for €70,000 apiece.

All of Gladwell's additions, signed for under the banner of Top Line Sales, will return to Ocala Florida, where she is based, with the long-term plan being to prepare them for a breeze-up sale.

She said, “We bought two in the Orby and two today and all will come back to America to breeze. We came to Europe to get a sportier, earlier type of horse. The Invincible Army colt is nice and, with the filly, we thought that she would mix well with the American bloodlines in time.”

In G1 Prix de l'Abbaye-bound Teresa Mendoza (Ire), Ken Condon has one of the best progeny of Territories (Ire) in his stable, and the Curragh-based trainer added another filly (lot 702) by the Dalham Hall-based stallion to his string for €80,000.

Consigned by Hollyhill Stud, the Territories filly ranked highly on Condon's list, and the trainer's confidence was boosted by the fact one of the most respected judges in racing was the underbidder.

He said, “Territories is a sire we're obviously very familiar with and Teresa Mendoza will run in France this weekend. She came well-recommended and is from a good nursery but she recommended herself.”

Condon added, “She's a very nice type. She has a bit of substance to her and has a lovely attitude. You'd take great heart from the fact that such a good judge like Kevin Prendergast was the underbidder.”

Progeny of Catholic Boy in Europe are just about as rare as hen's teeth and lot 556, a colt by the dual American Grade I winner who stands for $20,000 at Claiborne Farm, was knocked down for €65,000 to top breeze-up consignors Mick and Sarah Murphy of Longways Stables.

Gerry Hogan signed for the colt, who was consigned by Arglo House Stud, and he boasted one of the more interesting pedigrees on day one at the Sportsman's.

Given his page, one would wonder if the colt, out of maiden mare by Muhaarar (GB) and from the family of multiple black-type performers in America, could rock up at the Goffs Dubai Breeze-Up Sale next March. Watch this space.