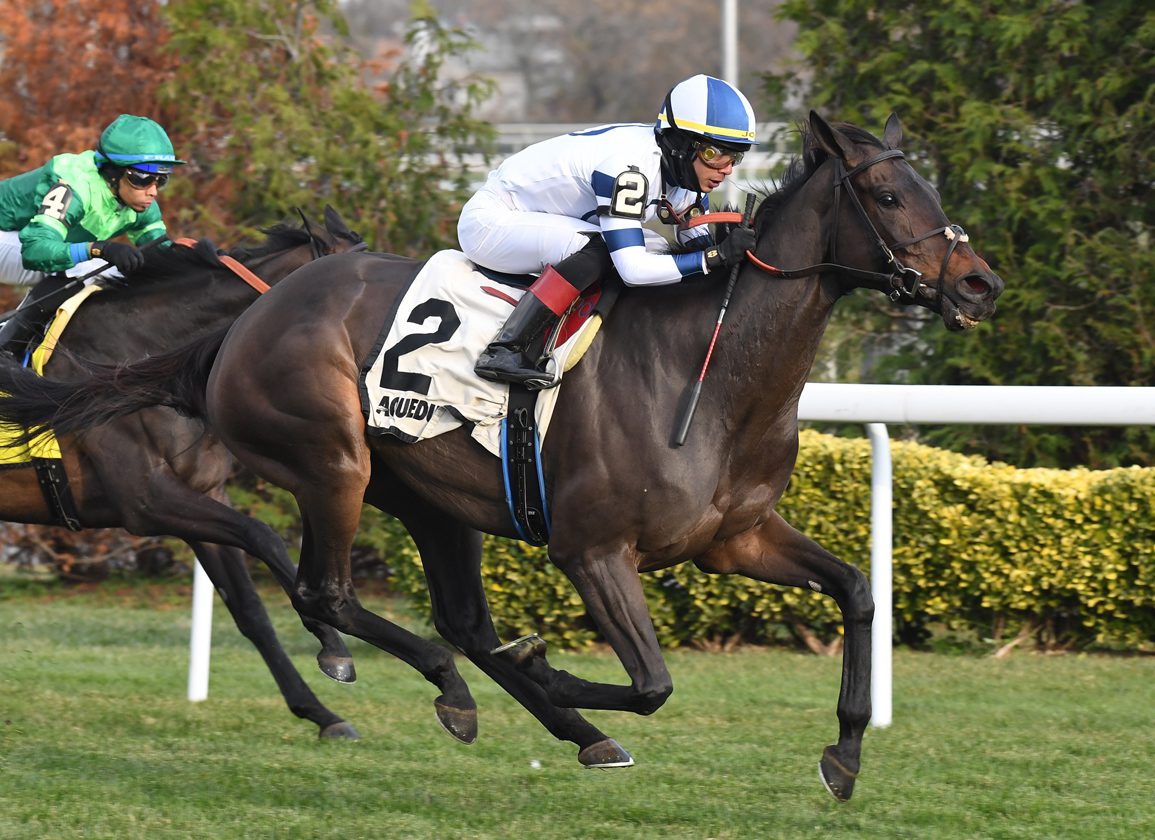 Fresh off a breakthrough victory at the graded level and subsequent $600,000 purchase by Town & Country Farms at the recently concluded Keeneland November Sale, Temple City Terror (Temple City) gave those that backed her into 65 cents on the dollar scarcely a nervous moment as she ran out a hands-and-heels winner of Friday's GIII Long Island S. at Aqeuduct.

Content to take up her customary position at the back of the field, the 6-year-old switched off nicely for Jose Ortiz as a somewhat hard-to-handle Big Time Lady (Big Brown) took them along at an even clip. Last, but always within easy striking distance down the backstretch, Temple City Terror was given her cue with about three furlongs to go, aided by a wayward Big Time Lady, who bothered Capital Structure (GB) (Lope de Vega {Ire}) badly and cost that one any chance. Rocky Sky (Ire) (Rock of Gibraltar {Ire}) inherited the lead and kicked into a clear lead in upper stretch, but possessed of one of the strongest finishing kicks when she is on song, Temple City Terror gathered up Rocky Sky and pulled away under minimal encouragement.

Reasonably lightly raced for a horse soon to be seven, Temple City Terror successfully defended her title in Churchill's Keertana S. May 28, but she caught an unsuitably soft Delaware turf course and could not get through the ground when seventh as the choice in the GIII R. G. Dick Memorial S. July 9. The dark bay completed the exacta behind future GI Longines Breeders' Cup Turf third War Like Goddess (English Channel) in Saratoga's GII Glens Falls S. Aug. 6 and was a pace-compromised fourth in the GII Flower Bowl S. Sept. 3 ahead of her facile success in the GIII Rood & Riddle Dowager S. in what became her final appearance for Pocket Aces Racing and Somewhere Stable Kentucky and trainer Brendan Walsh.

And it appears there is more to come.

“As long as she continues to tell us that she wants to keep doing this, that's what we are going to let her do,” Shannon Potter, CEO of Town and Country, told the TDN while on his way out of Aqueduct Friday. “She's very sound and Brendan's team has done an awesome job with her. She was great today and there's no reason not go go on.”

Added Walsh: “She ran great and we were delighted with her. You couldn't ask for much more than that. These guys, to be fair, they came to me and asked if they should keep going on and I said, 'Absolutely.' I think she's only just gotten good now.”

Town and Country has previously bought successfully at breeding stock sales, with an eye on keeping those purchases in training. Stopchargingmaria (Tale of the Cat_ won the 2014 GI CCA Oaks and GI Alabama S. for Repole Stable and was led out unsold of that year's Fasig-Tipton November Sale on a bid of $3.15 million. Town and Country took over ownership in 2015 and the filly rewarded them with a victory in that year's GI Breeders' Cup Distaff at Keeneland. Stopchargingmaria was subsequently sold on for $2.8 million at FTKNOV in 2016.

Temple City Terror is the latest of 13 graded winners for her sire, the only active son of Dynaformer in Kentucky, and is one of four winners from as many to race from her dam, whose 5-year-old daughter R Calli Kim (Revolutionary) was trained by Walsh to a third-place effort in an 11-furlong allowance over the Belmont turf when last seen July 3. She is also the dam of the 4-year-old maiden-winning colt Silent Steve (Dominus).