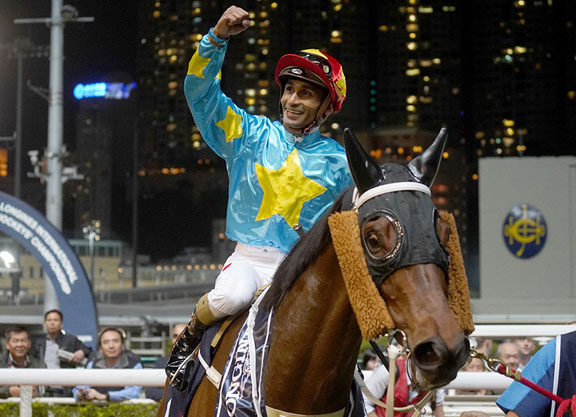 HONG KONG — Wednesday's Longines International Jockeys' Championship at picturesque Happy Valley Racecourse on Hong Kong Island had those in attendance and watching from around the world thinking they were taking in a match between Federer and Nadal, as the locally based Karis Teetan and Ryan Moore, a three-time previous winner of the series, took turns leap-frogging one another in the four-race event.

When the dust had settled, Teetan registered 20 points, just good enough to defeat Moore (18) to take home first prize-money of HK$500,000. With victories in the third and final legs, respectively, Ireland's Colin Keane and Vincent Ho, finished a joint-third on 12 points, with the homegrown Ho earning third-place money in the tiebreaker.

Teetan was a short-priced favourite to win the IJC as early as Monday when mounts were assigned and, indeed, the Mauritian was on G Unit (Aus) (Danerich {Aus}) the 13-5 chalk in the first leg, but Moore rode a tactically perfect race aboard Flying Genius (Aus) (All Too Hard {Aus}) and scored as the 4-1 second choice (video), with G Unit settling for third.

Teetan struck right back in the second leg, settling Dream Warriors (Aus) (Smart Missile {Aus}) slightly better than midfield and then lifting him across the line ahead of the Joao Moreira-ridden Murray's Partners (NZ) (Towkay {Aus}) (video). Moore was out of the placings on favoured Righteous Mate (NZ) (Savabeel {Aus}).

Trailing 16 points to 12 entering the third leg, Moore nearly landed a telling blow, making the majority of the running atop Magnificent (Ire) (Zebedee {GB}) before being caught on the line by Keane, runner-up in the 2018 IJC, who stormed from last aboard Flying Quest (NZ) (Alamosa {NZ}) at odds of 15-2 (video).

Moore's second-place effort catapulted him back into a two-point advantage entering the IJC's fourth leg, in which Teetan seemed to hold all the aces on 3-2 choice High Rev (Aus) (Fastnet Rock {Aus}). Well out of his ground early, the bay came with a late run to snag third to put Teetan over the top. Vincent Ho was aboard the victorious Glorious Dragon (Ire) (Teofilo {Ire}), who was off as the 16-5 second pick (video), while Moore was well down the field.

“I still can't believe I've won this challenge,” said an elated Teetan. “I knew I had some decent rides, but you still need the horses to perform. I was telling my fiancee (Xaviere Cottereau) that I was really feeling the pressure. It's just not a normal day up against the world's best jockeys. I really wanted to do well and I'm glad everything went well.”

Teetan, who currently trails only Moreira and 2017 IJC hero Zac Purton in the Hong Kong jockeys' premiership, was also third in this year's World All-Star Jockeys Series in Sapporo, Japan.

For a time, there was at least some doubt as to whether the IJC would be held at Happy Valley, where two meetings have been lost to the social unrest in Hong Kong this season. There were no such issues Wednesday evening, though green fencing now surrounds the track from roughly the 1000-metre start to the end of the grandstand furthest from the winning post at approximately the 1650-metre start.

In years past, the opening ceremony for the IJC between races three and four had been punctuated by a small launch of fireworks, but that was conspicuously missing this time, as a computer-generated image of fireworks over Hong Kong Harbour was used in its stead.