Home » Archive » Top News » Tears of Joy in the Ashland

Tears of Joy in the Ashland 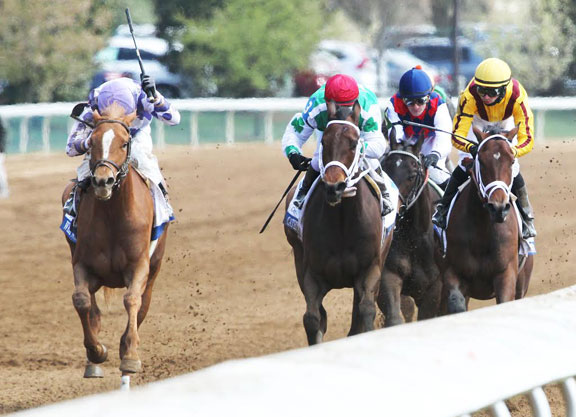 It wasn’t the $136.80 that Dun-Cee returned in beating Furl Sail in the Ashland S. nearly a half-century ago, but in a race that seemed on paper certain to be dominated by a trio of TDN Rising Stars, it was Weep No More who rallied furiously in the final 2 1/2 furlongs to register a 30-1 upset that felt much bigger.

A $90,000 Keeneland September yearling turned $120,000 OBS March juvenile, Weep No More was lightly regarded and largely ran to debut odds of 45-1 when struggling home a slow-starting and distant eighth of 12 behind Smart Shopping (Smart Strike) in the Churchill slop Nov. 28. Stabled over the winter at Payson Park, she made a successful first voyage to Florida’s Suncoast to break her maiden going an extended mile over a rain-affected strip Jan. 22 and got a fair bit of revenge in her next and most recent start, defeating Smart Shopping into third in the Feb. 13 Suncoast S. Any thoughts of an interim appearance were squashed by the subsequent quarantine at Payson and Weep No More was the shorter priced of the two outsiders in the high-quality field of five.

The Ashbrook Farm colorbearer fell out of the gate and was immediate well out the back of the pack as Cathryn Sophia led for the opening strides, but was displaced soon after by the comebacking GII Golden Rod S. winner Carina Mia (Malibu Moon). Rachel’s Valentina, last spotted chasing home fellow Rising Star Songbird (Medaglia d’Oro) in the GI Breeders’ Cup Juvenile Fillies over the track and distance Oct. 31, advanced to apply token pressure through an quarter-mile in :24.18 and Cathryn Sophia found her comfort zone just in behind those from third. The pace quickened noticeably through the middle part of the race, with internal sectionals of a very testing :23.06 and :23.78, but positions remained largely unchanged until Javier Castellano pulled out Cathryn Sophia, who made what appeared to be a winning move outside her two chief rivals. Rachel’s Valentina refused to go away and as they hit the top of the stretch, it seemed that the race would be settled between that duo. But Weep No More, not even in camera range with just two furlongs to race and a short run in to negotiate, literally skimmed the fence, came away from the inside with a sixteenth of a mile and worked over the top of the favorites for an improbable upset.

“At the top of the lane, to be honest, I didn’t think I would get up,” admitted winning jockey Corey Lanerie. “I was rolling, I had a lot of horse, but with the short stretch, I was hoping to be third. Then about 70 yards from the wire, I was like, ‘C’mon baby–we can get it.’ She kept running and ran a huge race. Thanks to Rusty and them for the opportunity. What a great training job. He gave me all the confidence in the world, just to ride her, let her run her race and see what happens.”

Weep No More is a granddaughter of Flute (Seattle Slew), who carried the Juddmonte Farm silks to victory in the 2001 GI Kentucky Oaks. Crosswinds is the dam of a yearling colt of this year by Blame and foaled a colt by Curlin earlier this winter. Ashbrook Farm is the nom du course of owner Glenn Bromagen, whose Wicked Style (Macho Uno) registered an 11-1 upset in the GI Breeders’ Futurity at Keeneland back in 2007.