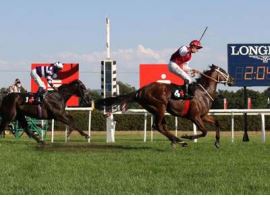 Va Bank made it 12 on the bounce at Baden-Baden | Galoponline.de

Barry Irwin's Team Valor International has succeeded in acquiring a half-interest in reigning Polish Horse of the Year Va Bank (Ire) (Archipenko), who most recently ran his record to a perfect 12-for-12 with a stirring success in the G3 Preis der Sparkassen Finanzgruppe at Baden-Baden Aug. 27. The colt's winning streak is believed to be the longest active streak in the world.

Bred by Airlie Stud, the son of Vinales (Ire) (Dilshaan {GB}) was acquired by Bobby O'Ryan for €4,500 at the 2013 Tattersalls Ireland Sale and was sent to Poland to be trained by Maciej Janikowski for owner Janusz Zienkiewicz. He became an instant sensation in Warsaw, winning each of his three starts at two and went a perfect five-for-five in 2015, including a sweep of the Triple Crown (Polish St Leger video) and a season-ending win in the Wielka Warszawska (video), the nation's most prestigious weight-for-age event. He picked up where he left off this term, with three wins at home before proving equal to the challenge in the 2000-meter test at Baden-Baden last time out (video). He will continue to be trained by Janikowski in Warsaw.

“I have always maintained that a good horse can come from anywhere,” Irwin commented. “And, when a horse is unbeaten, nobody knows where it is likely to level off. This is a serious racehorse, he has a tremendous turn of foot and he has a ton of heart.

He continued, “My wife Kathleen touted me on this one. She follows racing in obscure international regions. We tried and failed to buy him after he had won his last race in Poland, but we were stymied. After he won in Germany, we redoubled our efforts and were able to figure out how to get the deal done.”

Current plans call for Va Bank to defend his title in the Wielka Warszawska Oct. 2 and he will be put away for the winter thereafter. He will resume with a Polish prep in early 2017 for a race in Germany or France, but Irwin is entertaining loftier ideas.

“While my new partner and I will be mindful of giving the colt his best chance to maintain his unbeaten record,” Irwin said, “we likely will experiment with him over more ground to find out if he is a middle distance runner or if he has the stamina to target the Melbourne Cup.”