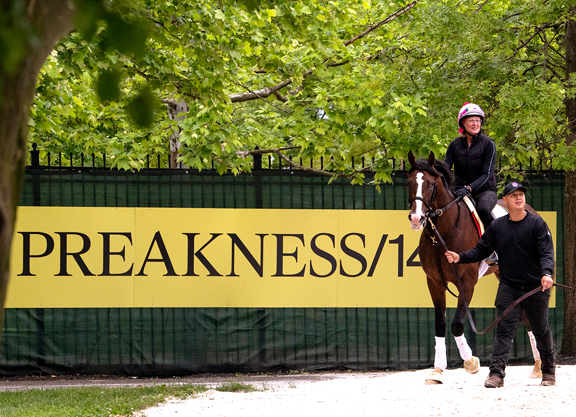 War of Will | MJC Photo

1) WAR OF WILL (c, War Front—Visions of Clarity {Ire}, by Sadler’s Wells)
O-Gary Barber. B-Flaxman Holdings Limited (KY). T-Mark Casse. Sales history: $175,000 RNA Ylg ’17 KEESEP; €250,000 2yo ’18 ARQMAY. Lifetime Record: MGSW, 9-3-1-1, $501,569.
Last Start: 7th, GI Kentucky Derby, May 4
Equineline PPs. Caulfield on War of Will.
War of Will’s trip woes on the far turn of the GI Kentucky Derby have been well chronicled, but this €250,000 ARQMAY War Front colt will be a resilient enough of an equine athlete to bounce back strongly after the near-clipping incident that stopped his momentum cold while making a solid bid for the lead. Jockey Tyler Gaffalione had to throttle back the torqued-up War of Will’s tactical speed for much of the Derby run, but post one should be no problem again in the Preakness because War of Will has clearly demonstrated through his nine-race career arc that he can consistently break sharply and assert himself at the fore of large fields. His stalking trip in the Derby underscored that he can withstand a covered-up trip under pressure, and his visually impressive stakes wins earlier in the season are evidence that War of Will relishes the pursuit of prey and is capable of unleashing bold bids when most of the competition has wilted.

2) SIGNALMAN (c, General Quarters-Trip South, by Trippi)
O-Tommie M. Lewis, Steve Crabtree, Dean Demaree, David Bernsen, Jim Chambers & Magdalena Racing. B-Monticule (KY). T-Kenneth G McPeek. Sales history: $32,000 Ylg ’17 FTKOCT. Lifetime Record: GSW & MGISP, 7-2-2-2, $552,990.
Last Start: 3rd, GII Blue Grass S., KEE, Apr. 6
Equineline PPs.
Signalman’s 30-1 morning line odds shine like a beacon of value in the Preakness because they vastly overlay his true chances of winning. This $32,000 FTKOCT General Quarters colt failed to make the points cutoff to qualify for the Derby, but he had legitimate excuses for both his 2019 defeats: He lost a shoe and reportedly “didn’t scope perfectly clean” after running seventh in the GII Fountain of Youth S., then in the GII Blue Grass S. he was trying hard but couldn’t make up ground when third behind a frontrunning winner on a speed-favoring surface. As a 2-year-old, Signalman both kept good company (third in the GI Breeders’ Cup Juvenile at 67-1) and uncorked a visually impressive stakes win (pinned on the rail in the mud in the 14-horse GII Kentucky Jockey Club S.). At the post position draw, trainer Ken McPeek said a mid-pack stalking trip was the likely Preakness strategy for his colt.

3) IMPROBABLE (c, City Zip—Rare Event, by A.P. Indy)
‘TDN Rising Star’. O-WinStar Farm LLC, China Horse Club International Ltd. & Starlight Racing. B-St. George Farm LLC &
G. Watts Humphrey Jr. (KY). T-Bob Baffert. Sales history: $110,000 Wlg ’16 KEENOV; $200,000 Ylg ’17 KEESEP.
Lifetime Record: GISW, 6-3-2-0, $769,520.
Last Start: 4th, GI Kentucky Derby, May 4
Equineline PPs. Caulfield on Improbable.
‘TDN Rising Star’ Improbable will carry Preakness morning-line favoritism on his sturdy chestnut shoulders as trainer Bob Baffert aims for his eighth win in the middle jewel of the Triple Crown. But even Baffert admitted earlier this week that he’s never sent a starter into the Preakness off of three straight defeats, although this athletic, long-striding chestnut does have a theoretical advantage as the lone Grade I victor in the field. Improbable never truly looked comfortable in his Derby fourth (via disqualification), both footing-wise and position-wise. But he has been improving subtly in terms of focus, and a clean trip in the Preakness puts him in the hunt to win it. “He just needs to get away [from the gate] better,” Baffert said. “For a horse with as much natural speed as he has, he has trouble getting going. For some reason, the first hundred yards, he scrambles a little bit.”

4) ALWAYSMINING (g, Stay Thirsty–What Will Be, by Anees)
O-Runnymede Racing LLC. B-Avla Pitts (MD). T-Kelly Rubley.
Sales history: $32,000 Ylg ’17 KEEJAN; $130,000 Ylg ’17 KEESEP.
Lifetime Record: 12-7-0-1, $386,192.
Last Start: 1st, Federico Tesio S., LRL, Apr. 20
Equineline PPs.
The local hopeful in this year’s Preakness doesn’t have to prove he belongs, having earned a shot to step up to graded stakes competition for the first time after pummeling Laurel-based foes by open lengths in six consecutive races. The running style of this $130,000 KEESEP Stay Thirsty gelding suggests he’ll be forwardly placed per usual, but Alwaysmining has yet to endure several stout waves of competition that are likely to engage the pacemakers late in the Preakness. This gelding will attempt to become the first horse since Deputed Testamony in 1983 to pull off the difficult Federico Tesio S.-Preakness double. But since the Tesio has been moved from Pimlico to Laurel, it no longer carries the win-over-the-track advantage it once did.

5) WIN WIN WIN (c, Hat Trick {Jpn}-Miss Smarty Pants, by Smarty Jones)
O-Live Oak Plantation. B-Live Oak Stud (FL). T-Michael Trombetta. Lifetime Record: SW & MGSP, 7-3-2-1, $367,300.
Last Start: 9th, GI Kentucky Derby, May 4
Equineline PPs.
Win Win Win is the horse on this year’s Triple Crown trail who always seems one race away from blossoming fully. Will the Preakness be his opportunity at juicy 15-1 odds, or is it time to consider some class relief? This Hat Trick-sired homebred so far this season has racked up a seven-furlong track-record stakes win at Tampa, a five-wide third in the GII Tampa Bay Derby, and an against-the-grain second when closing into a potent speed bias in the Blue Grass S. Win Win Win was parked third-last for most of his Derby journey and only launched a mild, belated bid between the quarter and eighth poles. He reportedly didn’t handle the Churchill slop, and will be newly equipped with blinkers while trying to overcome the outermost 13 post.

6) BOURBON WAR (c, Tapit–My Conquestadory, by Artie Schiller)
O-Bourbon Lane Stable & Lake Star Stable. B-Conquest Stables (KY). T-Mark Hennig. Sales History: $410,000 Wlg ’16 KEENOV; $525,000 Ylg ’17 KEESEP. Lifetime Record: GSP, 4-2-1-0, $155,100. Last Start: 4th, GI Florida Derby, GP, Mar. 2
Equineline PPs.
Bourbon War’s last two stakes attempts stamp him as a pace-dependent closer. This $525,000 KEESEP Tapit colt was barreling down the Gulfstream homestretch behind a too-fast meltdown in the GII Fountain of Youth S., and although he was second in that attempt, Bourbon War did surge past the winner a jump after the wire. He never truly uncoiled when fourth behind the moderate tempo of the GI Florida Derby, although the class factor in that race is evident because the first and third finishers came back to cross the wire first and third in the Kentucky Derby. Blinkers go on for the Preakness.

7) LAUGHING FOX (c, Union Rags—Saskawea, by Stormy Atlantic)
O-Alex & JoAnn Lieblong. B-Chester & Anne Prince (KY). T-Steve Asmussen. Sales history: $120,000 yrl ’17 KEESEP; $375,000 2yo ’18 OBSMAR. Lifetime Record: SW, 7-3-0-0, $338,518.
Last Start: 1st, Oaklawn Park Invitational, May 4
Equineline PPs.
Laughing Fox has built an intriguing enough progression of races to consider him as a longshot Preakness inclusion. This $375,000 OBSMAR Union Rags chestnut broke his maiden and won an allowance (both around two turns) at Oaklawn before finishing seventh, then fourth, in stakes behind the ultra- impressive Omaha Beach (War Front). He rebounded with a nine-furlong score in the new closing-weekend stakes feature for sophomores at Oaklawn, and he enters the Preakness for a trainer who has won this race twice and ran third (beaten less than a length) at 26-1 odds last year.

9) OWENDALE (c, Into Mischief—Aspen Light, by Bernardini)
O-Rupp Racing. B-Stonestreet Thoroughbred Holdings LLC (KY).
T-Brad Cox. Sales history: $200,000 Yrl ’17 KEESEP.
Lifetime Record: GSW, $187,225.
Last Start: 1st, GIII Lexington S., KEE, Apr. 13.
Equineline PPs.
A big, looping run off the far turn of the GIII Lexington S. earned this $200,000 KEESEP Into Mischief colt both his first graded stakes win and a competitive 98 Beyer Speed Figure. But that visually impressive move was aided by a pace cave-in that set the race up perfectly for Owendale, and he will need to step up his game once again if he is to capture the Preakness 13 years after his dam-sire, Bernardini, won it in 2006.

10) WARRIOR’S CHARGE (c, Munnings—Battling Brook, by Broken Vow)
O-Ten Strike Racing & Madaket Stables LLC. B-Al Shaquab Racing (FL). T-Brad Cox. Lifetime Record: 5-2-0-3, $138,110.
Last Start: 1st, Allowance/Optional Claimer, OP, Apr. 12
Equineline PPs.
He’s fast, but can he last? The lead straight from the gate from post three likely belongs to this Munnings colt if he wants it, and considering he’s riding a two-race, frontrunning win streak into a huge step up in class, there’s nothing to lose by trying to slug it out for as long and as hard as he can on the top end. Jockey Javier Castellano, a two-time Preakness winner, gets the call for the first time aboard Warrior’s Charge, whose top-half pedigree decidedly slants toward sprinting.

12) BODEXPRESS (c, Bodemeister—Pied a Terre, by City Zip)
O-Top Racing LLC, Global Thoroughbred & GDS Racing Stable.
B-Martha Jane Mulholland (KY). T-Gustavo Delgado.
Sales history: $45,000 RNA Ylg ’17 KEESEP; $37,000 RNA 2yo ’18 FTMMAY. Lifetime Record: GISP, 6-0-3-0, $208,700.
Last Start: 13th, GI Kentucky Derby, May 4
Equineline PPs.
Maidens trying to force Triple Crown relevance don’t usually equate to a winning strategy, but this Bodemeister colt showed some grit in the Derby by pressing the pace and holding a good close-up position against far more seasoned horses. Although Bodexpress will remain fresh in the minds of bettors for how dramatically he seemed to check out of the action in the far-turn scrum that resulted in the DQ of the race winner (You’ve seen the replay hundreds of times, right?), the reality is that this colt was already backpedaling out of contention before that incident occurred. His sire was second in the 2012 version of this race.

13) EVERFAST (c, Take Charge Indy–Awesome Surprise, by Awesome Again)
O-Calumet Farm. B-Extern Developments (KY). T-Dale Romans. Lifetime Record: GSP, 10-1-1-1, $134,805.
Last Start: 5th, GIII Pat Day Mile, CD, May 4
Equineline PPs.
This $47,000 KEEJAN Take Charge Indy colt has his work cut out for him based on what we see on paper. He broke his maiden at first asking last August at Ellis Park and has lost nine straight races since. His career highlight was a 128-1 second in the fall-apart GII Holy Bull S. at Gulfstream, but he’s been beaten double-digit lengths in three stakes since then. He does have a solid body of two-turn racing under his belt, and owner Calumet Farm does have a reputation for sending out solidly-built stayers who don’t shy away from racing. But demand a huge price before bankrolling this colt, even as insurance in exotics.