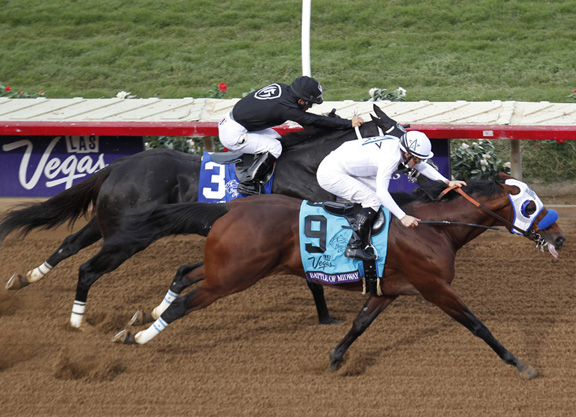 Battle of Midway (Smart Strike) outbattled a game Sharp Azteca (Freud) down the stretch to eke out a narrow victory in the GI Breeders' Cup Dirt Mile Friday at Del Mar. Let go at a generous 14-1, WinStar Farm and Don Alberto Stable's 'TDN Rising Star' was left no choice but to sit a trip three and four wide for the opening five-eighths of a mile, advanced entering the lane. He engaged pacesetting Sharp Azteca in upper stretch and outfought that one in a stride-for-stride battle to the wire. Awesome Slew (Awesome Again) tracked inside and ran on late for third, just outfinishing Practical Joke (Into Mischief).

“I talked to Flavien [Prat] and we agreed there was a lot of speed in the race,” said trainer Jerry Hollendorfer, who was winning his third Breeders' Cup race and second Dirt Mile, said. “At the break he was able to follow John Sadler's horse [Accelerate] and got a good position. This horse has always been a fighter and he showed that today. He showed a lot of courage in winning this race.”

“I let him break and find position and was wide early,” Prat said of his winning trip. “I thought there would be more pace. Then down the backside he relaxed well and gave me a really good kick. He was training really well in the morning.”

Favored Mor Spirit (Eskendereya), making his first start since a towering success over Sharp Azteca in the GI Met Mile in June, had run his race by the time they'd reached the quarter pole and finished well back.

“I was afraid that with Mor Spirit going in that I couldn't get enough into him,” admitted trainer Bob Baffert, who also saddled Dirt Mile 10th-place finisher Cupid (Tapit). “He just got tired. I was disappointed in Cupid. Maybe it was too short for him. He chased a little bit. If they don't show up, they don't show up. I'm happy for Jerry Hollendorfer. I'm a big fan of his, so I'm happy for him.”

Battle of Midway graduated on debut at Santa Anita Jan. 21 for Rick Porter's Fox Hill Farm and was third in the Feb. 12 GII San Vicente S. before winning a Mar. 9 optional claimer in Arcadia. In his final outing for Porter, the bay colt was second, beaten a half-length by Gormley (Malibu Moon), in the Apr. 8 GI Santa Anita Derby. Making his first start for WinStar and Don Alberto at Churchill on the first Saturday in May, Battle of Midway came home third behind Always Dreaming (Bodemeister) in the GI Kentucky Derby.

Battle of Midway won the June 24 GIII Affirmed S. and was a troubled sixth in the July 30 GI Haskell Invitational. In his only previous start at Del Mar, the colt romped home a 6 1/4-length winner of the Aug. 26 Shared Belief S. He was coming off a runner-up effort in the Sept. 24 GIII Oklahoma Derby.

Hollendorfer said, “Our horse finally found himself here at Del Mar in the Shared Belief Mile and ran a huge race, winning by six and running a big number. So we felt all along that we could run in the Breeders' Cup Mile with him liking the racetrack and him looking like he could be a pretty good miler. We used the Oklahoma Derby as a prep for this race, and we got a little bit unlucky in the first turn. He got bounced around, but he still ran a very game race and never gave up. So we never gave up on him either.”

Explaining how the deal to purchase the Derby contender this past spring came about, WinStar's Elliott Walden said, “[Don Alberto advisor] Fernando Diaz was the one who put it together. Fernando and I have done a few deals together with [Don Alberto principal] Carlos Heller. Fernando called me and said that Jerry Hollendorfer really believed in this horse, and Mr. Porter was selling him, and Jerry wanted to keep him. He felt like he was a really, really good horse. So I called Jerry, and Jerry, we haven't done a lot of business together, but it's been a great experience, and we'll do some more.”

Heller, whose family will be represented Saturday by GI F/M Sprint favorite Unique Bella (Tapit), added, “This has been a dream come true. I love this sport, and I'm absolutely delighted that I have this beautiful partnership, and we're excited about tomorrow also. Such a beautiful race.”

Battle of Midway, a $410,000 Fasig-Tipton Saratoga, was giving his late sire his fourth Breeders' Cup winner and second Dirt Mile success, adding to that of Furthest Land over the Santa Anita all-weather back in 2009.

Mike Repole and Eclipse Thoroughbred Partners teamed up to buy Battle of Midway's yearling half-brother by Medaglia d'Oro for $900,000 at this year's Fasig-Tipton Saratoga sale from breeders Eric and Pavla Nygaard's Thor-Bred Stables. The Nygaards purchased Rigoletta for $35,000 at the 2010 OBS April sale and the filly won that year's GI Oak Leaf S. in their colors. The mare produced a colt by Empire Maker this year and was bred back to Tapit.