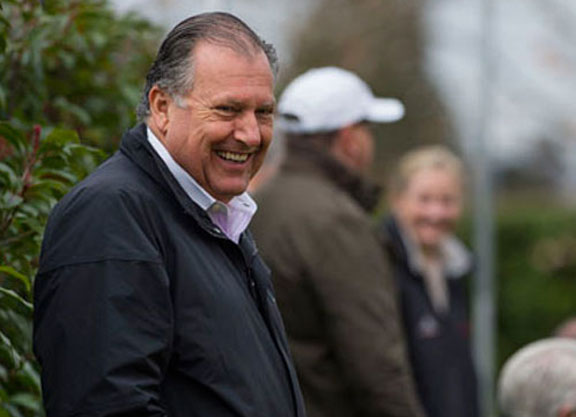 While 2021 marks the end of an era for Australia's Arrowfield Stud, with the last yearlings by its breed-shaping sire Redoute's Choice (Aus) going through the ring, it has likewise signaled the start of another, with young shuttler Shalaa (Ire) getting off to a bright start with his first Southern Hemisphere-bred crop headed by the Magic Millions 2YO Classic winner Shaquero (Aus). Arrowfield will offer yearlings by both at the upcoming Inglis Australian Easter Yearling Sale on Apr. 6 and 7, and we caught up with Arrowfield's John Messara to discuss Shalaa, the consignment and some broader industry trends.

TDN: Shalaa has got off to an excellent start in his first season with runners. Can you tell us why you think his progeny are suited to Australia?

JM: Yes, Shalaa has got off to a good start here. He was a champion 2-year-old racehorse in Europe, he's good-looking and from a sireline that was beginning to work in Australia. I must say, his progeny all seem endowed with his quality and athletic demeanour. From the start, trainer feedback has been good.

TDN: After Shalaa's first year, what kind of support did he receive in his subsequent three books, and what types of mares do you think are best suited to him? How have his yearlings been received this year off the back of his early results?

JM: We have been serving approximately 150 mares each year with him and demand at the sales for his progeny has remained strong. It is a bit early to say what kind of mares will work for him, however, he seems to tidy up the progeny of most mares.

TDN: Arrowfield has 49 to sell at Easter-tell us a bit about the draft as a whole.

JM: We have what I believe is a well-balanced, high-standard draft of yearlings for Easter, including a number of yearlings by Japanese stallions and a group of exquisite yearlings by our champion sire, Snitzel. The response from those who have inspected the draft on the farm over the last 10 days has been positive, and there is a strong recognition of our record as a source of top performers and prospective stallions.

TDN: When most other sales markets have been happy to consolidate during the global pandemic, the Australian yearling market has been vibrant this year, setting records at the major sales thus far. Why do you think Australians have been so keen to invest in Thoroughbreds?

JM: Australia has seen a buoyant market in most asset classes during the COVID-19 crisis: real estate, the stock market, boats, Thoroughbreds etc. I think it's a combination of factors which has caused this. The massive injection of funds into the economy by the Australian Government and our very low interest rates have been contributors. Our natural isolation and effective response to the virus compared to most other countries has made us a bit of a haven.

Then there has been the psychological effect of all the scientific and government warnings about the drastic potential of COVID, which led to people believing they were staring death in the face on a major scale when in fact we have been able to control the disease very well. I think this has caused people to reassess their lives and begin to “live for the moment,” unleashing significant discretionary expenditure on horses, boats, cars–if that was their hobby–or on upgrading their homes, etc.

TDN: Australia's prizemoney has also done well during the pandemic; minimum prizemoney levels were quickly restored and Racing NSW recently announced a $20-million prizemoney injection. Why has Australian prizemoney been able to flourish and grow during this time?

JM: There are two reasons: racing was about the only sport or entertainment that continued relatively unabated during the pandemic and so it enjoyed a big rise in wagering turnover; that has underpinned the sport's revenue base. In NSW, [we underwent] negotiations with the state government six or seven years ago that led us to be placed on the same footing as the Victorian racing industry as far as state wagering taxes were concerned. This tax alleviation was conceded to Racing NSW and was to be introduced on a five-year graduated basis. I believe we are now enjoying the full benefit of this.

The racing industry in Australia is most fortunate to be supported by the best fundamentals for racehorse owners in all the open racing economies. Australian racing is working its way back into being a mainstream sport here again.

TDN: This year's yearling sales mark the end of an era with the last crop of Redoute's Choice going through the ring. Can you describe how important he has been to Arrowfield and to the Australian industry?

JM: Redoute's Choice's multiple champion sire titles certainly underpinned the Arrowfield operations over a number of years and the massive revenue generated by his progeny by way of yearling sales and prizemoney benefitted the industry as a whole.

TDN: Likewise, Danehill and his descendants, with Redoute's Choice at the forefront, have shaped the modern Australian breed.

JM: Yes, it's true that Danehill and his most influential son have shaped the breed in Australia. Danehill, Redoute's Choice and their sons have, in fact, won 20 of the last 25 Australian champion sire titles–quite an achievement. There was more evidence of their dominance just last weekend when each of the 15 starters in the G1 Golden Slipper had at least one line of Danehill blood in their pedigree.