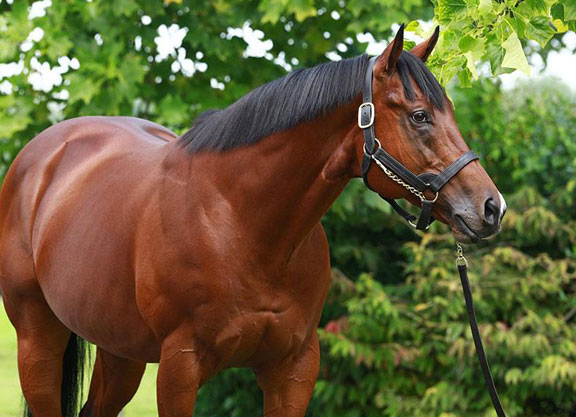 AC: Siyouni has become one of Europe's greatest stallions. Tell us about his rise?

GR: Siyouni is an interesting horse. He was a champion 2-year old, son of Pivotal. People found that he mated very well with their mares and as a result of that we always had full books, and I think that's important for a stallion to start out. He was syndicated also which helped a lot. So I think the combination of his [racetrack] performances, early performances of his progeny, pedigree, and syndication really helped him out.

AC: His progeny are having a great year on the track this year?

He's gone up in price now and we're getting some very, very good mares. Really, some Classic-winning mares all sorts of very good stock from Europe. It's an open road for him, really.

AC: And what's impressed you about Laurens the most?

GR: Laurens, she's an impressive filly not only by her size, she's a very scopy, massive filly with a great action. She takes the lead, she keeps on at it. She is quite extraordinary in that sense. I understand they're going to run her in the [G1] Yorkshire Oaks and then onto the [G1 Prix de l'] Arc [de Triomphe]. For a daughter of Siyouni it's quite remarkable and we look forward to that.

AC: You mentioned that he's jumped up in price and I'm sure that means he's had a very busy breeding season just gone, can you tell us about how the season went for him, did you get any particularly exciting mares?

GR: Well, this past season in 2018 is very exciting, we brought his price up to €75,000. We didn't have the space for all the mares that wanted to be there, so we had some very good mares coming from all sides, most notably The Fugue (GB) (Dansili {GB}). We had mares from all over Europe; from Germany, Ireland, England, France. At that price, I think we're going to see some amazing results.

AC: We've spoken a little about Siyouni, but of course he's not the only stallion that stands at Aga Khan Studs. How are the other boys this year?

GR: I think we're very proud of the Aga Khan Studs to have a really nice roster of stallions. We have Siyouni obviously, we have Sea the Stars (Ire) (Cape Cross {Ire}) in Ireland who's also a fantastic sire, really. You can't fault him. He's an incredible sire. And the new additions, we brought in Harzand (Ire) (Sea The Stars {Ire}) to Ireland two years ago, dual-Derby winner. We brought in Zarak (Fr) (Dubawi {Ire} last year, a very nice horse. And we brought Dariyan (Fr) the year before, a son of Shamardal, very good-looking horse, producing lovely, lovely horses.

We try to bring stallions that are good prospects and really at the end of the day they are turning out to be good stallions so it's great. People should be aware of that. The others are coming up the ranks and we believe in them as strongly as we believed in Siyouni at the beginning.