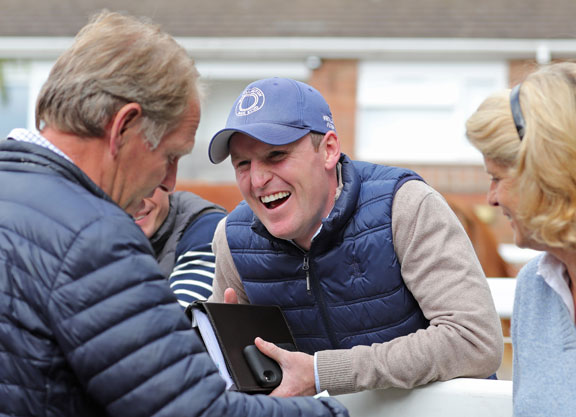 With the yearling sales now in full swing, TDN quizzes industry figures on past purchases, life during lockdown and gets their perspective on the sales for the next few weeks. Billy Jackson-Stops answers our questions today.

TDN: What was your best yearling purchase over the last few years? And your favourite?

BJS: I set up JS Bloodstock Consultancy in the summer of 2018 and bought my first yearlings that year. Those 2018 yearling purchases resulted in my best purchase to date which was Shadn (Ire) (No Nay Never {USA}), who won the Listed Rosebowl S. and G2 Criterium De Maisons Laffitte last year before heading to the States to take her place in the GI Breeders' Cup Juvenile Fillies Turf. She and a little horse called Soldierpoy (GB) (Sepoy {Aus}) would be my favourites. Shadn was very sweet natured and was a very determined horse, whereas Soldierpoy, who Tom Clover and I bought for £7,000 last year, was completely the opposite. He was shockingly behaved each time I saw him at the sales, but he was structurally very neat and came from a good breeder. The temperament never left him, he was always a handful in training but he was very quick and ended up finishing third in the Super Sprint, having won a race, and was subsequently sold at the August sale for £67,000, a great touch for the owners.

TDN: Is there any positive you have taken from how the sales have been conducted this year?

BJS: The overall positive is that the sales are on and all credit goes to the sales houses who have worked tirelessly to make that happen. It's great to have seen the separate sales houses coming together and successfully getting horses sold. They deserve a huge amount of praise for being able to hold the sales in what has been an unpredictable and difficult year.

TDN: How has your business adapted?

BJS: We've focused on a bigger online presence. Without being able to travel and meet prospective clients personally, it's been important for those people to have been able to see our work and what we do through our website and social media pages. We also upped our communications by making use of The Racing Manager app which has been a huge help in keeping clients up to date, whether it's videos of horses training, entries and declarations or voice notes directly from the jockeys after the horses have raced, we've tried to keep everyone as informed as possible.

TDN: In general what are your thoughts on the 2020 yearling catalogues? And what progeny of new stallions are you most looking forward to?

BJS: The catalogues are very much in line with previous years in terms of quality and quantity, other than the Tattersalls Ascot Sale which has almost doubled in size with consignors looking to get a five week jump on what would have been their other option in Tattersalls Book 3. Some consignors have taken the view they might do better selling earlier in a stand-alone sale rather than at the end of a long two weeks of Book 1, 2 and 3.

Having done the first yearling sale at Goffs UK already I was impressed with the progeny of the two Scat Daddy horses in El Kabeir and Caravaggio. But having seen a lot of the progeny of Profitable (Ire) at Goffs UK I'm most looking forward to seeing his stock hit the track, they looked a good group and I'm sure we'll see a lot of those at Royal Ascot next year.

TDN: Did you develop any new interests or hobbies during lockdown?

BJS: I felt fit for probably the first time since leaving school. There was quite a lot of running and eating healthy throughout lockdown, all of which has gone out of the window since sales have started again. I did a lot of reading as well; I really enjoy biographies and autobiographies, the best of which were Andre Agassi's, Peter Moody's and that of a tough ex-army man called Mick Dawson who rowed the Pacific from Japan to San Francisco on his second attempt at it having sunk his boat in the middle of the pacific on his first attempt.

TDN: Who's the most interesting person you know?

BJS: My Dad is without question the most interesting person I know. He's full of stories from throughout his life from successfully firing fireworks directly through the window of his headmaster's office while he was at school, to getting his pilot's licence and racing cars all around Europe; he seems to have packed a lot into his life. He worked full time in property and still somehow, despite the work, family and machines, found the time to read a lot and therefore seems to know a huge amount about random aspects of life.

TDN: What's one mistake (if any) you made in your career, and what did you learn from it?

BJS: I never spent much time with an agent before setting up myself and therefore didn't know the intricacies of running a bloodstock consultancy, so my entire career to date has been based on trial and error, a lot of error! So in hindsight I wish I'd spent a few years working with an established agent before going on my own.