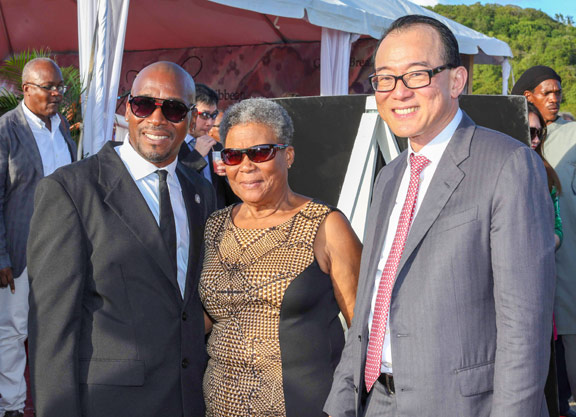 China Horse Club Chairman and Founder Teo Ah Khing, an architect by trade, is spearheading a $2.6 billion project on the island of St. Lucia called the Pearl of the Caribbean. The centerpiece of this massive project–which will include hotels, cruise ship ports, restaurants and much more–is a racetrack known as the Royal St. Lucia Turf Club that is scheduled to open its doors Dec. 13 with a racecard highlighted by the inaugural Pitons Cup. The $150,000 race, which is the richest in the Caribbean, is modeled after the GI Pegasus World Cup with 12 slots available for purchase for $20,000 a piece. Participants will also be given an unraced 3-year-old to compete in the Helen of the West race on the opening day undercard. Taylor Made Farm and the trio of Todd Pletcher, Sol Kumin and Brad Weisbord have already been announced as slotholders for the initial Pitons Cup. The TDN's Christie DeBernardis sat down with Teo at the Keeneland September Sale to discuss the details of St. Lucia's official introduction to Thoroughbred racing.

CD: What made you choose St. Lucia?

TAK: St. Lucia came strongly recommended by our dear friend Winston [Trim]. (Click here and here for more information on Trim and his involvement in the project). I would say, personally, he would be one large single factor that brought me to the island way before I met the current administration and Prime Minister. His enthusiasm really caught me. We had been looking for two years for expansion. We started in Australia and New Zealand. We tried South Africa. It was the same year we met Winston and brought him to China. He was such a character with a likeable personality. Of course, St. Lucia was a very interesting strategy point for us. It is not far from the eastern time zone. It is a small country with very intelligent people. It is close to Florida and we thought that it could offer a better platform as a transition place between America and China in the movement of horses, people and resources.

CD: What makes it attractive for the members of the China Horse Club?

TAK: It is famous as a holiday spot and for tourism. China Horse Club is not just about racing. We also offer business networking, so we are always looking out to see, in 10 years, where we can host more international partnerships between Asia and America. St. Lucia ticked the boxes.

CD: How long has this project been in development?

TAK: We started in 2016, so this is three years in the making. East Coast time is 12 hours from Asia, so mobilizing our know-how and connecting with the new administration and government was difficult. It also takes time to trust each other. We set aside $100 million and today we are on target. It is an investment in the whole island. It shows sincerity and that we are serious about working with the government to build their industry, starting with horse racing. We are bringing in a U.K. betting house and bringing a lot of interesting friends based on our partnerships in America. Ultimately, even though St. Lucia is a small country, it has potential to be like the Singapore of the Caribbean. Singapore had no natural resources, but through aviation, it built up and became one of the biggest airlines in the world. Why can't St. Lucia be like that? And we haven't even explored the Latin America angle yet, so I think it has huge potential. We find it very attractive geopolitically.

CD: Why did you choose the name Royal St. Lucia Turf Club?

TAK: We have special permission from the Queen [of England] to use that as part of a historical racing establishment and to attract a lot of interesting investors to the island. It gives it a brand. It is new. It has never been done. The December racing is going to be a very serious undertaking. We are putting more than $30 million USD between racing and building.

CD: What has the response been from possible participants?

TAK: The response that we have had since we launched it is very positive. A lot of slots have been taken and interested parties are discussing which horse to bring down and how, etc. All of them are quite interested to see if they can share the glory of holding the first Pitons Cup sculpture trophy. It is historic, and we hope in the long run, St. Lucia will be featured as part of the end-of-the-year calendar for many.

CD: Who has purchased slots so far?

TAK: We have announced two slot-holders so far, but we currently have five locked down. Of course, our racing partner WinStar Farm, one of America's premier racing stables, is one of those. We have a group from Trinidad which will be announced soon and we also have interest from Australia, Europe and Asia.

CD: The Pitons Cup is modeled after the Pegasus, but has a unique addition with a slot-holder receiving an unraced 3-year-old for a race on the undercard. How was that concept derived and what does your team hope to achieve?

TAK: The goal is to bring notable and established horse owners and breeders to own horses in St. Lucia. By offering slot-holders one horse to race on the undercard, it allows that existing owner to be part of the racing on the island, if they stay in on the horse, but the horse will be maintained by the locals, creating employment for St. Lucians. This will result in 12 new owners with American-bred horses in St. Lucia and, hopefully, their participation will encourage others to come and share in a horse in St. Lucia and mark the December race meet on their calendar. The Pitons prize money is nothing compared to the Pegasus, but there is room to grow. Hopefully, next year we might consider doubling the prize money and continue to increase it each year to bring it to prominence.

CD: What will be the local involvement?

TAK: We want to increase local participation by training the local horsemen to be grooms all the way up through trainers and jockeys. We have engaged some of the schools in America to go down and train a few dozen students who are interested. This is an ongoing thing. It is not just a one-off. It is part of our promise to the island to train them and help them explore their potential in the equine industry.

CD: What is the plan for the opening day card?

TAK: There will be five races, plus two local races to allow the local riders to participate. One of the races will be named after my good friend Winston Trim.

CD: What events will be surrounding the racecard?

TAK: The following day the government plans to host an investment seminar to introduce the island and highlight places, like hotels and major tourists areas, which will be reserved for our guests to enjoy. It is a special showcase for the weekend.

CD: Are there any plans yet for the length or frequency of race meets at the new track?

TAK: It is still in its infancy. We just want to make sure the horses are safe and the people enjoy the track. Later on, we will plan how it is going to evolve. Maybe we will morph it into a mini international racing meet, planned into a major program on the U.S. and European calendar.

CD: Will there be a regulatory body of some sort overseeing and implementing the rules for racing in St. Lucia?

TAK: We are exploring where St. Lucia will fit in, whether it is under American rules, IFHA or the Caribbean Racing Association. The Royal St. Lucia Turf Club would like to work with the local racing fraternity to make it into a very serious and strong racing block that will be able to attract and get attention from others.

CD: What is currently ready at the site?

TAK: The dirt track and the starting gate are in. We built 120 stables with groom facilities. Some friends from Ireland came to visit and so far, we must say, the reviews have been great. The grandstand has been planned for, but is not ready yet. For this year, there will be a huge marquee, accommodating up to 400 VIPs. We will also have an area for the public that can handle 5,000-6,000 and another overflow area that can hold 10,000. Hopefully, in two or three years' time, we will build a permanent grandstand and then allow the other facilities to come in to match.

TAK: We have a 40-stall quarantine facility and the whole idea is to allow for horses to come in and out on a quick turnaround and also to use it as an export center. Later on, people will be able to claim horses and can use that facility to export them to the Asian marketplace or elsewhere.

CD: When will the horses purchased by the Royal St. Lucia Turf Club at OBS last year be sent to St. Lucia?

TAK: On Oct. 18, there will be 43 horses coming down. They were being trained by a trainer in Florida and they look good. Twelve of those will be in the undercard race for the Pitons owners.

CD: The racetrack is the centerpiece and current focus of the project, but what else is involved in the Pearl of the Caribbean?

TAK: What struck me during one of my early visits is how beautiful the island is and how it has been endorsed by all the major cruise ship lines. They have chosen St. Lucia as a stopover, despite the fact that geographically they are quite a bit south of the popular spots such as Nassau in the Bahamas and St. Kitts. St. Lucia has a lot of potential in terms of aviation and the cruise ships. It is not spoiled. It is undiscovered. We think there is a pattern that in time to come St. Lucia will be one of the major attractions with activities such as international sports, public education, etc. At the end of the day, St. Lucia's purchasing power will increase based on the jobs they are offered through international organizations coming in. The St. Lucian government understood that the island needed to seriously open up to attract the foreign investors to come in and work with the government and at the same time put equity and big brands into St. Lucia. The government is building up all the major infrastructure like the airport, private jet hangers and cruise piers that can accommodate super yachts. It will take 10-15 years, but we know exactly where to start. The racing and employment is definitely one of the early starters. We have to get that part fixed and then we can talk about tourism. That will help the island become stable and then people can enjoy the peace and tranquility of the island. Our track record shows that we like to do what the island deserves first before we can even think about making any profit and that is exactly what we are doing right now. We are talking about how we can contribute meaningfully. We think it is attainable and in the next five years, we will see a lot of the pieces coming together.