TDN Q&A: Oisin Murphy Rides Hot Streak in to BC 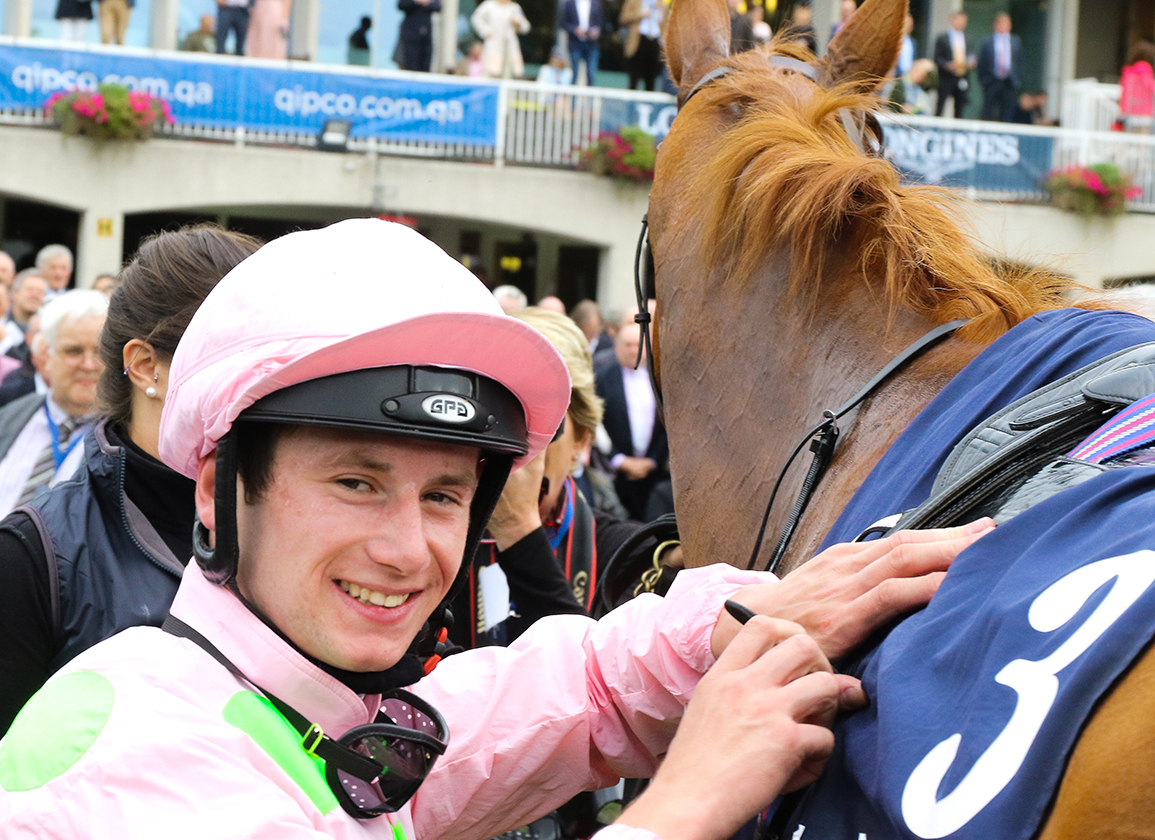 It's not the least bit uncommon for European jockeys to win a Breeders' Cup race, but the names are usually familiar ones like Frankie Dettori and Ryan Moore. But this year it could be that the star among the European jockeys in the Breeders' Cup is a 23 year-old baby-faced jockey from Ireland who you may not even have heard of. His name is Oisin Murphy, and on the other side of the Atlantic, there is no hotter rider.

Murphy was a recent guest on the TDN podcast, brought to you by Taylor Made. Excerpts from that podcast are below.

TDN: We've read that your uncle, Jim Culloty who is a legendary steeplechase trainer and jockey, was your mentor. That he, more so than anybody else, brought you along, and taught you the craft. Could you talk about him, and what he meant for you as a young boy growing up?

OM: I moved in with Jim when I was about 14 years of age, and he was an up and coming jump jockey at the time and would become a top jump trainer. He achieved plenty as a rider. He won a Grand National, Cheltenham Gold Cups. He basically won all the big national hunt races in Ireland and England. As a trainer, he won another Cheltenham Gold Cup, and he had four Cheltenham winners in total. I had plenty to live up to when I started my own riding career. But he pointed me in the right direction. It was his decision to send me to England, to Andrew Balding, to be an apprentice. I owe him a lot. He's been my mentor for, since–well–since day one.

TDN: Being someone from Ireland, and with Ireland having great racing of its own, is that why you became a UK-based jockey? Just because of the whole connection, and your beginnings with the Balding stable?

OM: There are more opportunities in Britain. Really, in Britain, we race every day. We may not race in England, but there's racing in Scotland or Wales, or wherever. There's a variety of tracks. People aren't afraid to travel, also, so as a rider, I had a better chance to get going, compared to Ireland. I'm very grateful to my uncle Jim for making that decision, because had I stayed in Ireland, I may not be in the position I'm in now.

TDN: The 2013 Scottish Gold Cup at Ayr was the first major win of your career. At the time, did you ever think this is as good as it gets? Or, did you imagine that four or five years later, you'd regularly be winning Group 1 races?

OM: I'll be honest–I always thought it was a very difficult game, and I was fully aware that as a jockey, you're only as good as your last race, or your last winner. You have a little bit of grace, in essence, but you have to keep achieving and keep finding the fast horses. I was fully aware of that, from a very young age. I grew up watching my uncle Jim, as a jockey, with my granddad at home, and his races would be criticized. He depended on success to keep things going.

OM: It was my ambition to be part of the Qatar Racing team when I was an apprentice, because of their horses at Andrew Balding's stable. Obviously, it never dawned on me that that would be possible. But I worked hard, and one of my first rides for Qatar was probably Champions Day 2014 and everything went well. Sheikh Fahad and his brothers are very supportive of flat racing in Europe, and actually across the world. He wanted me to do well.

TDN: You actually made your debut in the Breeders' Cup last year, but it was a quiet one. You had one mount, a big long shot who finished ninth. I don't imagine you got much attention, or any acclaim like you're going to get this year. What did you take away from the experience of riding in your first Breeders' Cup last year at Del Mar?

OM: It's a fantastic event. Obviously, frankly, I've always wanted to do very well there, both for European trainers and American trainers. I want to get to the very top level, and I'm 23 years of age–but I'm hungrier than ever. I want to succeed. Hopefully, this year, I've got some live chances, and I can get my first Breeders' Cup win.

TDN: Here in the U.S., we have a saying–and I don't know if you have the same saying in Ireland or England–but we say that an athlete is “in the zone.” Basically, that means they're focused, they're hot, they're doing everything right, and when you look at what you've accomplished since August, six Group 1s, including the Juddmonte International, the Sussex Stakes, the Irish Championship Stakes. Are you “in the zone,” and if so, why? What's going on right now in particular that you just seem to be doing everything right, and winning so many big races?

OM: I'd love to say I've been “in the zone” for a few years, but now, I'm getting the opportunities. I don't have anything obstructing me as such. I live, breathe, and dream racing. I know how important it is to keep the people I'm riding for happy, and to do my job as best I can. But now, I'm really getting chances, and obviously Qatar Racing is growing all the time. With time, they're buying better and better horses, and I'm connected to Andrew Balding and also Phoenix Thoroughbreds, who've done very well in the U.S. this year. I ride for all these great people, and they're putting me up, and I want to do as well as I can for them. That's my complete focus. I don't have anything else.

TDN: What do you think that a Breeders' Cup win might do for your career, and your reputation?

OM: It would mean a lot, because I haven't had many opportunities to ride in the U.S. Some of the absolute top horses in the world over the last few years are American horses, like American Pharaoh, Justify. I followed their career paths. As European riders, we don't get many opportunities to visit the U.S. We've got a very busy schedule here. But Ryan Moore talks about these sort of races–the Triple Crown and the Breeders' Cup–all the time. Your Triple Crown is something he really would like to be part of. It's rubbed off on me. I'd love to get the opportunity to ride a little bit more on dirt. I'm low on experience, but I'm very hungry, and that is the dream for me. The beauty of being a flat jockey is you can ride all over the world. I remember watching the Dubai World Cup, and the Preakness, when I was about 10 or 11 years of age, and hoping one day, I might be part of them. It's a possibility now, and that's a great position to be in.