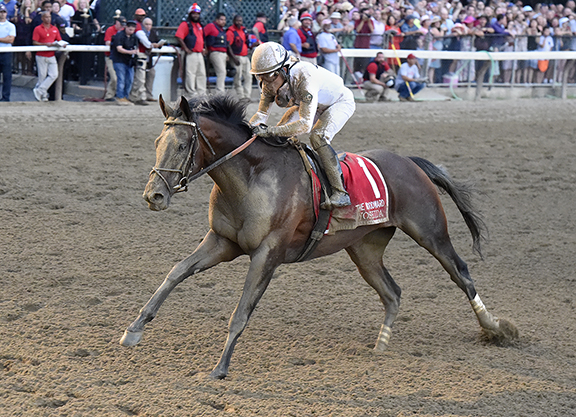 A top-class racehorse on the track, Yoshida (Jpn) was as durable as he was successful, winning $2.5 million, split almost equally between dirt and turf. In the last two years of his career, he ran 10 times-nine in Grade I races, and once in a Grade II. A TDN Rising Star out of his first start at Keeneland, he went on to win the GI Woodward in his first start on the dirt, and the GI Old Forester Turf Classic S., earning a 106 Beyer. Kelsey Riley stopped by WinStar Farm to talk with David Hanley about the first-year stallion.

TDN: There's a lot to cover in his career, but what particularly stands out to you?

DH: How sound and tough he was. Normally, horses come back to the farm as they've got some issue along the way, but he ran for four years and I don't remember him coming back except to freshen up. He also ran at Ascot and was only beaten a length in the Queen Anne S. without Lasix, without any medication, with all the controversy about Lasix and medication, it's interesting that he was able to compete at the highest level without anything. So he's an extremely sound horse and an extremely tough and genuine horse.

TDN: Were there any of his performances in particular that stood out to you?

DH: I think that his run in the Woodward was amazing. I also think that his run in the Breeders' Cup Classic, where he came finishing and only got beat in length was an incredible run. I think all in all he was just a really tough horse, and to be able to run on the turf and the dirt with two different styles of running, it says a lot to his character and his determination to run.

TDN: At WinStar, the Halo line is one that you guys have already been successful with with More Than Ready.

DH: There are a few really interesting things to observe in his pedigree. First of all, he's by a son of Sunday Silence, Heart's Cry, who was a top racehorse himself. But interestingly, when you look at Sunday Silence and you look at Deep Impact and now Heart's Cry–both really incredible stallions-they're bred very similarly. Deep Impact is out of a mare called Wind In Her Hair (Ire) who was by Alzao, who's by Lyphard. She won the Irish Oaks going a mile and a half on the turf. I was there the day she won at the Curragh. And then you've got Heart's Cry. Heart's Cry, his dam was by Tony Bin who won the Arc de Triomphe going a mile and a half on the turf. Wind In Her Hair's second dam in Highclere (GB). So it's that great Queen's family that's been a phenomenal family, but it's stacked with that stamina with (Wind In Her Hair's broodmare sire) Busted (GB) down there on the bottom. So you take a horse like Sunday Silence that won the Preakness, the Derby, and the Breeders' Cup, and you breed them to those turf pedigrees, and he comes with two of the best stallions, two of his best sons. So to me it's really interesting to bring as a son of Heart's Cry back here and breed them to speed. With all the opportunities he's going to have in America, the deck is really stacked for him to be really successful here, and I can assure you everybody here at WinStar is really excited about that.

TDN: You bought Yoshida in Japan, and I believe you weren't there, but can you kind of tell us how that transpired and what the team over there had to say?

DH: Elliott and Tom Ryan and Mike Wallace went out there. Ideally they wanted to try and buy Empire Makers, by a yearling with the top American pedigree on the bottom. But really at that time Heart's Cry really wasn't the one, Deep Impact was the one. It was really difficult to buy the Deep Impacts. I remember Elliott sent me a video and said the horse I really want to buy is the Heart's Cry colt. What led them to him was his demeanor and his attitude. I think what he was seeing was that Halo, that Sunday Silence determination. Elliott told me this horse has a huge presence about him, and obviously Tom and Michael were totally on board and they paid $730,000 for him; to buy a Heart's Cry to bring to America was quite a leap of faith. I think they really believed in the horse when they bought them and it's panned out really well.

TDN: And now, you said at that time Heart's Cry wasn't the one, but obviously he's had the Horse of the Year over there this year (Lys Gracieux {Jpn}) and then last week, Yoshida's own three-quarter sister won a stakes.

DH: Now that Deep Impact has died, Heart's Cry has really stepped up. Again, when you talk about the brilliance of More Than Ready, Catholic Boy wins the Travers on the dirt, these horses just step up and do really cool things. Heart's Cry has shown the same. Lys Gracieux won the Cox Plate.

TDN: I think the last thing that we have to talk about is just the horse's conformation. Can you just tell us what he looks like?

DH: He's a really solid horse. Very, very correct, very sound limbed, has a lot of substance, very, very good mover. But the thing about him is he's got a steely tough mentality. Sunday Silence obviously was a tough character and I think that sire line have got that in them, that fight in them, that determination. And that's magic. Good stallions have something different. You talk about Galileo, they just want to train hard. They want to run hard. I think you probably can say the same thing about Sunday Silence and Halo and that's why he was one of the breed shaping sires in the world over the last 10 years.