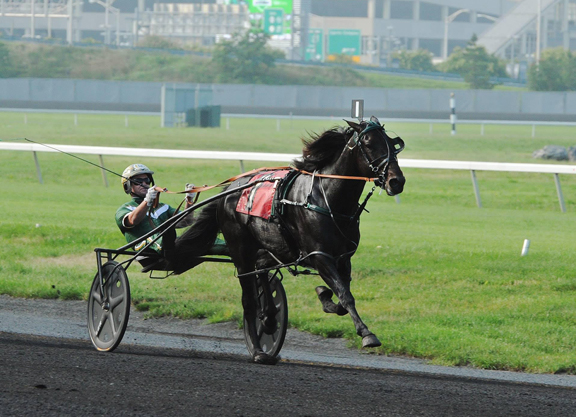 Lazarus in his qualifier at the Meadowlands | Adam Strom

Taylor Made is the leading consignor in the sport, stands several top stallions and operates the racing partnership Medallion Racing. It seems like the Taylor brothers are always looking for new area's of the industry to conquer, and they've found another one–harness racing. Typical of Taylor Made, they're not dipping their toe in the harness racing waters but looking to make a huge splash.

Taylor Made recently purchased the top pacer in New Zealand, Lazarus. With a record of 35 for 45, including 15 Group 1 wins in New Zealand and Australia, he will make his U.S. debut Friday in the $300,000 Dan Patch S. at Hoosier Park. So far, he has earned the equivalent of $2.66 million U.S. during his career.

He will be trained by Jimmy Takter, widely recognized as the top trainer in harness racing, and Yannick Gingras will drive.

“We had a long time friend of ours, Steve Stewart (who operates the harness breeding farm Hunterton Farm),” explained Taylor Made CEO Duncan Taylor. “The Stewart family grew up down the street from us. Steve had been telling me that in the Standardbred business there was room for a stallion farm that wanted to come in do things the right way. An opportunity came up. We thought that the business proposition looked good and we love horses and we love Standardbred racing. We thought, 'let' give this a shot.'”

Taylor Made acquired its first Standardbred last year when going in with Stewart on the stallion What The Hill, who crossed the wire first in the 2017 Hambletonian, but was disqualified. It was an interesting move but not one that grabbed a lot of headlines. That hasn't been the case with Lazarus.

“In New Zealand, this horse is like Secretariat,” Taylor said.

The Taylor team sees this as a smart business move, but Duncan Taylor admitted that nostalgia played a part in the decision to get involved in Standardbred racing. Taylor's grandfather owned and bred Standardbreds and his uncle was a driver. His father, Joe, spent many years with Standardbreds at Gainesway Farm, when they were in the harness racing business.

“When I was seven to 12-years-old we used to get out of school every October and we'd get to go to Pennsylvania to the horse sales for a week,” Taylor said. “My granddad would take his horses there and sell them. We always loved that.”

While Lazarus, who is six, could have a very productive year on the racetracks in the U.S. and Canada, Taylor Made is mostly interested in cashing in on him as a stallion. He will shuttle back and forth between Australasia and New Zealand and the U.S.

“Because of what he has accomplished Down Under, we know we have that market there already locked up on breeding,” Taylor said. “If he can come up here and have success, we'll be able to shuttle him and do well in both markets. Our main goal is to win the Breeders' Crown. We won't be disappointed if he races good but gets beat a time or two between now and then. If we win the Breeders' Crown, that would be really great.”

There have also been some misses. In 2010, a horse named Auckland Reactor came here from New Zealand and was hailed as another superstar. He failed miserably in the U.S., making three starts without ever finishing in the money.

But all signs point to Lazarus rising to the top of his division. So far, he has had just a qualifying race, a non-betting race Standardbreds are required to have after they have not raced for a certain period of time. He won by a length in 1:48 3/5.

“I could feel pretty early that he was a little special,” Takter said. “You could feel it. This is not just a horse. We knew that, but you never know. He came from a totally different continent. Everything is different. I've never been in New Zealand or Australia, but everything is so different compared to our racing. You never know how they're going to do. But a lot of these horses that have come from Down Under have done well. And he was one of the best they ever had down there.”

“I've watched video of his races and you see him do things and you go, 'Wow.'” Gingras said. “It's been really impressive. I don't think people here realize how great he is. When I got to sit behind him the other day [in the qualifier], I found out he is such a laid back horse. I was under instructions to go from the gate to see what he had and he really exploded out of the gate and then he relaxed. He did it very nicely. When I asked him around the last bend he was just gone. The burst of speed that he had was really impressive.”

American sires are dominant in both Australia and New Zealand. However, there are very few examples of Down Under horses coming here to be sires. But since Lazarus is by an American sire and may win several important races on North American soil, he could be the type to break through and become a top stallion on both hemispheres.

That, anyway, is what Taylor Made is hoping for. And Duncan Taylor said they are not done and will be scouting for more Standardbred stallion prospects in the future.

“Our main focus will still be the Thoroughbreds,” Taylor said. “But we're finding out that Standardbred racing is a really fun sport.”