Taylor Made, WinStar Partner on Breeding Rights to Midnight Storm 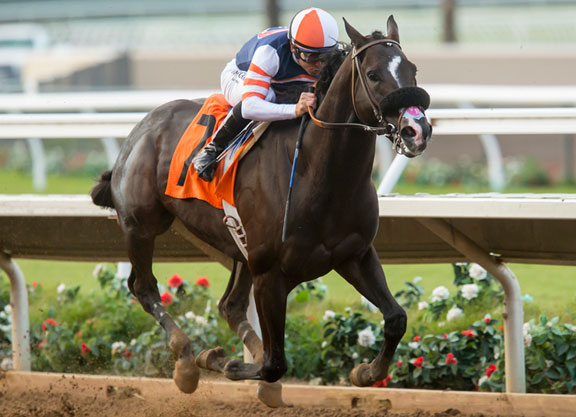 Taylor Made Stallions, in partnership with WinStar Farm, has entered an agreement with Alex Venneri Racing and Little Red Feather Racing to purchase the breeding rights to versatile Grade I-winning $1.78 million earner Midnight Storm (Pioneerof the Nile–My Tina, by Bertrando) upon his retirement from racing. The Phil D'Amato trainee is being pointed to the GI Breeders' Cup Dirt Mile Nov. 3.

“Midnight Storm has absolutely everything you look for in a stallion prospect, and we are beyond excited about his potential at stud and Taylor Made having the opportunity to stand him after his racing career is complete,” said Taylor Made's Duncan Taylor. “He's a gorgeous horse, and by a budding superstar stallion in Pioneerof the Nile, who's proven his impact with 2-year-old champions like American Pharoah and Classic Empire–both top classic horses. Cairo Prince is also showing commercially just how hot the sire line is.”

He added, “Midnight Storm possesses tremendous natural speed like American Pharoah did, and some of the speed figures he's earned have proven just how gifted he is. What I love about him is his versatility and soundness. You don't see horses that can compete at the highest level and win major graded races on both dirt and turf very often, and do so in very fast times. You also don't see horses that fast hold up like he has, which is a tribute to his conformation and athleticism. This horse has it all.”

The 6-year-old kicked off a three-race winning skein on the grass in last year's GI Shoemaker Mile before adding the GIII Native Diver S. and GII San Pasqual S. on the dirt in November and December, respectively. He was second in the GI Santa Anita H. going 10 panels on the Santa Anita main track Mar. 11, and filled the same slot in the GI Awesome Again S. last out Sept. 30. He boasts six total graded stakes victories.

“We are excited for Midnight Storm to join the likes of Tiznow and Speightstown as stallions we have partnered with Taylor Made on,” said WinStar Farm's Elliott Walden. “I love this horse's brilliance, durability and consistency, which are qualities he gets from his sire Pioneerof the Nile.”