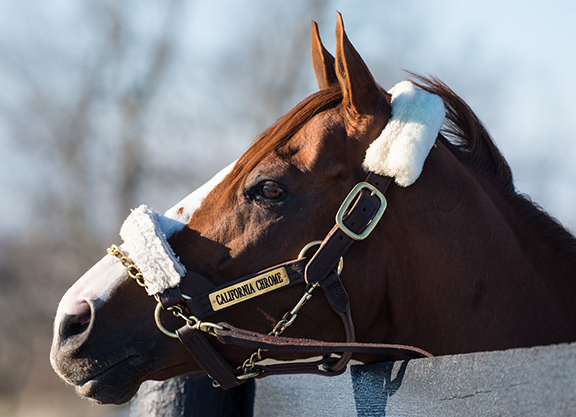 Taylor Made Farm and adventure magazine True.Ink have joined forces to offer the public a chance to vote on a mare to be covered by dual Horse of the Year California Chrome (Lucky Pulpit) who is standing his first season, with an opportunity to buy shares in the resulting foal. The public is invited to follow the whole process from conception through birth via immersive experiences on the farm, along with other stable matters. (Click here to view the project's website.)

“This project is a real opportunity for all of us to experience what it's like to not only own a horse, but learn about the process from conception to the racetrack, and share it all in real time,” said Duncan Taylor, President of Taylor Made. “The goal is to increase the amount of fun, joy and inspiration of breeding a horse, without the heaviness and stress of a big investment.”

The opportunity is available specifically to members of “The People's Horse,” racing's newest club, which was launched by True.Ink last year via the crowdsourcing platform Indiegogo. True.Ink raised nearly $50,000 from over 440 backers. The membership plans range from $100 to $500, with “Chrome Cash” also available to members who sign up their friends.

Added Taylor of the popular dual Classic winner and G1 Dubai World Cup hero, “He inspired the masses, never let anyone down, and showed that anyone can rise to the top through hard work and dedication.”

“True.Ink joining forces with California Chrome and Taylor Made to form The People's Horse club is the next chapter in an incredible underdog tale, and part of our mission to make our readers part of our adventures,” said Geoffrey Gray, True.Ink's founder and a New York Times bestselling author. “This is something anyone can root for, be part of, and have access to a historic, once-in-a-lifetime experience.”

TDN Q & A WITH DUNCAN TAYLOR

TDN: Where did this idea come from? Who approached whom?

DT: I don't know who Geoff Gray talked to, but he said that he went around Kentucky and asked people who might like to get involved in this sort of project and he said he kept hearing Taylor Made, talk to Duncan Taylor, he is someone who might do it. So when he came to me I told him that I thought this was a great idea and the timing was perfect because we have California Chrome and he is the ultimate 'People's Horse.' So we worked on the idea together. We bought quite a few mares to breed to Chrome and there were three of them that we bought on our own that we didn't have any partners. So we picked those three and we're going to let the people vote on which mare they want us to breed to Chrome, which mare they want to have a foal out of. That will be 'The People's Horse.' We'll then follow through and see if we want to race him or sell him.

TDN: Considering all the fun and excitement the partners will have enjoying watching the horse run, I'm a little surprised to hear you say you might sell him?

DT: We plan on racing the horse. That said, in the horse business you never know what might happen. If for some reason there's not enough interest in this or not enough people get involved, we can't rule out selling the foal. But we don't see that happening and the plan is to race the horse.

TDN: The mares people will vote on are Colerful Bride (Munnings), Barbara Orr (Tale of the Cat), and Sixtyfivenorth (Midshipman). If it were up to you, which one would you chose?

TDN: What kind of input have you gotten from Geoff?

DT: What's cool about Geoff is that he brings to the table more of an outsider's view of how to entertain the people and how stuff people like you and I may not understand is important. We were talking about whether we want a fetal sex or not want a fetal sex on Sixtyfivenorth, who is already in foal. He said, 'Let's do it; the people will think that's cool.' He wants us to get videos of the vet ultrasounding the mare and show them to the people. These are things we take for granted, but things an average person would want to experience if they owned a horse. They'll be able to experience almost everything a normal horse owner gets to experience, feel like they are part of the horse community, and do so at very little cost.

TDN: Geoff already has 440 people signed up for The People's Horse project. Will this endeavor be open just to those people?

DT: It's certain that all 440 will stay in. The great thing is that in a digital world we can serve an unlimited number of people and give them all the same experience. Then if we have a barbecue or something at the farm they can all come and meet each other. It really lends itself to being able to entertain a lot of people.

TDN: Then how many people would you like to get involved with “The People's Horse?”

DT: I don't know if there is a perfect number. I'd like to see as many as possible get in. It exposes the horse business to that many more people. One of things I thought when we were giving money to the V Foundation from Chrome's earnings was the good we could do. When somebody is in the hospital suffering from any disease, there is a lot of stress, and that's a big factor. They also have so little to look forward to. We never really got it worked out, but I was telling the V foundation that I would like to send Art Sherman to do weekly interviews at some hospital to talk about Chrome. The patients could have then followed him and when he runs they could have watched the race and cheered for him. Because he was already running for cancer, we could have exposed all the patients and their loved ones to the joy horses bring people.

TDN: When someone puts up money to get involved in the project are they more or less just joining a fan club or will they have equity in the horse?

DT: I know that, at the very least, at the $500 level, Geoff is planning to offer these people a chance to buy in if they want to. I think the later we let this go the better because the longer they wait the better chance they'll have of knowing how the horse will turn out. So, we haven't really picked a time when equity will be offered. There's a lot in this area that we still have to figure out.

TDN: Will the horse be named The People's Horse? It looks like that name is out there and available.

DT: Well, Geoff already has The People's Horse. When he started the concept he went around the country with a big fiberglass horse that was The People's Horse. He would go to places like the Derby and people would come and sign the horse and he would then go to the next big race. The idea, in its infancy, people were going ahead and signing up and paying to be part of the 'People's Horse' project. But if the name for the real horse is available, I don't see any reason why we wouldn't want it.

TDN: You seem very enthusiastic about what this project can accomplish.

DT: I am. I've really enjoyed aligning ourselves with the Horse Country tours and having people coming out and touring the farm. The people come and they get to enjoy the horses. It gives me joy watching people be happy around horses and seeing how cool they think it all is. I think this new experience is going to bring many of the same benefits. I've been involved with horses my whole life and, for me, it's just a way of life. It's so nice to see someone else come and really enjoy the horse and this is an extension of that same thing.

Someone told me other day that Darwin said that the horse was the best animal to use to study genetics. It was amazing to think that Darwin was talking about horses. There are three stallions and 30 mares they all trace back to. And we all know what Churchill said about the outside of a horse is good for the inside of a man. Horses have been such a big part of human activity throughout time and I think that's one of the reasons people just innately love horses.

TDN: Speaking of the Horse Country tours at Taylor Made, how are they going now that you have a big time celebrity in the house?

DT: Great. We basically have limited the tours to 25 a day and have been sold out for the last three months.