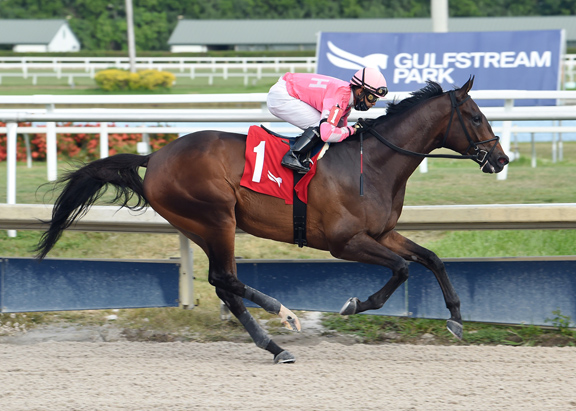 The 2019 GII Jim Dandy S. and GIII Withers S. winner hit the gate running from his rail draw and Luis Saez was able to dictate very manageable fractions of :23.87 and :46.96. He began to give them the slip as they hit the top of the stretch and was home free from there, running up the score under confident handling, just missing Social Inclusion's 2014 track record of 1:40.96 by less than a fifth of a second.

A distant ninth at a well-backed 4-1 after stumbling at the start in the 2020 Pegasus back in January, Tax only made one start since, finishing fifth in the GII Oaklawn H. May 2.

Claimed for $50,000 out of his maiden breaker at Keeneland in October 2018, Tax's resume also includes runner-up finishes in Aqueduct's 2019 GII Wood Memorial S. and GIII Discovery S. and a third-place finish in the 2018 GII Remsen S. He was also a respectable fourth in the GI Belmont S.

The Harlan's Holiday was his first victory since capturing the Jim Dandy over Tacitus (Tapit) and Global Campaign (Curlin).

“We have really, really been high on him,” winning trainer Danny Gargan said. “We really thought he'd run big at Keeneland, but he got sick on us and caused him to miss the race. I got really depressed about it because I was waiting to run him. Today, he showed up. I think this will be his best year. He's grown, developed. He's sound. He's bigger, stronger than he's ever been. I couldn't be happier with him today.”

Tax is the product of three generations bred by Claiborne Farm and Adele Dilschneider out of Wild Applause (Northern Dancer), who Seth Hancock bought from Rokeby Stables for $1,025,000 at the 1992 Keeneland November sale. Wild Applause and her dam, the blue hen and Broodmare of the Year Glowing Tribute (Graustark), were both bred by another benchmark in the game: Paul Mellon and his Rokeby Stables. Mellon and Charles Englehard had purchased Glowing Tribute's dam, Admiring (Hail to Reason), for $310,000 at Saratoga in 1966, setting the world record for the time for a Thoroughbred sold at public auction. Admiring's third dam was the incomparable breed-shaper La Troienne (Teddy), making Tax a direct tail-female descendant of La Troienne. The top-class winners, champions, and sires hailing from this family are an embarrassment of riches, as evidenced by Tax's dam herself being a half-sister to the dam of MGISW Elate (Medaglia d'Oro). Toll, who sold for just $50,000 at the 2018 KEENOV sale months prior to Tax's breakout success, has a yearling Blame filly and has been bred to Bee Jersey for next term. Tax's late sire, Arch, stood at Claiborne and sired 70 black-type winners, 42 of which are graded. Arch hails from another of the greatest female families in the stud book–his third dam is Broodmare of the Year Courtly Dee (Never Bend)–making Tax possibly the best-bred gelding in the history of Thoroughbred racing.