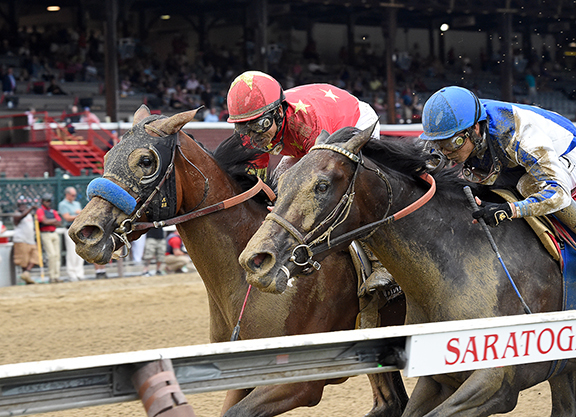 “Seems like everything's good,” Terranova said Monday morning. “[She was] bucking and playing around the shed row this morning. She's pretty cool, pretty laid back about everything. She's good to go. She'll go hang out at the beach for a while now.”

In the wake of the race, Baffert commented that Abel Tasman could return to Saratoga for her next start in the GI Alabama S. Aug. 19. CCA Oaks runner-up Elate, however, seems to be likely for the Alabama, according to trainer Bill Mott. The 'TDN Rising Star' emerged from a hard-fought race, where she was put in tight along the rail in the stretch before coming up a head short, relatively unscathed.

“She looks pretty good,” Mott said. “She had a little grab, she stumbled a little bit leaving the gate and touched the outside of her foot a little bit. It doesn't look like anything serious.”

As for the stewards' decision to allow the result to stand following an inquiry and jockey's objection, Mott said he understood the line of thinking, while tipping his cap to the winner.

Speaking of the winner, Mott continued, “She's an accomplished filly that's done very well. Three in a row, so can't take anything away from her. All we can do is try to beat her if she comes back. Come on back, we'll try again.”