Taraz Breaks Down, Is Euthanized, at Oaklawn 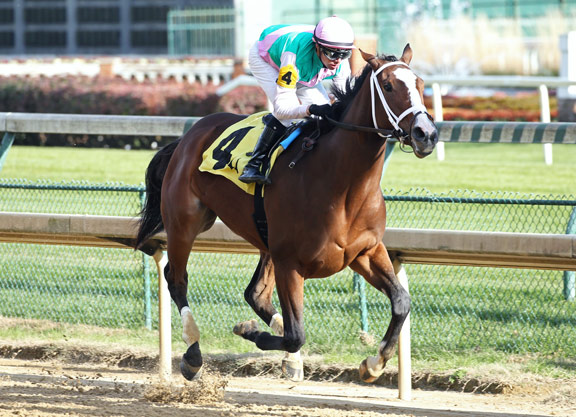 Taraz (Into Mischief), a 3-year-old filly who seemed poised to emerge as a major star, was euthanized Monday after suffering an injury during a workout at Oaklawn Park. The news was confirmed by her owner and breeder Juddmonte Farms, which issued a statement shortly after the injury.

“Taraz severely fractured her left front pastern this morning in a workout at Oaklawn Park,” the statement read. “She was transported back to the barn where X-rays were taken and reviewed, with the attending veterinarian consulting Dr. Bob Hunt of Hagyard. Given the extreme nature of the damage to the bone and compromise to the blood supply, it was agreed that repair was impractical. Having consulted between trainer Brad Cox, veterinarians and Juddmonte management it was deemed best to euthanize the filly.”

Though she raced just three times, Taraz was among the most talked about horses in racing. She broke her maiden at Churchill Downs by 7 1/2 lengths, for which she earned the ‘TDN Rising Star‘ designation and then came back with an 11 1/4-length victory in the Lettelier Memorial S. at the Fair Grounds. Cox then sent her to Oaklawn, where she won the Martha Washington S. by 3 3/4 lengths in her first try around two turns.

“I love her,” jockey Florent Geroux said after the Martha Washington. “She ended up good today. I think she’s definitely super talented.”

Cox and Juddmonte were so high on the filly that after the Martha Washington, they announced that she would be nominated to the Triple Crown and that they might pick a race against males for her next start. Ultimately, they chose the Mar. 7 GIII Honeybee S. at Oaklawn against fillies for their horse but kept the GI Kentucky Derby option open.

“We would leave our options open, for sure,” Cox said of the possibility Taraz could still wind up in the Derby. “Anything can happen. I started getting better horses a few years back; you try to keep them nominated as much as you can and leave your options open.”

Cox often referred to the massive size of his filly.

Though there is no making up for the loss of such a a talented horse, Cox may still be represented in the GI Kentucky Oaks as he is also the trainer of 2019 Juvenile Filly champion British Idiom (Flashback). She finished second in her 3-year-old debut in Saturday’s GII Rachel Alexandra S. Presented by Fasig-Tipton.