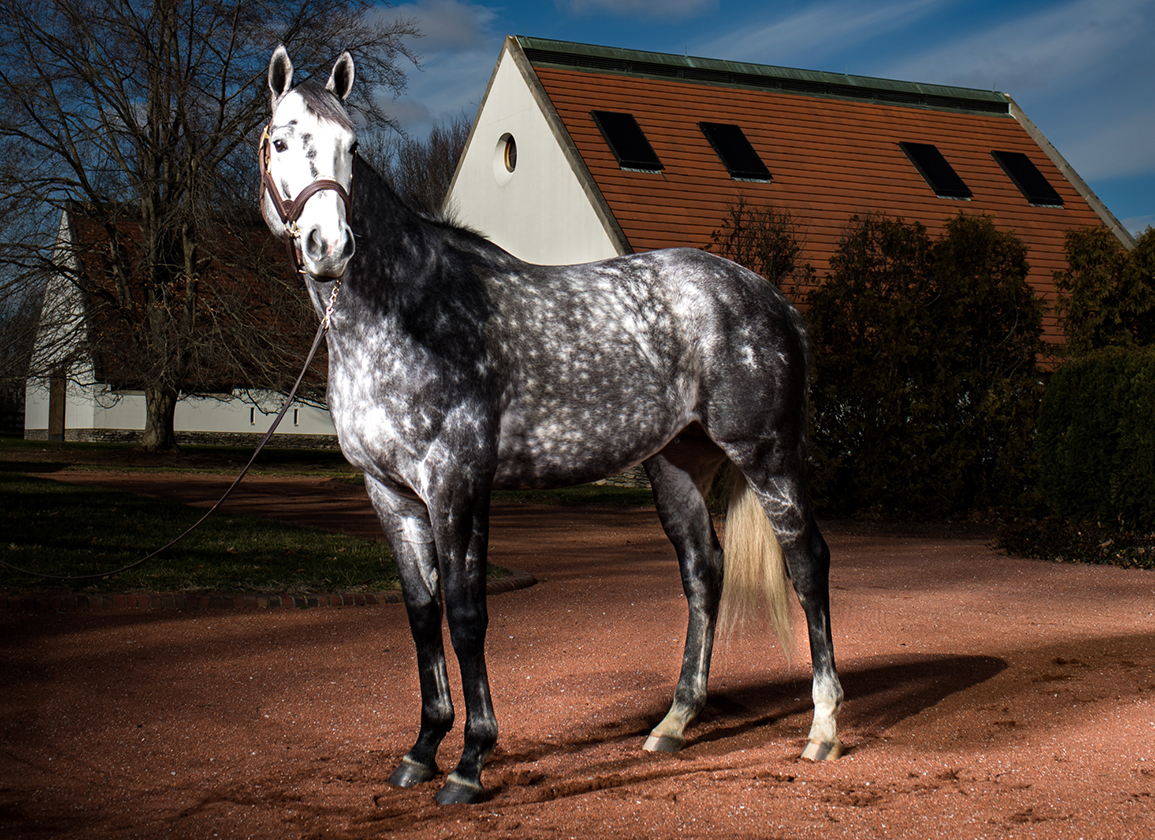 Tapwrit is one of two Belmont-winning sons of Tapit to also be a stakes winner at two. | Equisport Photo

After 'TDN Rising Star' Essential Quality's sound victory in the GI Belmont S., his sire Tapit became one of only two stallions in history to produce four winners of the Classic test. In doing so, the champion sire did one of his other Belmont-winning sons, this one also a fellow Gainesway stallion, a favor by reinforcing the market's every-growing esteem for Tapit bloodlines. The achievements of Essential Quality and Tapit came at just the right time for Tapwrit (Tapit -Appealing Zophie, by Successful Appeal), who will have his first crop of yearlings hit the market this year.

“Certainly Tapit's status in the Kentucky stallion ranks and the all-time ranks of stallions keeps getting elevated every year,” Gainesway's Sean Tugel said. “He has produced four outstanding winners of the Test of the Champion, with Tapwrit being one of them, which was exciting because Tapwrit was able to break his maiden as a 2-year-old and be a 2-year-old stakes winner, but also carry that speed and precocity to go a mile and a half and win a very impressive Belmont S.”

Essential Quality and Tapwrit are Tapit's only Belmont winners to also be stakes winners at two. The other pair, Tonalist and Creator, did not break their maiden until early in their sophomore year.

After selling for $1.2 million to partners Bridlewood Farm, Eclipse Thoroughbred Partners and Robert LaPenta at the 2015 Fasig-Tipton Saratoga Select Sale, Tapwrit broke his maiden at second asking and then took the Pulpit S. at Gulfstream as a juvenile. At three, the Todd Pletcher pupil ran second in the GIII Sam F. Davis S. and took the GII Tampa Bay Derby before his eventual two-length win at Belmont Park.

Retiring after his 4-year-old season with earnings of over $1.3 million, Tapwrit joined his sire at Gainesway Farm in 2019.

But he wasn't the only son of the Tapit to join the stallion ranks in Kentucky. Nearly ten young sires by Tapit had started their stud careers in the Bluegrass in the three years before Tapwrit came around. What set this newcomer apart?

“I think what separates Tapwrit from many other sons of Tapit is that he has that Grade I form on the bottom side,” Tugel noted. “His dam, Appealing Zophie (Successful Appeal), was a Grade I-winning 2-year-old. That gave him the precocity to run not only at Saratoga as a 2-year-old, but break his maiden and be a stakes winner.”

Of the nine sons of Tapit standing in Kentucky today, Tapwrit holds the distinction of the only son of a Grade I winner.

“It's a very active family and a very precocious family,” Tugel said. “And Tapwrit is the best in that family.”

The Classic winner's propensity to combine precocity and the ability to stretch out as an older horse, Tugel added, is another indication of success at stud for Tapwrit.

“Over the last 15 years, Union Rags and American Pharoah are the only other [current sires] that have won a 2-year-old stakes race and also won the Belmont at a mile and a half. Those are two sires that have done well in their early careers, so if Tapwrit can follow suit, the sky is the limit for him.”

When Tapwrit joined the roster at Gainesway with a $12,500 initial stud fee, breeders supported the newcomer with 154 mares in his first book. He remained at the same fee the following year and was given a minor COVID-induced adjustment this year at $10,000. The early results on his first crop of foals were positive enough to keep the breeders coming in years two and three.

“He bred 249 mares total in his first two years and we're still piling up the mares here in year three, but the physicals that he has produced is helping him maintain very solid book sizes,” Tugel said.”He was a $1.2 million Saratoga yearling and is now throwing his good looks to his offspring.”

Tugel explained how he believes Tapwrit is passing some of his best attributes on to his first few crops.

“There is no rubber stamp for what a good Tapit looks like, but we see that Tapit himself produces good balance in his offspring and that's what we're seeing in these Tapwrits,” he said. “They look athletic and have a nice amount of leg and good bone to them.”

At the weanling sales, Tapwrit's first crop averaged $46,444 with 18 of 26 sold. His top-priced weanling, a colt out of the Smart Strike mare Smart N Soft, brought $100,000 to Black Cat Stable at Keeneland November.

“I think the weanling sales really helped him gain some traction as a third-year horse,” Tugel said. “When a stallion's initial crop can get the attention of both pinhookers and the breeders, it's a great storm to maintain really good support for a horse early on in his career. By producing the physicals and replicating his outstanding looks, we're very excited to bring his first crop of yearlings to the sales this year.”

At the upcoming Fasig-Tipton July Sale on July 13, Tapwrit will be represented by nine first-crop yearlings.

“The fact that he has nine in there tells you how early they're maturing,” Tugel noted.”They're horses that look not only like they're going to make the races early, just like himself and his dam, but that they should hold together and mature to be good two-turn route types that we want to win the Oaks and the Derby.”

“He's been a big, strong colt from the time he hit the ground,” Belcher said. “He precocious, good-minded, has a good walk and a great physical. We think he's going to appeal to the end users and the pinhookers.”

The young colt is a three-quarters brother to Drop Anchor, a 3-year-old son of Anchor Down that won on debut at Ellis Park last summer as a juvenile.

“The Tapwrit colt has a wonderful demeanor to him when he comes out of the barn,” Belcher said. “He has a presence and you can't really help but take a look at him. He really has that, 'look at me, I'm something special' [attitude] and he's got a great mind. He's very easy to work with and we've enjoyed having him.”

“They have a lot of class and a lot of intelligence,” he said. “They enjoy the prepping and they enjoy having something to do. You want horses to like what they do and be smart about it, and that's something we've seen in the Tapwrit yearlings. They should handle the sales process and breaking process really well, so we're chomping at the bit to let the public see them.”