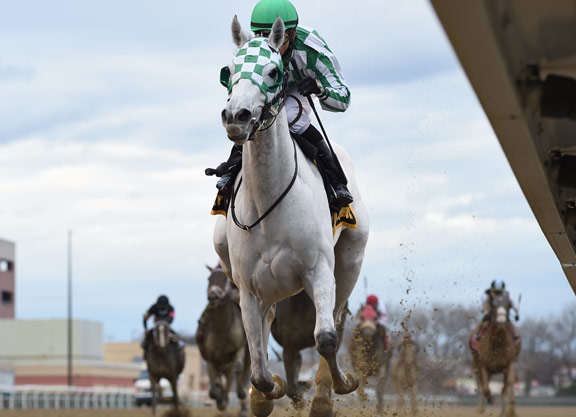 Mrs. Danvers went virtually gate to wire to earn her first stakes success with a dominant score while trying two turns for the first time in the Comely Friday at the Big A. Seizing the early advantage, the gray loped through a :24.30 opening quarter and was confronted by longshot Project Whiskey, who pressed the pacesetter and led between calls through a :48.69 half-mile. That rival burned out quickly and fell to the back as Mrs. Danvers continued strongly on the front end. The Joe Allen homebred opened up in the lane with ease under a hand ride from Jose Lezcano to win for fun.

“We were anxious to get her stretched out,” said winning trainer Shug McGaughey. “It's just been kind of difficult to do so. This is what we felt like she wanted to do. Watching some of her allowance races, I wasn't sure I was running her right. It looked like she was going to win and then she wouldn't win. I think this is naturally what she wants to do is run this far. Being on the lead today definitely helped. I don't think it's something she needs, but going down the line she'll be forwardly placed.”

The Hall of Famer continued, “Anytime you can get a win with a filly with a pedigree like that, especially for the breeder, [Joseph Allen], it means a lot. He believed in this filly.”

“She's a nice filly,” said Lezcano. “Today, I let her break and run for the first quarter and she came back to me very nice. She was galloping along the whole way around. When I asked her to run, she jumped up in the bridle and took off.”

A second-out graduate at Saratoga in 2019, Mrs. Danvers was not seen again for 10 months, finishing second in a Belmont allowance June 20. Completing the exacta again in the same condition at Belmont July 9, she was fifth to recent GI Breeders' Cup F/M Sprint victress Gamine (Into Mischief) in Saratoga's GI Test S. Aug. 8. Missing by a head back at Belmont Sept. 17, the homebred cleared her first-level allowance condition next out going a mile at Big Sandy Oct. 25.