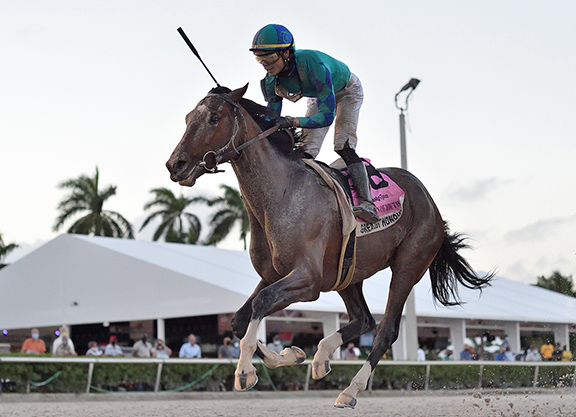 Courtlandt Farm homebred Greatest Honour (Tapit) looked all but hopeless rounding the final bend in Saturday's GII Fasig-Tipton Fountain of Youth S. at Gulfstream, but he flew home in the stretch to complete a huge daily double for his sire. The Shug McGaughey trainee's victory came just minutes after returning champion Essential Quality (Tapit) cruised in Oaklawn's GIII Southwest S. Pacesetting Drain the Clock (Maclean's Music) held well for second, beaten 1 1/2 lengths, while longshot Papetu (Dialed In), who briefly looked like the winner, checked in third. It was the third Fountain of Youth for Hall of Famer McGaughey, who won in 2019 with Code of Honor (Noble Mission {GB}) and in 2013 with Orb (Malibu Moon). The latter, who employed similar late-running tactics and hails from the same A.P. Indy sire line, would go on to add the GI Florida Derby and GI Kentucky Derby.

Developed with the typical patience McGaughey is renowned for, Greatest Honour was third in seven-furlong events at Saratoga Sept. 5 and Belmont Oct. 11, respectively, to kick off his career. He was beaten a head when stretched out to nine panels at Aqueduct Nov. 8 by well-bred Known Agenda (Curlin), who was subsequently third in the GII Remsen S. and most recently took a local optional claimer by 11 lengths on Friday. Greatest Honour broke through over track and trip Dec. 26, and took his game to a whole different level when annexing the GIII Holy Bull S. Jan. 30 by 5 3/4 lengths.

Immediately out-sprinted, Greatest Honour seemed to resent the kickback early while ultimately settling in third last and saving some ground. He appeared to be going up and down after six furlongs in 1:11.51 and as Papetu blew by him from even farther back midway on the home bend. Drain the Clock turned for home with a three or four-length advantage, but he was going to need a bigger cushion than that. Greatest Honour was switched wide and exploded down the center, bounding by with fluid strides to win with room to spare.

“He broke good, a bit slow like he always does, and I put him in the race,” said winning rider Jose Ortiz. “I tried to be as close as I could going to the backside and I got a good path behind Prime Factor (Quality Road). But, when we hit the turn I bumped the horse outside of me and lost my hind end a little bit and it was very hard to get him back going. He's such a big horse with such a big stride. At the three-eighths pole I'm trying to get him going and I got a space on the inside, but I didn't want to have to stop him again, so I decided to go wide and when he hit the clear, boom. He was there for me. Huge run.”

McGaughey, who said the Mar. 27 GI Florida Derby would be next on the agenda, admitted he wasn't feeling confident for much of Saturday's race.

“I wasn't real comfortable,” he said. “I could see what was going on and I felt like if Jose got him in the clear then we could have a shot to make a run at him. The horse that was second [Drain the Clock], when he did break clear I said, 'Uh, oh.' But, he's a really nice horse.”

He continued, “The pace wasn't that fast today, I don't think, but he was able to overcome it. He's won twice down here now in stakes doing what he doesn't want to do, and that's a mile and a sixteenth. Like Jose said, I'm glad these mile and a sixteenth [races] are behind us. We'll be looking forward to getting him stretched out. Hopefully it's in the near future but, if not, I know what we've got. Hopefully as we keep going longer he'll keep improving. The farther the better for him.”

Owner/breeder Don Adam was also on hand to celebrate.

“It's very exciting,” he said. “Being a horse that I bred and the history by which I came by him is very gratifying. I was a little concerned in this one. It looked like he wasn't in the best position, but this will be the shortest race he runs in a long time. And the longer he goes, the better he will be.”

Adam added, “I bought the mare [Tiffany's Honour] in foal to a Tapit colt and that colt hit the ground and was killed in a paddock accident. So, I bred her back to Tapit and got him. I bought her at a Fasig-Tipton sale.”

Click here for more on Courtlandt and Tiffany's Honour and her Tapit colts.

Greatest Honour is one of 88 graded stakes winners by Tapit, but is the only one out of a Street Cry mare. Street Cry also sired the dam of Fearless (Ghostzapper), who took the GII WinStar Gulfstream Park Mile S. earlier on the card. Courtlandt acquired dam Tiffany's Honour after she RNA'd for $2.3 million at the 2015 Fasig-Tipton November Sale in foal to Tapit. The unplaced daughter of GISW and Broodmare of the Year Better Than Honour (Deputy Minister)–dam of GI Belmont S. and GI Kentucky Oaks heroine and class of 2021 Hall of Fame nominee Rags to Riches (A.P. Indy)–produced a War Front colt in 2017 who would go on to fetch $1.1 million at Keeneland September the following year. After producing Greatest Honour, Tiffany's Honour sold to Japan's Katsumi Yoshida for $2.2 million at the 2018 Keeneland November sale.