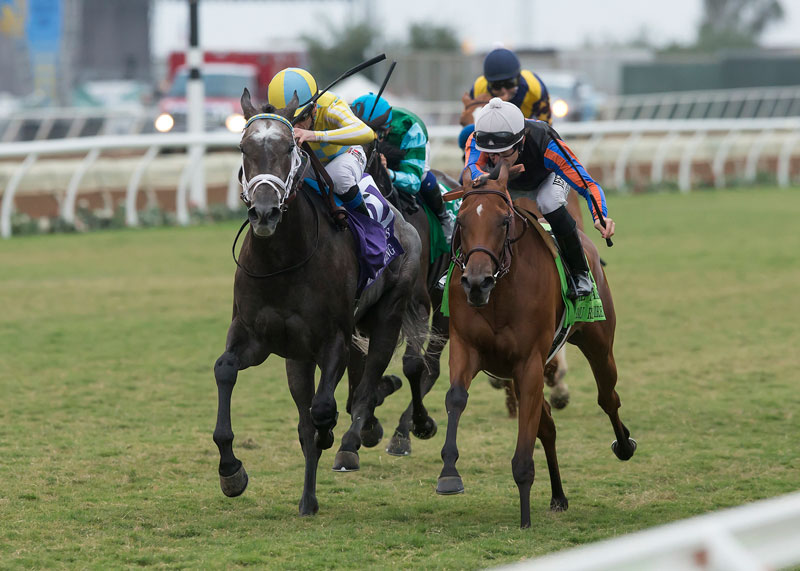 John Oxley's Dream Dancing got the most favorable of bobs and became the 23rd Grade I winner for her sire in Saturday's Del Mar Oaks.

Julien Leparoux wasted no time at all snagging Dream Dancing back into the latter third of the field from their double-digit draw and the duo was third-last with a circuit to travel. Ridden very quietly while allowed to settle into her stride, the homebred held her position through the middle furlongs and still had just two of her rivals behind her as they raced midway on the second turn. With Leparoux waiting for just the right moment to release the hand brakes, Dream Dancing was pulled to the outside of Beau Recall and was fanned about seven wide to deliver her challenge with a furlong and a half to travel. Roused right-handed at the eighth pole, she joined Beau Recall to that one's outside, and although she trailed in the final jump prior to the wire and in the first jump past the line, Dream Dancing dropped her head when it mattered most. Madam Dancelot closed from last to be a very good third, while Sandringham H. winner Con Te Partiro (Scat Daddy) closed off well to be fourth after getting shuffled back leaving the three-eighths marker.

“The last time I rode her, I asked her at the three-eighths and she got a little weary at the end,” Leparoux explained. “This time I tried to wait as long as I could and she was still strong at the finish. This feels good; a win is a win, no matter where you get it.”

Despite breaking her maiden on turf last summer at Saratoga, Dream Dancing was given a chance to make a name for herself on the dirt, but failed to factor in three graded attempts before calling it a season. Victorious in Gulfstream's GIII Herecomesthebride S. in her second start of the season, the gray was runner-up to fellow Oxley runner La Coronel (Colonel John) in the GIII Edgewood S., third to MGISW New Money Honey (Medaglia d'Oro) in the GIII Wonder Again S. and a latest seventh to Saturday's GII Lake Placid S. winner and “TDN Rising Star” Proctor's Lodge (Ghostzapper) in the July 21 GIII Lake George S.

Dream Dancing is out of an unraced daughter of Beautiful Pleasure (Maudlin), a full-sister to MGISW Mecke who gave Oxley the first of his two Breeders' Cup winners when taking the 1999 GI Distaff. Dream Dancing's GSP half-sister Sky Dreamer (Sky Mesa) is the dam of Kimbear (Temple City), runner-up to GII Woody Stephens S. victor American Anthem (Bodemeister) in this year's GIII Lazaro Barrera Memorial S. To Dream About produced the winner's yearling full-brother Dream About, aborted to Empire Maker for 2017 and was most recently bred to Tapit's treble Grade I-winning son Frosted.