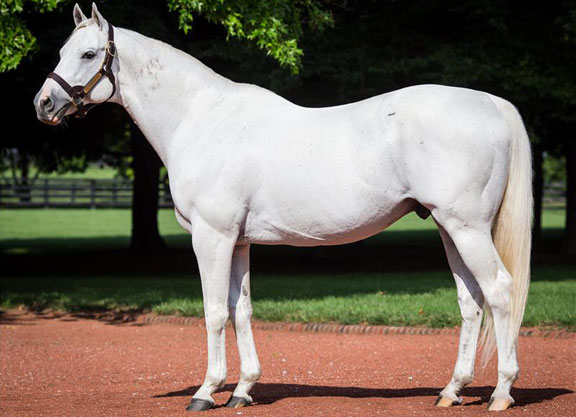 In 2014, four sires which went to stud in Kentucky in 2005 and had their first foals in 2006 (so we denote them as F2006 sires) ranked among the top 10 sires in North America: Gainesway's Tapit was the Leading Sire in North America, with a record $18.6 million in progeny earnings. Candy Ride, who started at Hill 'n' Dale and moved to Lane's End, ranked fifth, with 2014 progeny earnings of $10.5 million; Medaglia d'Oro, who also started at Hill 'n' Dale, then spent several seasons at Stonewall before being transferred to Darley, was sixth, with earnings of $10.0 million; and WinStar's Speightstown finished 10th on the 2014 North American General Sire List with progeny earnings in 2014 of $9.4 million.

In 2015, these were four of the top eight sires on the North American General Sire List. Tapit repeats as Champion Sire, breaking his own record with 2015 progeny earnings over $19 million. For good measure, this year he is also the leading sire in North America in every black-type category we list, with 23 Black-Type Winners in 2015; 47 Black-Type Horses; 16 Graded/Group SW and 29 Graded Stakes Horses; and five Grade I/Group 1 winners and 10 Grade/Group 1-placed Horses.

And there's more: he's the leading sire in number of winners, with 174. Winning one sire championship is a great accomplishment; repeating and dominating all the black-type categories plus number of winners–a pretty rare achievement. Tapit is graduating from Leading Sire stature to superstardom.

Medaglia d'Oro moves up to second on the North American General Sire List, with the earners of $13.5 million in 2015; Candy Ride maintains his position in fifth ($11.4 million); and Speightstown advances to eighth, with 2015 earnings over $10.2 million. It is a truly awesome group of sires, and the fact that Tapit has finished roughly $5 million clear of all of them and all his other stallion contemporaries two years in a row speaks volumes–as does his $300,000 stud fee, easily tops in North America. In eight crops of racing age, Tapit has now sired 71 black-type winners (148 Black-Type Horses), 43 graded/group SW; and 16 Grade/Group 1 winners.

Ashford's Uncle Mo is not just Leading Freshman Sire, but also Leading North American Sire of 2-Year-Olds with 28 winners, seven black-type winners, and the earners of over $3.7 million, including undefeated champion-elect Nyquist. It was some performance to surpass his late lamented Ashford barnmate Scat Daddy, who led the list for much of the fall and has 36 2-year-old winners, nine of them BTW, six GSW and the earners of $3.3 million. Darley's Bernardini nips Tapit for third, followed by Medaglia d'Oro and Claiborne's War Front, sire of Group 1/Grade I winners Air Force Blue and Hit It A Bomb for the Coolmore team from his first crop of better mares.

Ashford also sports the one-three on the North American 2015 second-crop, with Munnings leading all North American second-crop sires by number of winners (69), races won (122), 11 black-type winners, 16 black-type horses, and 2015 progeny earnings right around the $5-million mark. WinStar's Super Saver, sire of five graded stakes winners this year, including champion sprinter-elect Runhappy, is second with over $4.4 million in 2015 earnings, with Ashford's Looking At Lucky third with $3.9 million in 2015 earnings.

The two best sires in Europe are Coolmore's Galileo and Darley's Dubawi. Looking at worldwide earnings, Dubawi tops the charts this year, with worldwide earnings over $22.6 million, with Galileo second with worldwide earnings over $17.7 million. If we consider just North American and European earnings only, Galileo is tops with the earners of $14.8 million, well clear of Dubawi, with the earners of $10.4 million in NA/EU. That means Dubawi has the winners of over $12 million outside North America and Europe, half of which came from Prince Bishop's win in the G1 Dubai World Cup.

Coolmore's Zoffany was a convincing winner among European first-crop sires. Haras De Bonneval's Siyouni edged Ballylinch's Lope De Vega among European 2015 second-crop sires; and Coolmore's Mastercraftsman was the top European third-crop sire by 2015 progeny earnings, ahead of Gilltown's Sea The Stars. The other real European breakthrough sire in 2015 was Morristown Lattin Stud's Dark Angel, who finished eighth on the European Sire List (NA/EU earnings only), with 14 black-type winners, and was fourth on the European 2-Year-Old Sire List, with five crops racing.