Tapit Filly Runs Away in the Tempted 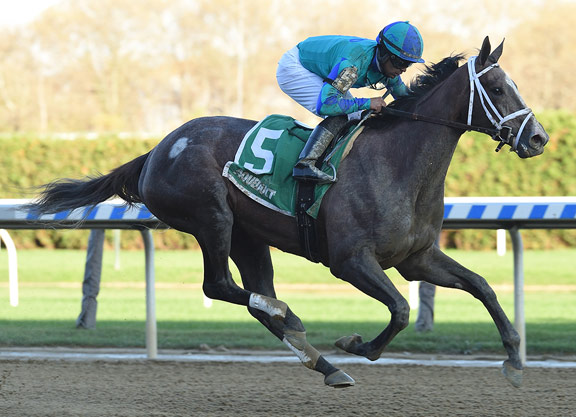 Fourth in her career bow at Belmont Sept. 8, Maedean broke through next out there Oct. 5 and was given a 2-1 chance in this black-type bow. Running two wide, the gray tracked from fourth through a :46.66 half-mile. Ranging up three wide to take on the leaders turning for home, the $450,000 KEESEP purchase struck the front in early stretch and powered clear of her own volition to score by daylight. Power Move was second and Vast crossed the line third, but was disqualified and placed fourth for interference after a claim of foul by the rider of Ankle Monitor, who was promoted to the show spot.

“She had to swing out wide a little bit and she had to do that last time as well,” trainer Mark Hennig said. “This filly has got a lot of talent and I just wanted everything to be kept out of her way. I was confident that she would finish with good energy. I almost passed this race to wait on the [GII] Demoiselle [Dec. 7] because I know she's going to love the distance. She's going to get better going further. If you watch her train in the morning, she just never gets tired. It's encouraging going forward.”

Maedean is the second foal out of GISP Summer Solo, who was purchased by Virginia Kraft Payson's Payson Stud for $700,000 carrying her first foal by Ghostzapper as part of the Sarah Leigh dispersal at the 2016 Keeneland January Sale. The 8-year-old mare has since produced a yearling colt by Medaglia d'Oro and a weanling colt by Candy Ride (Arg). She was bred back to Curlin. The winner's second dam is French stakes winner Summer Solstice (Ire) (Caerleon), who is also responsible for stakes winners Summer Breezing (Langfuhr) and Adirondack Summer (Thunder Gulch). Click for the Equibase.com chart or VIDEO, sponsored by Fasig-Tipton.