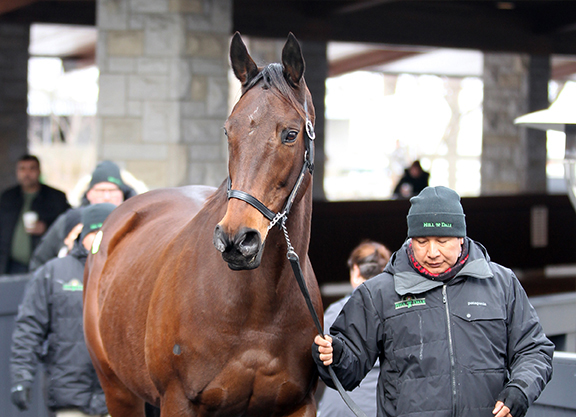 1st-Del Mar, $61,351, Msw, 8-18, 2yo, f, 6f, 1:12.42, ft.
STELLAR SOUND (f, 2, Tapit–Siren Serenade, by Unbridled’s Song), the less-fancied of a pair of Tapit fillies making their respective debuts for Don Alberto Stable, covered all the ground but still fought on gamely late to prevail in Sunday’s opener from Del Mar. Away last and breaking outwardly from her wide draw, the homebred had to be asked for more early by Drayden Van Dyke and soon tugged her way up into third while still far out into the track as fellow Don Alberto colorbearer Matera (Tapit)–a $1.4-million half-sister to Liam’s Map trained by Jerry Hollendorfer and the 3-5 favorite–showed the way. Stellar Sound ranged up to join Matera and pace presser Buyer’s Remorse (Liam’s Map) into a :46.13 half, and Matera soon dropped back as the other two were locked in battle past the quarter pole. Buyer’s Remorse was a stubborn foe, but Stellar Sound got the better of her late to score by a half-length. Matera kept on for third. According to Trakus data, Stellar Sound covered 23 ft. (approx. 2 3/4 lengths) more than the runner-up. Don Alberto paid a sale-topping $1.025 million for dam Siren Serenade at the 2017 Keeneland January sale while she was carrying Stellar Sound. Siren Serenade was already the dam of ‘TDN Rising Star’ and Del Mar debut winner and track record breaker Luminance (Tale of the Cat), GISP, $218,858. She has since produced a Malibu Moon filly earlier this term before being bred back to Tapit. Stellar Sound’s second dam is MGISW Versailles Treaty (Danzig), who also produced GI Breeders’ Cup Juvenile Turf hero George Vancouver (Henrythenavigator) and GSW and GISP Saarland (Unbridled). Lifetime Record: 1-1-0-0, $36,600. Click for the Equibase.com chartor VIDEO, sponsored by Fasig-Tipton.
O-Don Alberto Stable; B-Don Alberto Corporation (KY); T-Bob Baffert.