A Tapit Topper at KEESEP 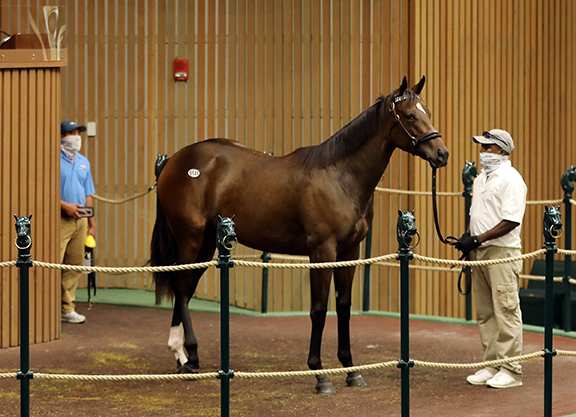 A Tapit filly out of the 2015 GI Alabama S. heroine Embellish the Lace (Super Saver) caught the attention of a number of high-end buyers, and was ultimately landed Sunday by Claiborne Farm's Bernie Sams, who was bidding on behalf of an undisclosed client of the storied nursery. The bay was consigned to the sale by Bluewater Sales as hip 149 and offered on behalf of her breeder, China Horse Club.

“He's bought a couple mares and he bought a nice yearling filly last year,” Sams said of the buyer. “He's trying to buy a couple more fillies and build a broodmare band over the next few years and we will see where we go. He wanted a Tapit filly, so there we go.”

He continued, “She's a pretty filly and very athletic. A nice family out of a young mare that could run. It's a good cross. We had hoped she would be cheaper.”

Bluewater's Meg Levy said hip 149 had been plenty popular back at the barn and in the repository.

“It's a strange year, 2020, and this was the first horse we were bringing to the ring in Book 1. So, while we expected that she could be in that range, you just never know,” Levy offered. “It seemed like all the right people were on her. She's been nothing but a queen, and she put all the pieces together. The market is increasingly physically demanding and there were just no holes. She had the page and the physical. She was vetted about 14 times, and it seemed like everyone showed up, so fair value.”

Embellish the Lace was a $320,000 buy here in 2013 by Alex and JoAnn Lieblong. The half-sister to 2010 GI Travers S. Winner Afleet Express (Afleet Alex) RNA'd for $1.9 million at the 2015 Fasig-Tipton November sale and brought $2.4 million from China Horse Club a year later while in foal to Uncle Mo. Her now 2-year-old filly Classique (Pioneerof the Nile) was a $700,000 Fasig-Tipton Saratoga grad of last year, and Embellish the Lace produced a filly by red-hot Into Mischief this term.

While China Horse Club founder and chairman Teo Ah Khing was unable to travel to Kentucky due to the coronavirus pandemic, he stayed up until 4:00 a.m. local time to watch hip 149 sell from his home in Singapore.

“We couldn't be more pleased with this result,” he said. “The mare is class. She's putting down beautiful stock, just what we hoped for when purchasing her. She was well raised by both WinStar and Bluewater and it's a privilege to offer fillies like her, although always sad to see them go.”

As for the market dynamics in these uncertain times, the international businessman said, “It's about keeping confidence in the market. You can't look at the micro. It's a long-term view and it's about keeping conviction in the industry. These times will pass—it's a matter of just getting on with it under the environment we face. We aren't immune, but we are doing a great job under the conditions.”