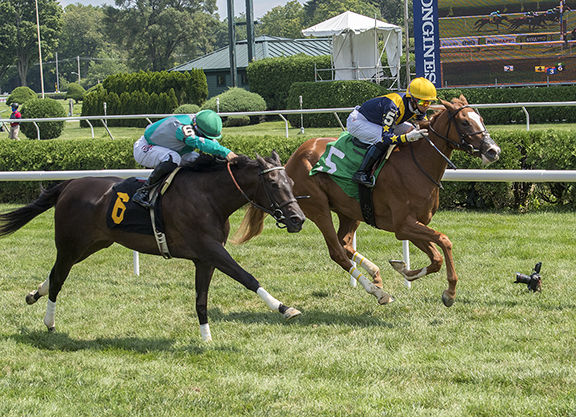 2nd-Saratoga, $72,000, Msw, 8-9, 2yo, f, 1 1/16mT, 1:44.94, fm.
SEASONS (f, 2, Tapit–Winter Memories {MGISW, $1,268,100}, by El Prado {Ire}) got the job done in her much-anticipated first start Sunday, but not without plenty of drama. The regally bred filly showed a very upbeat worktab leading up to this unveiling, punctuated by a :48.79 bullet over the Oklahoma turf Aug. 3 (XBTV Video), and was backed down to 4-5 from an already telling 9-5 morning line prediction. Away in good order, the chestnut took up a stalking spot along the fence as second timer Frankel At Ascot (Fr) (Frankel {GB}) showed the way through poky fractions. Seasons looked like she might run into traffic trouble as the field bunched up turning for home, but she pushed her way through a seam outside of the pacesetter in midstretch. Just as she was striking the front, Frankel At Ascot veered in abruptly, broke through the temporary rail and lost rider Tyler Gaffalione. Still with her mind on business, Seasons boxed on to fend off longshot Ice Queen (Cairo Prince) by a neck. Both Frankel At Ascot and Gaffalione reportedly escaped serious injury. The winner is a full to Winter Sunset, MSW & MGSP, $248,873. Her uber talented dam was a debut winner here in 2010 and concluded her career with a victory in the local GI Diana S. two years later for Darby Dan's Phillips Racing Partnership and trainer Jimmy Toner. Winter Memories, herselfa daughter of MGSW Memories of Silver (Silver Hawk), produced a Union Rags colt in 2019 and a Quality Road filly earlier this term before being bred back to American Pharoah. Lifetime Record: 1-1-0-0, $39,600. Click for the Equibase.com chart or VIDEO, sponsored by Fasig-Tipton.
O-LNJ Foxwoods and Phillips Racing Partnership; B-Phillips Racing Partnership (KY); T-James J. Toner.