Tanquerray Another Timely Acquisition for Nicks 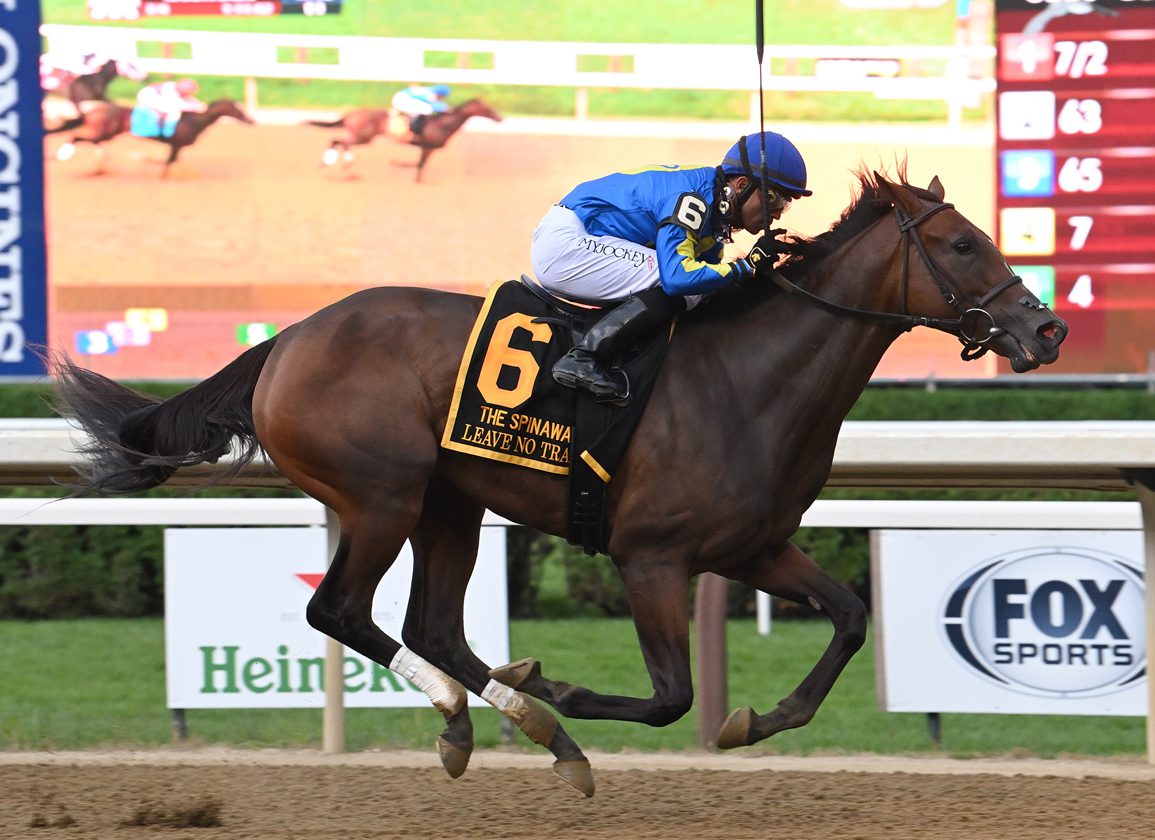 Indiana horseman William Austin Nicks, who improbably acquired the dam of Rich Strike just days before that colt won the GI Kentucky Derby in May, scored another dam of a future Grade I winner on a shoestring budget when he purchased Tanquerray (Good Journey), in foal to Outwork, for $2,000 at the 2021 Fasig-Tipton February sale. The mare was followed into the sales ring at that auction by her yearling filly by Outwork, who sold for $8,000. Reoffered at Fasig-Tipton Midlantic in October, the yearling brought $40,000. Now named Leave No Trace, the filly won this year's GI Spinaway S. and was recently third in the GI Frizette S. With that major league update in tow, Nicks, along with partners Randy Klopp and Roger Speiss, will send the Grade I winner's yearling full-sister through the ring at next week's Fasig-Tipton Kentucky October Yearlings Sale as hip 231 with the Taylor Made Sales Agency consignment.

Nicks admits he deals in the lower-end of the mare market and was succinct about Tanquerray's appeal last February.

“She looked cheap,” Nicks said of the now 13-year-old mare. “I am not going to tell you I knew she was going to throw a Grade I winner, because nobody did. But she looked cheap. She had one foal to race, Unconquered Lea (Lea). He made $40,000 and had good speed index numbers, an allowance-type horse. She was a big, good-looking chestnut mare. And in foal to Outwork, he was standing for $10,000 or $7,500 or whatever, and I bought the mare for $2,000, so why wouldn't you buy her?”

Asked if he had seen the mare's future Grade I winner at the sale, Nicks said, “I didn't even look at her. I pretty much just mess with mares. I buy and sell and foal several out myself. I kind of do whatever I can do to make money in this business because it's hard. But I don't mess with a lot of yearlings.”

Nicks quickly added a partner on the mare.

“I texted Randy [Haffner] and I said, 'Man, I stole this mare,'” Nicks recalled. “And he looked at her and we made a deal on her. We both split her and that way we can split the Indiana breeders awards on the filly. That was part of our deal. So we both bred her. He had her and he bred the mare back to his stallion, Notional, and had a colt this spring and had her back to Notional on a pretty early cover.”

As Leave No Trace won her debut at Saratoga in July and with Notional's imminent departure for Ohio, Haffner was looking to downsize.

“After the filly won first time out at Saratoga is when we decided to buy her,” Nicks said. “[Haffner] was selling quite a few horses trying to downsize. I mentioned something to him about buying her and sticking her in this sale before the filly won the race and he just wanted to sell her privately. So Randy Klopp, who trains some horses for me, and Roger Speiss, who has a bunch of horses with Randy, and I ended up just buying five off of Randy to cheapen the average, so to speak.”

The partners originally intended to race the five yearlings, but Leave No Trace's victory in the Sept. 4 GI Spinaway S. changed those plans.

“We bought her to race,” Nicks said. “The only reason we entertained the idea of selling her was because of Leave No Trace. Since she won, we figured it would be a good time to stick her in the sale and if we can get her sold, we'd love to, and if she doesn't bring what we are hoping for, we will bring her back and run her.”

Nicks is optimistic heading into the October sale with a yearling with an impeccable update.

“She is doing really good,” he said of the yearling. “We scoped her and we did her X-rays and everything was perfect. She is a really tall filly. So she's kind of in the middle of a growth spurt right now and growing up rather than growing out like we'd like to see her. So she's a real tall filly with a lot of range. But I think she'll be just fine. She'll fit in with everything else down there, I think.”

“That was just kind of a crazy deal,” Nicks admitted with a laugh. “I deal with the bottom-tier Thoroughbred mares and M.C. Roberts had that mare and he tried getting her in foal for a couple of years and he didn't have any luck. He called me one day the week before the Derby and he told me, 'This mare had a 2-year-old who won by a huge margin for $30,000 last year at Churchill.' And that's all he said. The horse was Grade III-placed at Turfway, so he had some black-type, but all [Roberts] told me was that this horse had won by a bunch at Churchill last year.”

He continued, “I deal with a lot of those older mares that are hard to get in foal. I've got people who will pasture breed them or they will cross them on Quarter Horses where they can do AI. So your older Thoroughbred mares that people don't really want to mess with because they are hard to get in foal, there are Quarter Horse people who can AI and race out of them. They will try them. That's why I got her. Then I found out who he was talking about. It was a shock.”

Rich Strike famously drew into the Derby field the day before the race and Nicks recalled, “He was 21 or 22 and I said, 'He'll never get in.' And then he wins the damn thing. It was just crazy.”

The 20-year-old Gold Strike has not produced a foal since Rich Strike, but Nicks is hopeful next year will be the charm.

“We bred her to Munnings May 25 and we checked her in foal day 16 and everything looked good,” Nicks said. “We checked her back day 21 and it was gone. I think it was just too hot–the first two weeks of June this year, there was a heat index of 120. We are going to try again, hopefully in February. We will get her under lights early next year. The vet who looked at her was very hopeful.”

The 27-year-old Nicks, who followed his father into the horse business, leases a farm in Sellersburg, Indiana and has been breeding horses since he was in high school.

“[Dad] trained for 10 years,” Nicks said. “And then he quit training and we started leasing a big farm and I started foaling mares out for people. I went through some stallions and breeding my own. Then I'd go to Keeneland and buy cheap mares for $1,000 or $2,000, bring them home, take pictures of them and stick them on my Facebook page and sell them for a profit. And whatever I didn't sell, I'd keep and foal out and make registered Indiana-breds. My dad started leasing the farm when I was a sophomore in high school. I would leave school early when I was a junior and take a mare to Lexington to get bred. That's all I've done. I've never had a job.”

Nicks and partners will offer Leave No Trace's full-sister during next Monday's first session of the Fasig-Tipton October sale. The auction continues through Thursday with bidding beginning each day at 10 a.m.