Tamayuz Colt In Command At Chantilly 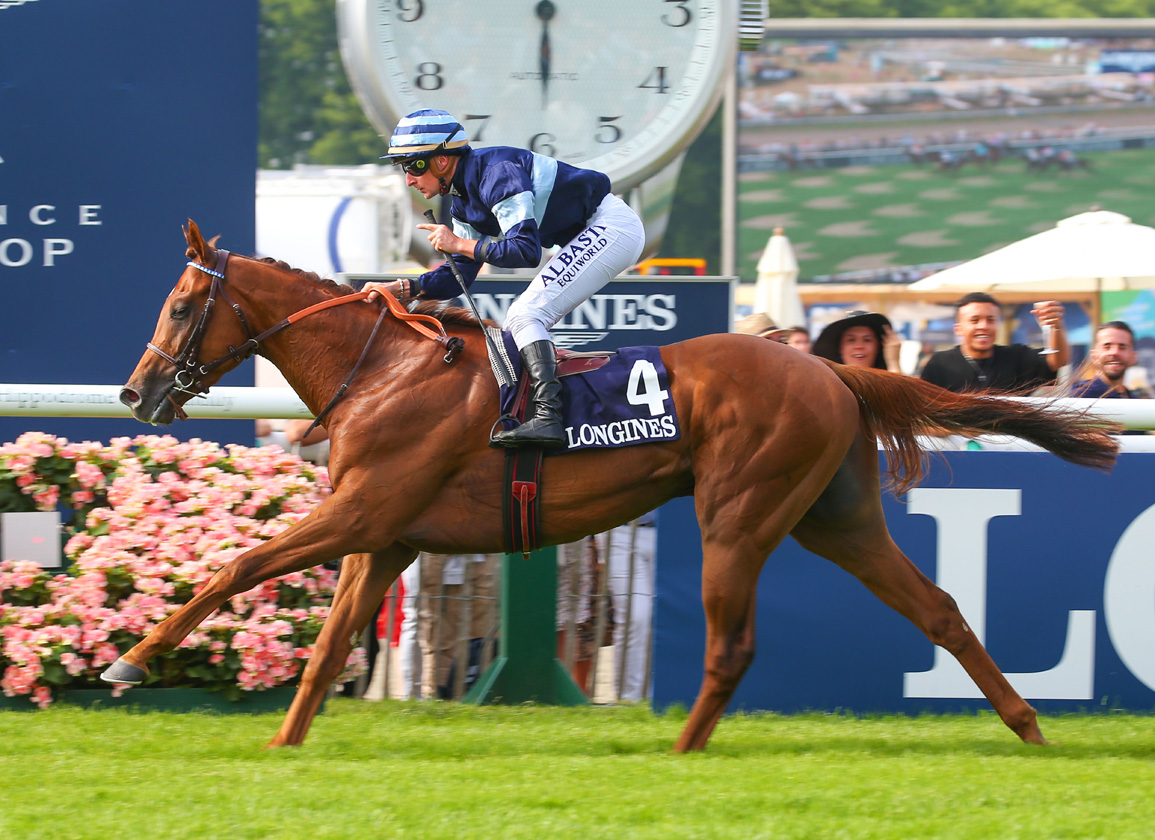 Having witnessed their filly Rosacea (Ire) (Soldier Hollow {GB}) overcoming a horror draw to be third in the G1 Prix de Diane, Haras de la Perelle and Stephane Wattel's Sunday at Chantilly got even better as Simca Mille (Ire) (Tamayuz {GB}) recorded an authoritative success in the G3 Prix du Lys Longines. Off the mark at the fifth attempt in a 9 1/2-furlong handicap on the Polytrack here Apr. 20, the chestnut had bounded to a straightforward win over another two furlongs at Angers at the end of last month and was awarded due respect as the 3-1 second favourite for this Grand Prix de Paris prep. Allowed ample breathing room on the front end from the outset under Theo Bachelot, the homebred was in complete control in early straight and settled the outcome with a 11.32 split from the two to the one. Maintaining to the line, he had 3 1/2 lengths to spare over Virtual Rock (Ire) (Fascinating Rock {Ire}), with the 17-10 favourite Martel (Ire) (Frankel {GB}) a neck behind in third having been asked too big a question.

“This horse has a unique blend of speed and stamina,” Wattel said. “He had won easily in the provinces, but it was hard to imagine that he could be as impressive as he has been in that race. He has improved and, while he is not in the [July 14 G1] Grand Prix de Paris, in the light of this performance it would be the logical next step so we will most definitely consider supplementing.”

Simca Mille is the first foal out of Swertia (GB) (Pivotal {GB}), a daughter of The Aga Khan's Sanjida (Ire) (Polish Precedent) who was black-type-placed on six occasions including when third in the G3 Prix Penelope and G3 Prix Cleopatre. She is in turn kin to three black-type winners headed by Sarafina (Fr) (Refuse To Bend {Ire}), who captured this card's feature Prix de Diane in 2010 having won the G1 Prix Saint-Alary and was later crowned European champion 3-year-old filly. She went on to produce the G3 Prix d'Aumale scorer Savarin (Jpn) (Deep Impact {Jpn}) and her G3 Prix Messidor-winning full-brother Geniale (Jpn). Sarafina's half-sister Sanaya (Ire) (Barathea {Ire}) was second in the Saint-Alary, while this is also the family of Sumayr (Ire) (Ela-Mana-Mou {Ire}) who captured the Grand Prix de Paris in its old guise as a 15-furlong contest in 1985. Swertia has the unraced 2-year-old filly Sadia (Ire) (Kodiac {GB}) and a yearling filly by Invincible Spirit (Ire).