Taking Stock: The Art of the Mating 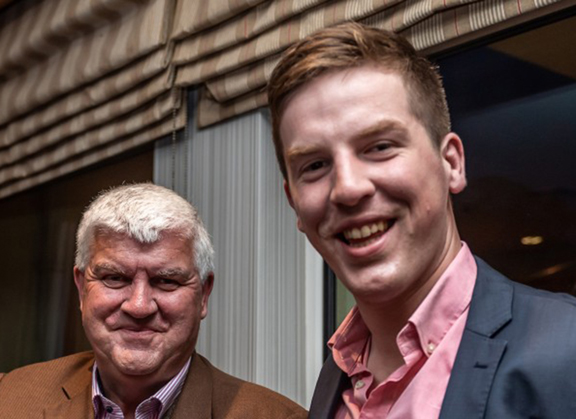 Responding to the global coronavirus pandemic, people and organizations within this industry from around the world have stepped up to generate goodwill gestures every week it seems, whether it's owner-breeder Chuck Fipke offering no-fee breedings to his stallions, Finger Lakes HBPA and track management distributing $827,000 in the form of “stimulus checks” to local trainers and owners, or an Irish lawyer galvanizing interest in more than 350 housebound fans and industry participants in “The Art of the Mating,” a hypothetical exercise in stallion selection for some famous mares.

Jack Cantillon came up with the idea for “The Art of the Mating” while on Twitter recently, and I happened to see it germinate and come alive in real time with amazing response. Cantillon is a London-based attorney who is involved in the racing and breeding business and is the son of longtime breeders Dermot Cantillon and Meta Osborne, owners of the 215-acre nursery Tinnakill House in County Laois, Ireland, which has produced Group 1 winners Alexander Goldrun (Ire), Red Evie (Ire), and Casamento (Ire) among other talented racehorses.

I met Cantillon, along with his parents and sisters, three years ago over dinner at a lobster shack in an area of Brooklyn by the water called Red Hook, close to where his family was vacationing in a nearby rental. If my memory is correct, the young lawyer was then working as an intern in Washington D.C., but his exuberance for the sport was well evident. He's since written at least 10 earnest Op/Ed pieces in TDN, including one particularly creative piece on Mar. 23 titled “Creating Demand During and After the COVID-19 Pandemic,” which I highly recommend to anyone involved in breeding, buying, and selling.

Cantillon is also involved as a syndicator of racehorses at his syndicates.racing and plays a part with his parents in the operation of Tinnakill House, a consignor to major sales.

The Art of the Mating

As for “The Art of the Mating,” here's Kelsey Riley's description in TDN of Cantillon's spur-of-the moment idea: “Over a four-week period, 'students' who sign up for The Art of the Mating will try their hand at designing matings and receive expert feedback through a Zoom video conference. Cantillon will select the mares and provide information on and photos of the mares on a website that is currently in the works. The participants will submit their work and questions for the expert panel, which Cantillon will record on Zoom and post online and as a podcast. Cantillon had 388 participants register overnight on Monday within 24 hours of posting the sign-up portal, and he has signed Moyglare Stud's Fiona Craig on as one of his experts for week one. Students will start off with the blue chip broodmare band of Enable (GB) (Nathaniel {Ire}), Deirdre (Jpn) (Harbinger {GB}) and Midnight Bisou (Midnight Lute).”

I watched the Zoom presentation on the segment on Juddmonte-bred Enable, which was informative. Aside from Craig, the other expert commenting on Enable was Alan Porter, and both did a fine job of discussing the champion's pedigree, which includes the unusually close inbreeding to Sadler's Wells 3×2. Both experts noted that such close duplications to sires aren't statistically successful, though occasionally found in high-class runners, and Porter used Marcel Boussac's Coronation (Fr) (Djebel {Fr}), who was 2×2 to Tourbillon (FR), as another example. Both experts, however, stayed away in their selections from stallions with another strain of Sadler's Wells in their pedigrees.

This, of course, ruled out a number of European horses– including Juddmonte star Frankel (GB) (Galileo {Ire}). As it is, mates for a mare of the quality of Enable are limited, because only stallions at the highest echelons would normally be considered by most breeders and they are few in numbers. Craig chose Juddmonte's rising star Kingman (GB) (Invincible Spirit {Ire}), while Porter went with the safer play of Dubawi (Ire) (Dubai Millennium {GB}). The online participants voted for Dubawi as well.

Both are good matings based on good crosses and are safe commercially in preservation of top-end value, but neither is particularly interesting after that, and not close to being as daring as the one that created Enable herself with the 3×2 inbreeding to Sadler's Wells. Juddmonte, however, has done this type of thing before, and superstar sire Danehill (Danzig) was another example of this, except the duplicated ancestor in his pedigree was a mare. He was inbred 3×3 to Natalma (Native Dancer)–the dam of Northern Dancer.

The concept of inbreeding to superior females, as seen in the case of Danehill, is known in some circles as the Rasmussen Factor after Jack Werk, founder of Werk Thoroughbred Consultants (WTC), coined the term in honor of our mutual friend Leon Rasmussen, the great pedigree authority who penned the “Bloodlines” column for DRF and wrote frequently on the topic.

Rasmussen put his observations to practical use in the early-to-mid 1980s when top breeder John Nerud solicited his advice for matings to Nerud's Fappiano (Mr. Prospector), who was then standing in Florida at Tartan Farms, which Nerud managed. Leon suggested that Nerud inbreed to some of Tartan's top foundation mares that were in Fappiano's pedigree, notably Aspidistra, the dam of Dr. Fager and Ta Wee; and Cequillo, the third dam of Fappiano.

This advice resulted in the Tartan-bred Fappiano horses Quiet American (4×3 Cequillo and 3×2 Dr. Fager) and Unbridled (4×4 Aspidistra and 4×5 Rough'n Tumble). Both of these pedigrees, along with Danehill's, follow a similar and specific form of inbreeding to the superior female in question. In each case, the female that's duplicated is in direct descent to the horse through the tail-female line. In other words, Natalma is Danehill's third dam; Cequillo is Quiet American's third dam; and Aspidistra is Unbridled's fourth dam. This, Rasmussen had observed, was the preferred method of inbreeding to females.

Rasmussen, however, had observed that some successful breeders had refined this process even more, by breeding mares from the same family to sires from the same family–which means that the duplicated female ancestor would be in the tail-female lineage of both sire and dam. This isn't the case with Danehill or Unbridled, but it is true for Quiet American, whose dam and sire trace directly to Cequillo.

Chuck Fipke, a client of WTC, has a similar approach to matings. He meticulously composes pairings that will incorporate parts of this philosophy, and his matings are planned with another generation in mind, too, because he and others, including Rasmussen, had observed that inbred ancestors frequently show up in the pedigrees of successful sires or dams.

For example, Fipke sent homebred Awesome Gal (Ire) (Galileo {Ire}) to the Cantillons' Tinnakill House last year so she could be bred to Invincible Spirit, who stands at the nearby Irish National Stud. Fipke had planned Awesome Gal's own pedigree to be 3×3 to blue hen Allegretta (GB)–who is the second dam of Galileo and the third dam of Awesome Gal–and then he sent Awesome Gal to a stallion without any inbreeding within four generations–Invincible Spirit–who, incidentally, has done well with both Galileo and Allegretta. (Leon referred to this type of mating of breeding an inbred mare to an outcross sire as creating “hybrid vigor.”)

The Invincible Spirit/Galileo cross, by the way, is what Fiona Craig had liked for Enable with Kingman, but both Invincible Spirit and his son Kingman have done well, too, with mares by King's Best–who was out of Allegretta–suggesting that Allegretta herself is as much the decider as her sons. In fact, Allegretta's daughter Urban Sea–the dam of Galileo and Sea the Stars (Ire) (Cape Cross {Ire})–produced black-type winner Born to Sea to the cover of Invincible Spirit.

Awesome Gal, with two close doses of Allegretta, recently foaled an Invincible Spirit filly for Fipke on Apr. 4 in France, and she will visit Invincible Spirit again this year. In fact, she's due to leave for Tinnakill House any day now.

The spirit of group participation that Cantillon synthesized for this exercise during this pandemic reminded me of another time and place when I'd done something like this to engage people in a mating back when I was the bloodstock editor of DRF. George Rowand, the breeder of Grade l winner Miss Josh, had asked me who I'd choose to breed her dam for the 1995 season. Rowand recounted this in his book, “Diary of a Dream: My Journey in Thoroughbred Racing,” and I'll let him describe the event in his words:

“In 1994 I asked Sid Fernando, the breeding editor of Daily Racing Form, whom he would breed to Highland Mills, and he opened the question to readers. They printed fifty-eight responses, from all the well-respected pedigree experts in the world, as well as from casual racing fans. I was astonished. I had trouble believing that all those people would take the time to think about our mare, look at her pedigree, think about stallions, and write letters to the Form expressing their opinions.”

What Rowand found then, and what we're seeing now with Cantillon's exercise, is the interest people have in the pedigrees of horses and the vicarious thrills hypothetical matings provide. Like handicapping a race, constructing a mating to produce a racehorse is a puzzle that requires intellect, but it's a lesson we sometimes forget in this business when a mating is planned for the sales ring instead of the racetrack. Perhaps now is a good time to reflect on the art of the mating, instead of the art of the sales ring.