Taking Stock: Maclean's Music is the Model for Valiant Minister 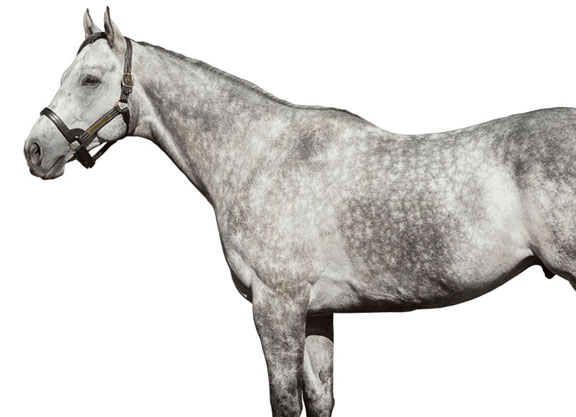 Last week, I stopped by John and Leslie Malone's 2,200-acre Bridlewood Farm in Ocala before attending the OBS June sale and got a good look at an intriguing freshman sire who'd topped the June sale six years earlier at a then-record price of $680,000. By Candy Ride (Arg) from the unraced Deputy Minister mare Spooky Minister, Valiant Minister was bred by John Sikura's Hill 'n' Dale and had breezed a bullet eighth in :9 4/5 for consignor Eddie Woods. He was purchased on the advice of Donato Lanni by Charles and Susan Chu, who race as Baoma Corp., with Bob Baffert, and he's an eyeful. Standing about 17 hands, Valiant Minister is an imposing horse with plenty of athleticism to go with his size and substance. That he's a rare gray for his sire like Grade l winner Leofric, who is in his second year at Rockridge Stud in New York, adds to his attraction.

“I wasn't really interested in standing him at first, until I saw him get off the van,” said George Isaacs, longtime manager of Bridlewood for Arthur Appleton and his family before the Malones bought the showcase property in 2013. “I'd told Mrs. Chu not to send him, but she did anyway, and when he stepped off that van, he was impressive. He stands out.”

Isaacs is a tall and lanky figure in his early 60s who sports a ubiquitous baseball cap and a short-cropped beard and tells it like it is, politely but with no holds barred. And he's no one's fool. An accomplished horseman with a record of success in Florida, Isaacs has a keen sense of Ocala breeding history, and he knows how to run a business. The moment he saw the horse in front of him, he knew he'd have to take a shot with him.

“I called Eddie Woods and asked him if he remembered the colt,” Isaacs said. “Eddie told me he was the fastest 2-year-old he'd ever had. And with the horses Eddie's had through the years, that said a lot.”

Isaacs's initial reticence stemmed from Valiant Minister's race record. He'd raced only once, at four. Susan Chu entered the business nine years ago with Lanni picking her stock, racing Grade l-placed Grade lll winners Super Ninety Nine (Pulpit) and Chitu (Henny Hughes) under her Tanma Corp. banner with Baffert in 2013 and 2014 before husband Charles came aboard and they became Baoma Corp. Valiant Minister and Drefong (Gio Ponti), both 2-year-olds of 2015, were part of the couple's new joint venture, and the success certainly continued with the latter, who won the Gl Breeders' Cup Sprint at Santa Anita in 2016–the season he was named champion sprinter–and the Gl Forego S. at Saratoga the following year.

Valiant Minister got hurt shortly after he sold at OBS June and didn't make it to the races until January of 2017, missing his entire 2-year-old and 3-year-old seasons. However, he made the most of his lone start, winning a Santa Anita maiden special wire-to-wire in 1:08.84 by 2 1/4 lengths from a stablemate, Baoma's Lord Simba, who won a Grade lll race a few months later to validate the class of Valiant Minister–who'd earned an excellent Ragozin speed figure as it was for his winning effort. Valiant Minister was subsequently injured in a stall accident and never raced again.

“When I saw that monster performance on tape, I knew he had all sorts of ability, but hearing about him from Eddie and seeing the horse in front of me convinced me pretty quickly,” said Isaacs.

Isaacs had developed a relationship with the Chus over the last few years, initially standing Chitu at Bridlewood after Barry Eisaman had recommended Isaacs to the couple for their initial foray into the breeding side of the game.

“Charles and Susan Chu are a dynamic couple who want to do things the right way. They love their horses, they have the capital behind them, and they are committed to quality, which is our philosophy at Bridlewood,” Isaacs said.

The couple had sold Drefong to Japan, where the stallion was recently represented by his first winner, and after supporting Chitu for several years are now focused on making Valiant Minister. Their burgeoning broodmare band boards at Bridlewood, which otherwise exclusively houses the Malones's high-grade commercial breeding stock. The farm, with an excellent dirt and turf course plus an uphill Tapeta gallop modeled after those in Europe, does have a separate training division under farm trainer Meda Murphy that prepares client 2-year-olds, and graduates of the program include such Grade l winners as Gun Runner, Tapwrit, Catholic Boy and Maxfield, among others.

Standing stallions at Bridlewood, where Skip Trial (Bailjumper) and Put It Back (Honour and Glory) once served mares and where Hill 'n' Dale stalwart Stormy Atlantic (Storm Cat) was foaled, raised, and initially entered stud, wasn't a part of Isaacs's business plan for the Malones, but with the Chus committing about 30 mares to support their own studs, he'd decided to venture back into the stallion business primarily for them.

As a student of the game, Isaacs is aware that it's a longshot to make any stallion, much less a lightly raced one that never won a black-type race, but Isaacs has also seen these types of horses succeed in Florida dating back to the middle of the last century when the commercial breeding industry in Ocala began. The most recent notable example is Journeyman Stud's Khozan (Distorted Humor), a winner of both of his starts. Any Florida list would also include the prolific 2-year-old sire An Eldorado (Vaguely Noble {Ire}), unplaced in one start, from the 1980s; Big Burn (Never Bend), unplaced in three starts, from the 1970s; and unraced West Acre (Forty Niner) from the beginning of this century, among quite a few others. And I'm not including here horses like Sovereign Dancer (Northern Dancer) and Crafty Prospector (Mr. Prospector), who weren't stakes winners but were graded-placed when they began their careers in Florida before moving on to Kentucky, or early Florida stallions like Beau Gar, a non-stakes winner of 15 starts who sired Beau Purple, who thrice defeated the great Kelso, and Handsome Boy, who beat Buckpasser, in the 1960s. Beau Gar also sired the dam of Onion, who conquered Secretariat in the 1970s.

Claiborne's Danzig (Northern Dancer), an undefeated winner of three starts, is the outstanding example of a non-stakes winner in Kentucky, but Claiborne had previously stood Drone (Sir Gaylord), an undefeated winner of four starts but no stakes, and stakes-placed Nantallah (Nasrullah), and the iconic farm currently stands Flatter (A.P. Indy), who didn't win a black-type race while taking four of six starts, but did place in a graded race, like Sovereign Dancer and Crafty Prospector.

The recently deceased Malibu Moon (A.P. Indy), a cornerstone for Spendthrift under B. Wayne Hughes, only made two starts, winning once, and Maclean's Music (Distorted Humor), who stands at Hill 'n' Dale and is currently represented by Grade l winners Drain the Clock and Jackie's Warrior–one-two in the recent Gl Woody Stephens–won his only start, and it, too, was a “wow” outing like Valiant Minister's.

Aside from their lone races, Maclean's Music and Valiant Minister are linked by Sikura, who stands the former, bred the latter, and began the career of Valiant Minister's sire Candy Ride, whose sons at stud in Kentucky were profiled in this space two weeks ago. Sikura's belief in Maclean's Music was vindicated off the bat when the horse got Gl Preakness S. winner Cloud Computing from his first crop and then followed up with Grade l winner Complexity from his third crop before his most recent duo, members of his fifth crop, and his success is the model that Isaacs hopes to follow with Valiant Minister.

To date, Valiant Minister is represented by only one starter, Signora Minister, who was second in a Santa Anita maiden special in her debut two weeks ago. The filly was an OBS March $25,000 sale, which is reasonable for a $3,000 stallion like her sire, but Valiant Minister has some bigger guns in the pipeline, including a filly and a colt that breezed well and made $360,000 and $350,000, respectively, at OBS April–eye-opening prices. Both were bred by Baoma Corp., which also bred a Valiant Minister yearling filly that made $120,000 at OBS October.

To make a horse like Valiant Minister, it takes heavy owner participation plus savvy management, which the Chus and Isaacs are providing. In fact, Isaacs said that this spring Baoma bred all of its mares at Bridlewood to Valiant Minister to shore up his difficult fourth year at stud, which is one heck of a gamble, but one that's admirable, too. Not many would do it.

We're about to see if it pays off over the second half of the year.