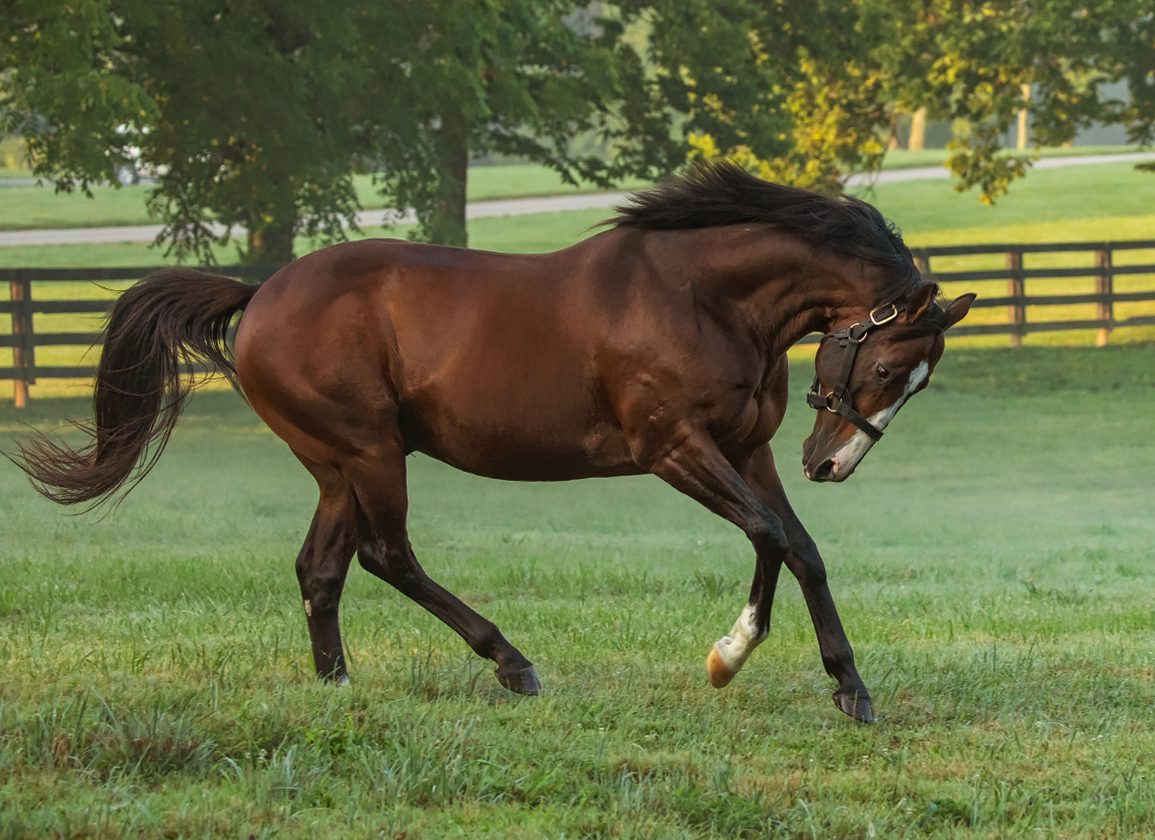 When it comes to “sire-making races,” the Gl Metropolitan H. is usually the first that's thrown into the conversation. Quality Road, the 2010 winner, is the most notable recent example, and before him it was Ghostzapper in 2005, but that's about it for the past 20 years despite the race's vaunted reputation. The Gl Florida Derby is a better recent gauge for making stallions: Nyquist (won in 2016), Constitution (2014), Dialed In (2011), Quality Road (2009), Scat Daddy (2007), Empire Maker (2003), and Harlan's Holiday (2002) are a stronger group than the Met Mile winners since 2002.

Into Mischief stands at Spendthrift for $250,000 live foal and has led the general sire list each year since 2019, and this will be his fourth consecutive year doing so.

The Spendthrift kingpin's lone Grade l win came in the CashCall Futurity at Hollywood Park in 2007. The race is now called the Los Alamitos Futurity and is a Grade ll event. It will be contested on Dec. 17 during the six-day Winter Thoroughbred Meet at Los Alamitos, which begins this weekend and features the Gl Starlet S. for juvenile fillies Saturday. Both races could have an impact on the leading freshman sire race.

Among colts, Justify's (Scat Daddy) promising son Arabian Lion is being targeted for the Futurity. At the moment, Hill 'n' Dale's Good Magic (Curlin), who sired Gll Remsen S. winner Dubyahnell Saturday; Spendthrift's Bolt d'Oro (Medaglia d'Oro), the sire of Gll Kentucky Jockey Club S. winner Instant Coffee the Saturday before; and Justify are in a heated three-way battle for the championship. Each has at least one colt for the Classics preps so far–Justify's Champions Dream won the Glll Nashua S. on Nov. 6, and before that, Good Magic's Blazing Sevens won the Gl Champagne S. Oct. 1–but the standout division leader is three-time Grade l winner Forte, who will be named champion juvenile colt of 2022.

Forte is by Hill 'n' Dale's Violence (Medaglia d'Oro), who also won the Gl CashCall Futurity, in 2012. Like Into Mischief, the race was Violence's only top-level win. Those two alone could give the CashCall Futurity some clout as sire-making race, but there's more.

The race was called the CashCall Futurity for seven years at Hollywood, from 2007 to 2013, and two other winners of it with subsequent stallion bona fides were the now-deceased Pioneerof the Nile (won in 2008), who stood at WinStar, and Coolmore America's Lookin At Lucky (2009). Into Mischief, Pioneerof the Nile, and Lookin At Lucky each has a Gl Kentucky Derby winner: Authentic, Triple Crown winner American Pharoah, and Country House, respectively. It's four if Mandaloun is thrown in for Into Mischief. That's four of the last eight winners of North America's most prestigious race – quite the haul, isn't it? Will Forte make it five of nine?

If all of this wasn't surprising enough, recall that the CashCall Futurity was contested on a synthetic surface at Hollywood. In retrospect, the facts belie the longstanding hypothesis held at the time by many in the business that all-weather racing would lead to the ruin of dirt sires, which Into Mischief, Pioneerof the Nile, Lookin At Lucky, and Violence decidedly are. And, no slight to the others, Into Mischief is an iconic stallion who inhabits another sphere altogether.

Into Mischief also happens to be the only one of these four CashCall Futurity winners to race entirely on all-weather. Trained by Richard Mandella for B. Wayne Hughes, Into Mischief won three of six starts and was second in each of his other three starts, earning $597,080.

Pioneerof the Nile, a son of Empire Maker, raced on dirt and turf as well as all-weather, winning a Saratoga maiden special at two on turf in his second start for Bill Mott. In his next start in the Gl Lane's End Breeders' Futurity at Keeneland on all-weather, Pioneerof the Nile was third. After that, he was fifth in the Gl Breeders' Cup Juvenile at Oak Tree's all-weather Santa Anita meet, and then he was switched by owner Zayat Stable from Mott to Bob Baffert and kept in training in California.

For Baffert, Pioneerof the Nile next won the CashCall Futurity. The colt began his 3-year-old season with three consecutive wins at Santa Anita in the Gll Robert B. Lewis, the Gll San Felipe, and the Gl Santa Anita Derby. He made his first start on dirt in the Derby, finishing second to Mine That Bird. After an 11th-place finish in the Gl Preakness, Pioneerof the Nile was retired with a record of five wins from 10 starts and $1.6 million in earnings. All of his stakes wins were on synthetic surfaces at either Hollywood or Santa Anita. Before his premature death at age 13, Pioneerof the Nile stood for $110,000 at WinStar.

Baffert also trained Lookin At Lucky, a champion at two and three for owners Mike Pegram, Karl Watson, and Paul Weitman. Lookin At Lucky, by Smart Strike, won five of six starts at two, all on all-weather, including the Gl Del Mar Futurity in addition to the CashCall Futurity at the highest level. Unlike Into Mischief and Pioneerof the Nile, Lookin At Lucky also won on dirt, including two Grade l races, the Preakness and the Haskell Invitational. Altogether, the colt won nine of 13 starts and earned $3.3 million before entering stud at Coolmore America, where he's still a productive stallion standing for a bargain fee of $10,000. In Chile, where he has shuttled through the years, he has an exceptional record of Group 1 success.

Todd Pletcher trains Forte and also trained his sire, Violence, who ran for Black Rock Stables. Like Lookin At Lucky, Violence won on dirt as well. The Medaglia d'Oro colt won a maiden special at Saratoga in his first start and followed up with a win in the Gll Nashua at Aqueduct before crossing the country for the CashCall Futurity. He made only more start after that, a second-place finish in the Gll Fountain of Youth at Gulfstream and was retired with a record of three wins from four starts and $623,000 in earnings.

Like Into Mischief, the CashCall Futurity was his lone win at top level. Violence will stand for $50,000 next year, up from $25,000 this year, and in Forte he has a legitimate Triple Crown contender and his first champion. Before Forte, who won the the Gl Hopeful at Saratoga and the Gl Breeders' Futurity at Keeneland in the lead-up to nailing the juvenile championship with an impressive upset of previously undefeated Cave Rock in the Breeders' Cup Juvenile, Violence was mostly known for three Grade 1-winning sprinters, Dr. Schivel, No Parole, and Volatile.

Forte has elevated Violence's profile into the Classics realm, and if the colt continues to progress and lands the Derby, he'll put Violence into an elite club of CashCall Futurity winners who have sired Derby winners. But even if Forte doesn't win the Derby, these four stallions have put the CashCall Futurity up there with other races that are more frequently associated as sire makers.