Taking Stock: Lord Kanaloa Up Next in Japan 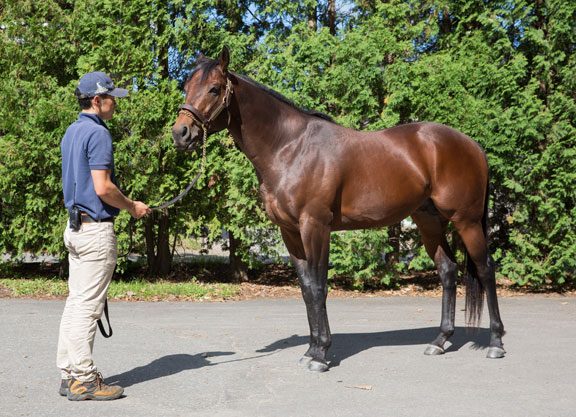 It’s not often at my day job at Werk Thoroughbred Consultants that we get the opportunity to recommend foreign-based stallions to North American-based breeders, for the obvious reason that most breeders here aren’t in the habit of shipping mares abroad to be bred. And if and when we do, the horse is usually in Europe. This spring, however, we did recommend the Japanese-based Lord Kanaloa (Jpn) (King Kamehameha {Jpn}, by Kingmambo) to a client, and here’s why: with his oldest runners only four in 2019, he’s giving strong signals that he’s the next budding superstar sire in his part of the world and following the path of internationally recognized standout Deep Impact (Jpn) (Sunday Silence, by Halo), whose own sire was the horse that ushered Japan into the upper reaches of the international arena. Both Deep Impact and Lord Kanaloa stand at Shadai Stallion Station under the auspices of the Yoshida brothers, just as Sunday Silence did.

In contrast, Lord Kanaloa was a world-class specialist sprinter–a rarity in Japan, which puts a premium on stamina in its racing program. Lord Kanaloa won 13 of 19 starts, mostly at 1200 meters (approximately six furlongs), but did stretch out once to 1600 meters (approximately a mile) to win the G1 Yasuda Kinen in 1:31.50. The horse also went to Hong Kong twice to win the G1 Hong Kong Sprint in times of 1:08.50 and 1:08.25, and if those clockings sound dazzling, check out these at home: 1:06.70 (record) and 1:07.20 in consecutive runnings of the G1 Sprinters S. at Nakayama.

Japanese turf courses, as these times demonstrate, tend to play on the hard side of firm, and perhaps this is one reason why the Japanese have tended to import and mix U.S. and European stock, blending the toughness and speed of the American dirt horse with the turf and stamina aptitudes of Europe. Both Deep Impact (from the German G1 winner Wind in Her Hair (Ire) {Alzao}) and Lord Kanaloa (from Lady Blossom (Jpn) {Storm Cat}) are such mixtures, and it’s certain that daughters of one will be bred to the other in the coming years. Deep Impact has two G1 winners from Kingmambo-line mares to date, while Lord Kanaloa already has two G1 winners from Sunday Silence-line mares and a total of five group winners (one from a Deep Impact mare) on the cross.

As we await the Kentucky Derby here and the 1000 and 2000 Guineas and their equivalents in Europe, the first Japanese classics are already in the books. Deep Impact is a classic-siring machine and his daughter Gran Alegria (Jpn) won the G1 Oka Sho (1000 Guineas equivalent) at Hanshin on April 7, covering 1600 meters in 1:32.70. And last Sunday at Nakayama, Lord Kanaloa’s Saturnalia (Jpn) won the G1 Satsuki Sho (2000 Guineas equivalent) in 1:58.10 for the 2000 meters. Undefeated in four starts, Saturnalia is from the Special Week (Jpn) (Sunday Silence) mare Cesario (Jpn), the G1 Japanese Oaks winner who came to the U.S. and won the GI American Oaks over 10 furlongs on turf at Hollywood Park in 1:59.03 in 2005.

Saturnalia is from Lord Kanaloa’s second crop, and last year at two he won the G1 Hopeful Stakes at Nakayama over 2000 meters. He stays the classic distances and is bred for it: he descends from a strong European family, and the sire of his second dam Kirov Premiere (GB) is Sadler’s Wells.

Saturnalia is Lord Kanaloa’s second classic winner and second-best runner. Last year, his first-crop daughter Almond Eye (Jpn) zoomed to stardom by winning the Triple Crown for fillies–all G1 races–and the G1 Japan Cup over 2400 meters at Tokyo against older horses in the sensational record time of 2:20.60. A Japanese Horse of the Year like Deep Impact and Lord Kanaloa, Almond Eye showcased her abilities against international competition on Dubai World Cup day at Meydan by winning the 1800-meter G1 Dubai Turf in the easiest of ways at a distance that was shorter than her optimum trip. She’s bred similarly to Saturnalia, too, from a daughter of Sunday Silence with a second dam by Nureyev (three-quarter brother to Sadler’s Wells).

Lord Kanaloa has another first-crop G1 winner in addition to Almond Eye. The colt Stelvio (Jpn) won the 1600-meter Mile Championship at Kyoto last year, and he is from a mare by Falbrav (Ire), a son of Fairy King – the full brother to Sadler’s Wells. Stelvio’s second dam is by Sunday Silence, so the similarities in the pedigrees of each of Lord Kanaloa’s G1 winners is striking.

Also striking is the Deep Impact-like beginning to Lord Kanaloa’s stud career, with many classics yet to be run this year. For comparison, after the Derby and Oaks at this stage of Deep Impact’s career with two crops at the races, he was represented by four individual classic winners: Marcellina (Jpn), winner of the 1000 Guineas equivalent in 2011; Deep Brillante (Jpn), Japanese Derby in 2012; Gentildonna (Jpn), Japanese Oaks in 2012; and Beauty Parlour (GB), French 1000 Guineas equivalent in 2012.

The latter was bred by the Wildensteins’ Dayton Investments Ltd., and it signaled the European recognition of the quality of Deep Impact, fully evident in Europe last year with Coolmore’s G1 2000 Guineas winner Saxon Warrior (Jpn) and Flaxman’s G1 French Derby winner Study of Man (Ire).

Canadian owner-breeder Chuck Fipke was a longtime patron of Sadler’s Wells, who sired his Gl winner Perfect Soul (Ire) and Perfect Soul’s unraced brother Not Impossible (Ire) – sire of Fipke’s homebred Queen’s Plate winner Not Bourbon. Fipke was an early believer in Sunday Silence, and his homebred Gl winner Tale of Ekati is from the Sunday Silence mare Silence Beauty (Jpn). Fipke, in other words, will go to any stallion that he believes in, and over the years he has sent mares to be covered in South Africa (Fort Wood, by Sadler’s Wells), Australia (Redoute’s Choice {Aus}, by Danehill), and Europe (Galileo {Ire} and others since Sadler’s Wells).

A few years ago, he sent his homebred mare Galileo Always (Ire) (Galileo–Always Awesome) to Katsumi Yoshida’s Northern Farm to be covered by Deep Impact, and the mare produced a filly by that sire in 2018 – bred on the exact cross of 2019 classic winner Saxon Warrior.

Fipke kept the mare in Japan to be bred to Deep Impact again this year after coming up empty to the sire for 2019, but when Deep Impact became unavailable with a medical issue this spring, a new horse was needed. We recommended Lord Kanaloa, but Fipke, who has his own ideas about constructing matings, is a painstaking researcher and put in his own work looking at a variety of stallions. Ultimately he agreed with our recommendation, and here are the salient points: Sadler’s Wells (and relatives) are prominent in the pedigrees of the best offspring of Lord Kanaloa; and there are at least 14 G1 winners bred on the Kingmambo/Sadler’s Wells cross, including G1 Epsom Derby winner Workforce (GB), a son of the recently deceased 2000 Guineas winner King’s Best (Kingmambo).

King’s Best was produced from the mare Allegretta (GB), whose Arc-winning daughter Urban Sea produced Galileo (and Sea the Stars {Ire}). Allegretta also happens to be the third dam of Fipke’s mare Galileo Always, and because she’s by Galileo, she’s inbred 3×3 to Allegretta–a mating designed that way by Fipke.

Breeding this Sadler’s Wells-line mare with two lines to Allegretta to the Kingmambo-line Lord Kanaloa checks a lot of boxes on paper, but Fipke also liked the speed that Lord Kanaloa brings to the mating, and he, like everyone else, was impressed by Almond Eye’s exploits last year. In fact, he got a chance to see her win at Meydan while there for the Dubai World Cup, and he got the notification from Northern Farm on April 13 that his mare had been covered by Lord Kanaloa the day before. The day after, Saturnalia won the first Japanese colts’ classic, heralding his sire as something special and confirming to Fipke that he’d made the best possible selection outside of Deep Impact.